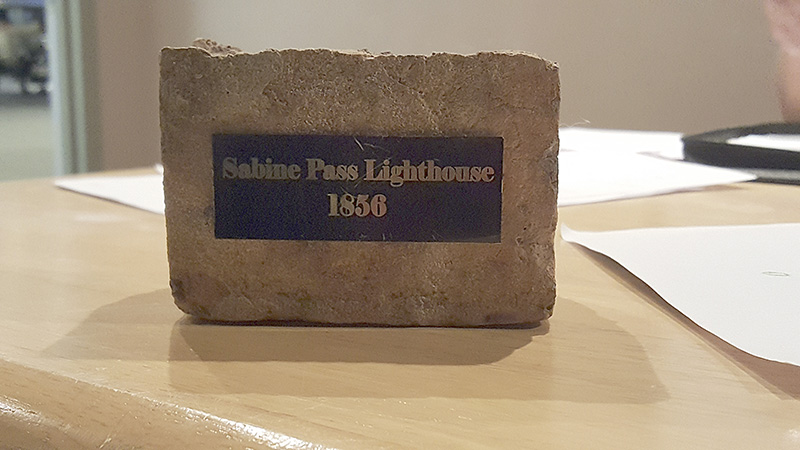 The New York-based International Chimney Corp. that was responsible for restoration at Cape Hatteras Lighthouse in North Carolina and which moved Gay Head Lighthouse from a steep cliff on Martha’s Vineyard is now heading to Louisiana in October to do work on the Sabine Pass Lighthouse.

A hurricane in 1886 caused the lighthouse to have cracks near the top and other storms, such as Hurricane Rita in 2005 and Hurricane Ike in 2008, caused further damage. In the 1970s, vandals stole the top portion, leaving the structure open to rain. 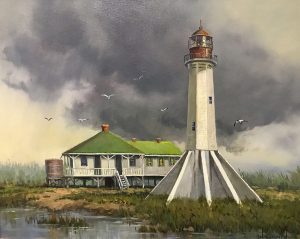 Cal Gaspard’s painting, ‘Sabine Lighthouse,’ is displayed on the first floor of the Museum of the Gulf Coast. (Ken Stickney/The News)

The stairwell is gone, a pile of rubble at the bottom of the structure.

International Chimney Corp. will add tension bands with turnbuckles for the cost of $130,000.

Tingler was asked what the group would ultimately like to see happen to the lighthouse.

“We’d like to see it turnkey but obviously that will take a long time and the whole restoration process will take about $3 million,” Tingler said.

There are grants available but they are competitive and come with a requirement of a matching dollar amount. Then there’s the idea that the Sabine Pass Lighthouse doesn’t rank high when compared to places like Portland Head Lighthouse in Maine, St. Augustine Lighthouse in Florida or Alcatraz in California.

The Sabine Pass Lighthouse went into operation in 1857. It remained operational for 95 years with the exception of a brief period during the Civil War when it was temporarily shut down. The light was permanently extinguished by the Coast Guard in 1952 when modern technology made it obsolete. The wharfs, keeper’s house and wooden outbuilding have all been destroyed by marsh fire. The Cameron Preservation Alliance is attempting to stabilize and restore the historical structure, according to the group’s website, sabinepasslighthouse.org.

A one-mile, 5K and 10K Lighthouse Run are set for Oct. 19 in Cameron, Louisiana to benefit the lighthouse preservation. For information on the run, go to runsignup.com and search for Lighthouse Run.

The event is entirely on the sand at Holly Beach and will start and end at Barataria Boulevard.

A number of art items linked to the lighthouse are being sold that benefit the lighthouse fund. Go to the Sabine Pass Lighthouse-Cameron Preservation Alliance Facebook page for more information.

Donations may be made on the lighthouse webpage and its Facebook page.