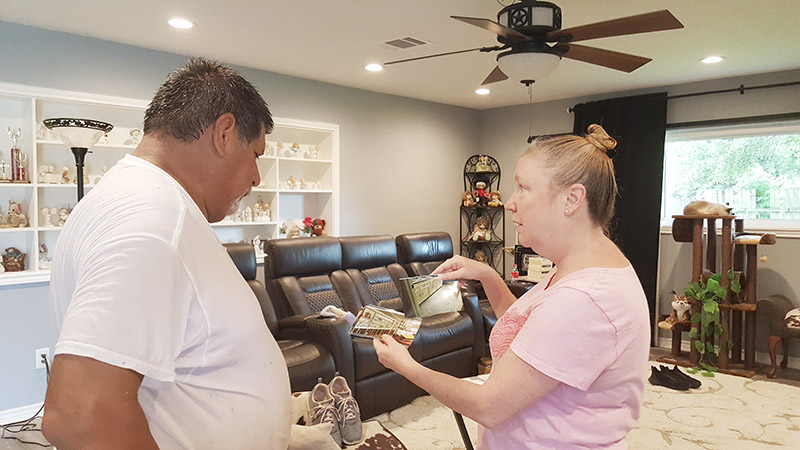 Anthony Gallegos and his wife Kandi go though photos taken as their home was being repaired after Hurricane and Tropical Storm Harvey flooded Port Arthur. (Mary Meaux/The News) 8-28-19

Anthony Gallegos was working in his yard, white T-shirt soaked with sweat, as clouds gathered and rain began to fall Wednesday. 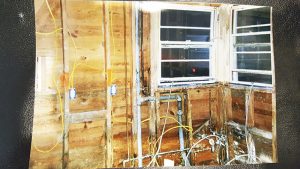 A photo shows inside the Gallegos’ home during repairs after Harvey. (Mary Meaux/The News) 8-28-19

The lawn was mowed and the garbage cans were moved to the road for pick up a good distance from his driveway, just like the other homes up and down the street.

It’s almost hard to remember what the neighborhood in the 3300 block of Platt Avenue looked like two years ago — but Gallegos remembers vividly. It took help from the Federal Emergency Management Agency and a significant dip into his retirement savings to make his home habitable again after Tropical Storm and Hurricane Harvey flooded the city in 2017.

Recovery from the deluge didn’t come overnight for the Gallegos family — it’s been a long journey and one that many southeast Texans likely understand.

Gallegos walks inside and called to his wife, Kandi, who was in another room as he spoke of that journey.

At one time there was a trailer parked in the front of the home — they lived in it for about a year-and-a-half while repairs were being made. Kandi still doesn’t like it when it rains hard, he said, while she said he didn’t like the small size of the trailer and often had trouble sleeping so he would drive around for hours.

Harvey left a lasting impact on their lives.

Getting the home back in livable condition took a lot and while gutting the home they found that the wiring had been spliced together, making for added cost. The ceiling was actually three ceilings; sheetrock and plywood and another material that disguised a leak they were not aware of initially. That too had to be fixed.

But this is another part of their story.

When Harvey came to town, Anthony stayed up watching the weather. Soon the water was coming into their home.

“I didn’t know the water was rising that quickly,”Kandi said. “Me and our daughter went to bed and he woke us and said ‘Pack a bag; we have to get out.’ But we couldn’t.”

Their daughter, then 21, grabbed their German Shepherd and her snake and loaded them into a Jeep while Anthony and Kandi put the two cats into their carriers and tried to escape. Water was reaching the floorboard of their vehicles.

“Water started coming up in the truck and the cats started screaming,” she said, describing the water creeping into the cats’ carriers. “It was one of the scariest sounds in the world.”

The water was cold, the couple said, while she pointed to her leg to show how high the water reached.

“This is an experience I never want to go through again,” she said.

They stayed at the very flooded corner of Memorial Boulevard and 39th Street for a while as rescue boats made their way down the highway. Later, they found themselves at Max Bowl, 3500 Regional Drive, which is where many of those rescued were brought by boat that night. They ended up staying about three weeks at their daughter’s friend’s house before the year-and-a-half in the trailer.

They received help rebuilding from a group of Mennonites, calling it a “big blessing.” The group of young men, ages 19 to about 25, did a lot of work and the Gallegos’ eagerly provided them with meals and cold drinks.

Kandi dug around and found several packs of photos taken during the rebuild. Photos of studs and new wiring and plywood seem odd compared to the freshly painted walls and new furniture inside the home today. The couple gave a quick tour showing where the water had partially engulfed the washer and dryer, the brand new ceiling fans, sliding barn doors to an upscale bathroom and numerous framed puzzles of elegant women that she assembled while in the trailer — something she did to pass the time while cooped up.

There’s still some work to be done — the game room still needs to be completed — but that can be done a little at a time.

They learned a lot from Harvey, including don’t trust out-of-town contractors and get flood insurance, which they did right away.

They also learned about the good in people.

“We learned there’s a lot of really good people out there,” she said.