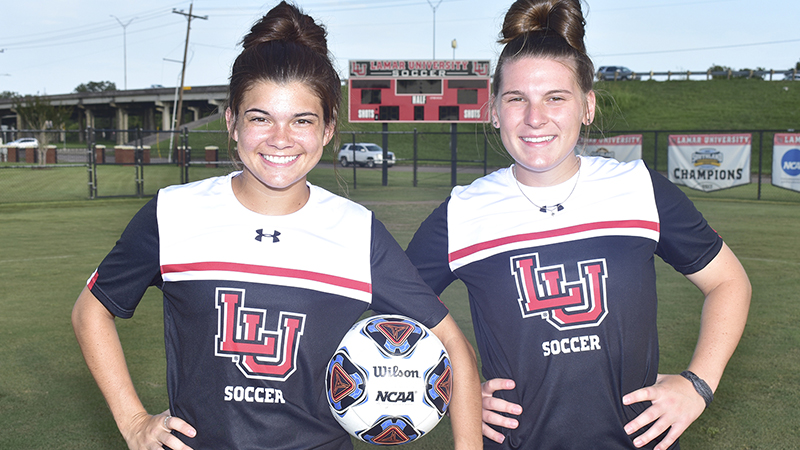 BEAUMONT — In the calm after the storm called Harvey, Madison Ledet of Nederland led Lamar to the Southland Conference tournament championship and was named MVP.

She was just a freshman.

Two short years later, Ledet is a junior. So is her teammate, Hailey Loupe of Port Neches.

So close they are, one attended the other’s signing day ceremony in February 2017.

“I met with the coaches several times and I really liked the coaching staff,” Ledet said. “I knew Hailey was coming. I met a couple of the other freshmen who were coming in, and I knew I liked the team. We came on a visit, and I really enjoyed the atmosphere and the people, so I knew this was where I wanted to go.”

Ledet and Loupe have welcomed another Mid-Countian to the Cardinals, freshman and recent Nederland graduate Meg Sheppard. The two juniors, though, came as part of coach Steve Holeman’s recruiting class following a 2-14-3 campaign in his first season and helped engineer a turnaround in Jefferson County to 18-4-1 in 2017 and 12-6-2 in 2018. Lamar lost to Stephen F. Austin 2-1 in last year’s Southland semifinals.

“Madison Ledet, she had an immediate impact on our program,” Holeman said. “She came in ready to go, and we had a feeling that she would. She was a starter from Day 1, and she’s been a dangerous winger for us.”

Two years later, Ledet has 10 goals on 35 shots on goal (26 as a junior) along with 13 assists. She took a shot on goal in Lamar’s season opener at home against Oklahoma State on Thursday, but she could not get the Cardinals on the scoreboard in a 3-0 loss.

Loupe recorded no stats in 22 minutes against Oklahoma State. She has played multiple positions at Lamar and has three career goals, two of them coming as a freshman, on 19 shots on goal.

“I played mostly in the midfield in high school,” Loupe said. “I’m not used to going from defense to offense and back-and-forth. The coaching staff, for sure, has helped me through it because I have Steve as an offensive coach and coach Henry [Zapata, an assistant] as a defensive coach, and of course, I have my teammates.”

Holeman said Loupe gives the Cards a spark off the bench as a utility player. In a preseason game against Rice, Loupe played outside back.

“She shoots the ball tremendously well for us, right-footed and left-footed,” Holeman said. “Just based on our needs and what we saw, we started with the idea of her playing back, and she’s done well there. Whatever we do with her, she’s always had a great attitude about it and wants to do whatever she can to help the team.”

Holeman expects Sheppard, who led Nederland to the 4A Region III semifinals along with PNG last spring, to compete for a starting role, adding she’s good enough to start now but had no collegiate game experience before Thursday. She played 31 minutes against Oklahoma State.

Lamar is in a homestand that includes a Thursday afternoon meeting with Southern Miss and Sept. 1 battle with Alabama.

“Our motto is, ‘Bring it back,’” Loupe said. “So, hopefully, we’ll bring it back like we did our freshman year. That’s what we’re hoping for.”