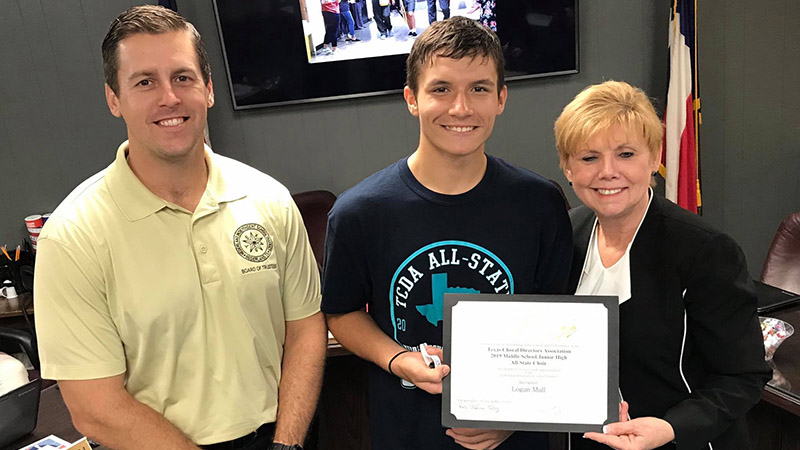 Logan Mull has heard the question many times: Do you think you can be a professional singer?

When I had my turn to ask the 14-year-old Nederland High School freshman, he was resolute in his answer.

He wasn’t being cocky. In fact, during our Friday morning conversation, Logan truly came off as a down-to-Earth teenager with big dreams.

District officials said more than 1,800 middle school students from across Texas auditioned, and 200 students were selected.

Logan was told he was the only bass selected between here and Houston.

The group’s one performance came under the direction of prestigious choir director Tom Shelton at the Henry B. Gonzalez Convention Center in San Antonio.

“It sounded so good; it was amazing,” Logan recalls.

The unique experience leaves Logan with feet in two worlds.

For one, he was happy just to be there, accepted as equal to stand shoulder-to-shoulder with 199 other talented vocalists.

He’s also antsy, knowing there is “room to get better” as he pursues lofty ambitions of musical stardom.

Logan said he still shakes a little when taking the stage, joking that he doesn’t calm himself by picturing the audience in their underwear, but rather pictures himself singing alone in his room.

He readily admits he got his start singing Kidz Bop tunes in the car with his mom, Amanda. His affinity for country music brought him out of the children’s bin and into the adult charts.

“We started listening to country music because that is my taste in music,” Logan said. “We would always jam out to Tim McGraw, Jason Aldean and all of them.”

He took the stage for the first time during a third grade talent show at Helena Park Elementary School, performing “When She Says Baby” by Jason Aldean.

That beginning all led to his invitation to join the Texas Middle School All State Choir this summer.

“That is my greatest accomplishment that I’ve had throughout my entire life,” Logan says. “We were actually at a UIL competition. We won sweepstakes that day.

“I came up to my choir teacher and asked if the all-state people had texted. She said, ‘I don’t know, let’s check my email.’ So we started going through the emails and we found it. I was the only one who made it.”

Logan said he started crying tears of joy. The first person he called? That would be his old singing buddy from the Kidz Bop days.

“I called my mom, and we talked until we got back to the school that day,” Logan remembers.