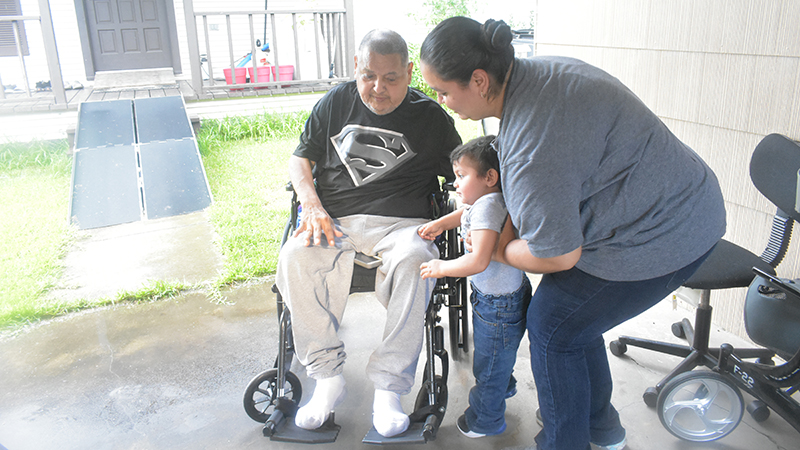 Sherry Miranda, right, lifts Jadiel up to place him in his grandfather Jessie Avalos’ lap. Avalos is now in a wheelchair after his cancer treatments were stopped. (Mary Meaux/The News)

A group of local cancer patients are heading to court to get their medical records released after a dispute between their oncologist and The Medical Center of Southeast Texas.

The patients, and their families, gathered Wednesday under a carport outside of a home in the 1100 block of Lamar Avenue in Nederland with Dr. Trip Chaudhury and Houston based attorney Gary Riebschlager.

Rain fell lightly on the tin roof of the carport adding to the somber mood as Riebschlager claimed that The Medical Center had closed its doors on the cancer patients thus denying them treatment.

The lawyer also claimed the hospital is in trouble and under investigation by the Centers for Medicare and Medicaid Services and Texas Department of Health and Human Services.

Chaudhury contends the Cancer Center, owned by The Medical Center, has flooding issues since Hurricane and Tropical Storm Harvey. He provided a short video to media at the press conference showing a portion of a linear accelerator radiation machine with water under it. The power lines to the machine are 220 voltz, the attorney said.

Seated in a wheelchair wearing a black and white Superman t-shirt, Avalos held his youngest grandchild Jadiel in his lap. He was unable to place the child there so his daughter Sherry Miranda did so for him.

Avalos has a tumor mass on his lower abdomen and near his spine. He had undergone 31 sessions of chemotherapy and radiation and was nearing the end when the Cancer Center shut its doors.

“My legs don’t work and my arms work very little, I can push a wheelchair but I can’t play with the grandkids, can’t pick them up and love on them. They’re used to being in my lap,” Avalos said as a tear crept down his cheek.

He feels like his medical records are being held hostage and he admitted, like the other cancer patients, to being scared.

“I’m 61 years of age. I’ve worked all of my life and now I can’t do none of that. I sit in a wheelchair; my daughter puts me in and takes me out. This is something I wouldn’t wish on anyone. I was 15 sessions from being done, I was on the downhill.”

Jeffery Shield was nearing the end of his treatments for a cancer of the head and neck when the center closed suddenly.

The Port Arthur man, who was there with his wife Carlina, worries about the risk of the cancer coming back.

His wife called a few other treatment facilities but they won’t see him unless he has his medical records.

“It’s a nightmare. Neither of us can sleep at night anymore. The grandkids ask if pawpaw got his treatment yet,” Carlina Shield said.

Alton Guillory, 66, was battling esophageal cancer when the treatments stopped. He and his wife Janice of Port Arthur worry abut their future.

Guillory said he was getting his treatments daily and had just a week-and-a-half left to go.

“All of a sudden I go to the place and they’re closed,” Guillory said.

Janice Guillory said the doctor had told them how important it is that he continues his treatments through to the end.

The Port Arthur News reached out to The Medical Center of Southeast Texas who is in the process of crafting a response.