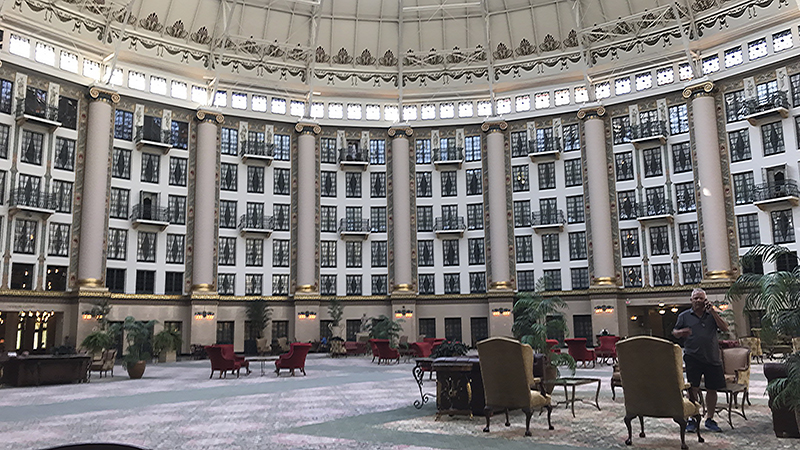 As my wife readily acknowledges, I will go anywhere to play a highly regarded or intriguing golf course. Anywhere.

Over the years that affinity for the best in golf has led me to Scotland, Ireland, Barbados, Cypress Point, Pine Valley, Augusta National and many of America’s most celebrated and storied courses. Recently it brought me back to two all-time favorites in French Lick, Indiana.

All that and more in French Lick and neighboring West Baden Springs, with a combined population just shy of 2,400.

The hook that lured me to Southern Indiana in 2013 was a staggeringly beautiful and brutal piece of work by Mr. Dyeabolical himself. Named the Pete Dye Course at French Lick, it offered crazy elevation changes, breathtaking vistas estimated at 30 to 40 miles, dramatically plunging slopes, narrow fairways, undulating greens and something called “volcano” bunkers.

In short, it was the most spectacular course I’d ever seen that wasn’t next to a major body of water or tucked into mountains. Corroboration of that feeling came recently from a Golf Channel site called Golf Advisor in its listing of the 50 most beautiful courses in the world with public access.

The Pete Dye Course at French Lick was No. 10. Only four public access courses in the United States — The Ocean Course at Kiawah Island, Whistling
Straits in Wisconsin, Manele Golf Club in Lanai, Hawaii and Pebble Beach —
were considered more beautiful.

Meanwhile, because heavy rain put a damper on my first visit to French Lick, I had vowed to get back at the first opportunity. That opportunity came in June. This time the weather cooperated and the entire experience was sort of like Disneyland for a golfaholic.

The Dye course was everything I’d remembered and its sister layout — The
Donald Ross Course at French Lick — was even better than I’d recalled. Built in 1917 and host of the 1924 PGA Championship won by Walter Hagen, it was classic old time golf architecture.

Recently restored to its original specs, it offered little in the way of frills but brought distinct challenges on every hole. Greens sloped hard from back to front, the deep face bunkers were daunting and the variety of holes and shots required was fascinating.

Ross, for those who don’t know, was a Scottish-born course designer whose signature is on over 400 courses. Among his most noted layouts in America are Pinehurst No. 2 in North Carolina, East Lake in Atlanta, Ben Hogan favorite Seminole in Florida and Oakland Hills in Michigan.

My long time golf buddy Ron Ashworth, who belongs to iconic Medinah in Chicago, could not stop raving about the Ross course. He even drove back a couple of weeks later from his home in St. Louis specifically to tee it up on Ross.

A local footnote to Donald Ross, by the way, is that Sunset Grove Country Club in Orange is one of only two courses he built in Texas. The other was Houston’s River Oaks.

You don’t go to French Lick just for the golf, however. At least I didn’t.
Part of the experience, and I have to keep coming back to that word, was staying at the West Baden Springs Hotel. It is safe to say there is not another hotel quite like it.

Built in 1855 and given an extensive renovation in the 1990s, it looks like a mini Houston Astrodome. Indeed, it was the largest freestanding dome in the world until the Astrodome opened in 1965. It was at one time known as the Eighth Wonder of the World.

The atrium is 200 feet in diameter and features a fireplace which burns 14-foot logs. Four levels of rooms and suites overlook a floor area offering elegant furnishings and dining space.

It is impossible to have dinner and not gawk. Some — not me — have been known to go to the center of the atrium, lie down and clap their hands to hear the echoes that reverberate.

Just as Ross is the sister course to Dye, there is an even bigger sister hotel — the French Lick Springs Hotel that is less than a mile away. It’s sits adjacent to a 51,000 square foot casino. You can move from one hotel to the other via a 1930 diesel trolley built in Portugal.

French Lick had become a destination resort in the mid-1800s because of what was believed to be the healing powers of its mineral springs. It was so popular around the turn of the century that trains ran regularly from Chicago and Louisville and as many as 14 illegal gambling houses opened for business.

The Chicago Cubs and Pittsburgh Pirates even held baseball spring training there for a few years in the early 1900s. Matter of fact, the Cubs trained
at French Lick in 1907 and 1908 on their way to becoming World Series champions. It would be over 100 years before they won it all again.

Dye came on the French Lick scene in the early 2000s as part of a $500 million revitalization project undertaken by entrepreneur Bill Cook.

Cook, who in 2008 was considered the wealthiest man in Indiana, selected Dye as the architect of choice to build a dream course on 400 acres of property called Mt. Airie.

It almost didn’t happen. After stalking the land, Dye told Cook the terrain was too intense and severe for a golf course. Then he had second thoughts, diagrammed 18 holes on a napkin and told Cook he was in.

By the time the project was finished, he’d moved 2.5 million cubic yards of dirt and spent $28 million.

“It was an unbelievable site,” Dye was quoted as saying. “I had never seen anything remotely like it, with such dramatic changes of elevation. There was so much area you could make it anything you wanted. The biggest challenge was to make it walkable.”

In the end, Dye delivered what he so often has — a harsh, photogenic and difficult course that is truly memorable. Between him and Donald Ross, the West Baden Springs hotel and all the history, French Lick is truly a bucket list destination.
•
Coming up: Bob West’s Chip Shots