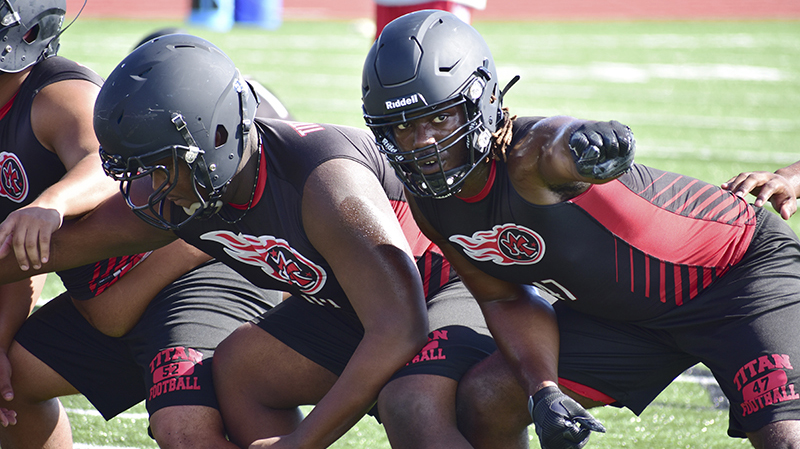 At 6-feet-3 and 240 pounds, Memorial junior Jordon Thomas hears from others that he could pass for a college junior.

“A lot of people told me that,” he said.

Right now, Thomas is happy pass-rushing quarterbacks. By December 2020, if not February 2021, where Thomas commits to playing college football could become big news.

Just Sunday, he said, a recruiter from Ohio State had talked with him. Florida has called him as well, and so have the big-name programs in Texas. Right now, Thomas said, he is leaning toward Texas A&M.

His name has been out there, his position coach said, as has his ability.

“By him powerlifting as he does, he put his face and name out there, and everybody knows him,” Dwight Scypion said. “When people see him, they know that’s Jordon Thomas from Port Arthur Memorial.”

A sweltering Monday afternoon in Port Arthur marked the beginning of the Titans’ preseason camp, so Thomas and his teammates would have no issues with the brutal heat, especially that rising from their new on-campus turf. Before this year, the Titans would take a bus to Memorial Stadium for most of their practices.

Thomas made a seamless transition from blocking tight end duties as a freshman to earning five sacks and 32 total tackles as a sophomore. Last season, he played alongside District 9-5A Division I and The News defensive player of the year Lazarus May, who signed with Tulsa in February, but Thomas is now the tower among the Titans’ defensive line.

“Once I switched to defensive end, I was like, ‘Man, this is home right here,’ because I get to hit people constantly,” Thomas said.

As a blocking tight end, Thomas didn’t get to catch any passes.

“Ooh, I didn’t like it,” Thomas said, eliciting a laugh.

His football journey nearly ended at age 10, when he quit the Little Titans’ Pop Warner program.

“I was there physically but not mentally,” Thomas said. “It was just running. I was just a chubby kid. I didn’t really like all that running.”

He decided then that was the last time he would quit on anything.

“It stayed in my mind. I don’t really like quitting, especially on a team, so I had it in my mind, when I was in sixth or seventh grade, I was going to try out for football,” he said. “I’m glad I did. Ever since then, I’ve just been going up and up.”

Funny how little Jordon didn’t like to run because he was big into track and field at Thomas Jefferson Middle School, Scypion said. Today, he uses his quickness off the snap to give quarterbacks and other playmakers fits.

“A junior like that, you try to set goals for him to do the best he can on every snap that he takes, get out there and work hard every day and do what he needs to do, just to be the best he can be,” Scypion said. “I always try to tell him, don’t shortchange yourself. Always do everything you can to improve yourself to get better, because as long as you’re doing what you need to do, a lot of people are going to see you and they’re going to know you by name, by face.”

“He’s going to be all right. That’s what I always tell him.”