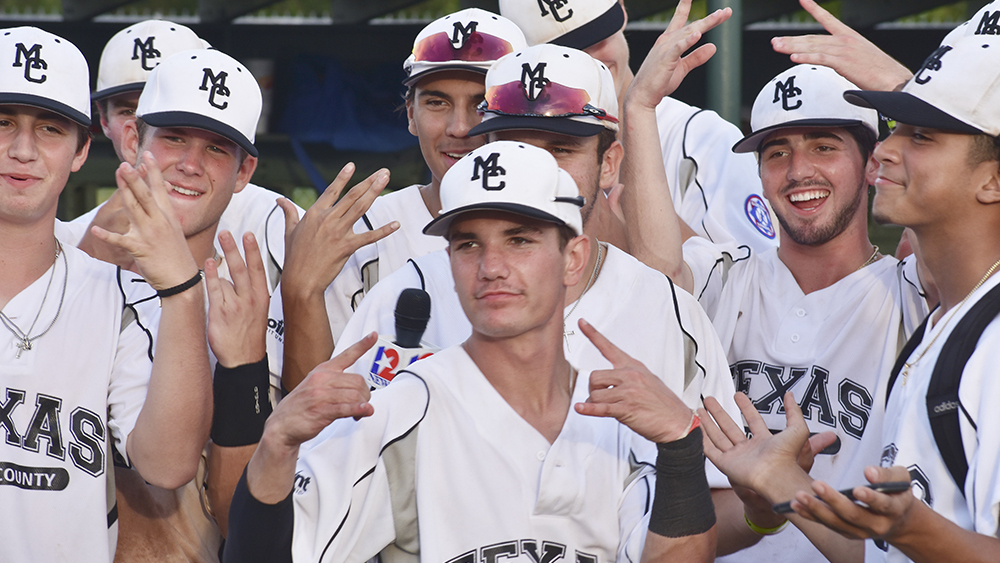 So far, the recent Nederland graduate has done something about it.

“That’s all we’ve been preaching since the regional tournament,” Hiltz said. “It’s worked out well for us, and we’re going to keep it going.”

Hiltz is batting .571 (8 of 14) and has scored five runs in helping Mid-County win the National Division in pool play. As a result, the Nederland-based team is standing only two victories away from a second championship in three years.

Mid-County earned a bye from Wednesday’s first round of bracket play — which has been postponed to this afternoon due to rain in Mobile, Alabama — and will take on either Onondaga, New York, or Cape Cod, Massachusetts at 7:30 tonight. The championship game is scheduled for Friday at a time to be determined.

The tournament games can be streamed at jockjive.com/baberuthbaseball.html (subscription based).

“It’s always good to have that day off to get your pitching staff set, get them on their feet and play,” MC manager Ben Rogers said. He said tonight’s starting pitcher will depend on the winner of Onondaga vs. Cape Cod, the latter of which lost to Mid-County in the 2017 BRWS final.

Mid-County (12-1) shelled out 14 hits in 29 at-bats in Tuesday’s 7-1 win over Bakersfield, California, to clinch the division. Hiltz went 3 for 4, while Port Neches-Groves senior Carson Roccaforte batted 2 for 3 with two RBI and two runs and threw a complete-game victory.

The good-luck pebble Roccaforte shares with fellow pitchers and Indians teammates Austin Schaper and Grant Rogers apparently has not lost its power.

“He’s playing really well,” Rogers said. “When he was pitching, he was telling the bottom of the order, ‘Come on and got to do your job. He got what he wanted.’”

The pebble might have gotten Roccaforte going at the plate as well. He has been hitting .545 (6 for 11) with eight RBI and five runs scored. One of his hits in Mobile was a three-run home run.

Mid-County totaled 22 hits in its 4-0 run through the Southwest Regional in Nederland.

“They just want to compete,” Rogers said. “Against Indiana, we didn’t come out sharp. We didn’t play very well. They got together and talked amongst themselves. I don’t know what was said, but when they came out against California, they were totally different.”

Hiltz knows what was said.

“Thank you, coaches, family, and everybody that helped me get to where I am now!” Yadon tweeted.