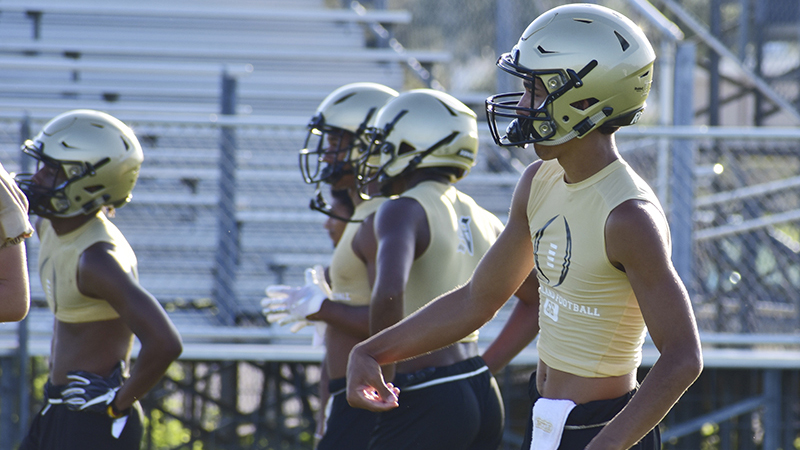 NEDERLAND — When Blaysin Fernandez could not go on due to injury, stepbrother Bryce McMorris took over Nederland’s offense.

“It’s going to help me out a lot this year,” McMorris said. “Getting playing time last year helped me, and I’ve grown a lot since then.”

McMorris is actually a second-year starting quarterback for the Bulldogs going into preseason camp, but 2019 is what the senior calls his time to shine. He earned it through a successful season-long audition last fall, helping Nederland start 9-0, win a share of the District 12-5A Division II championship and leading the Bulldogs to a hard-earned playoff win over Fort Bend Willowridge.

“I’ve been waiting since my sophomore year for my time, and now it’s here,” McMorris said. “I’m ready.”

“A lot of kids go into it [where] if they’ve never been under the Friday night lights, especially in the position of quarterback, the unknown is there,” he said. “It’s not there with him, from the experience he has, and I think not only him but the rest of our team recognizes that, and they have the confidence in him to get the job done.”

Fernandez wrapped up his career a three-year starter and Christus All-Star. Despite numerous injuries, some during practice and some in or just before the game, he threw for more than 1,000 yards as a senior, while McMorris finished nine of those games and totaled almost 800 passing yards. He fired for 226 yards against Willowridge last November.

“I think I really know the offense like the back of my hand,” McMorris declared confidently. “I’m ready for this year. I’m ready to go.”

Barrow has been happy with the Bulldogs’ ability to retain most information, especially given they practiced non-contact drills during the summer. The Bulldogs return five starters on both sides of the football.

“All coaches hope when they start that first day that their attention span is there from what you do in the spring through the summer,” Barrow said. “We don’t slow down. We kind of throw everything at them and see and know what they’re having trouble with.

“Offensively, I felt real good about where our attention as far as that goes. Defensively, we do a lot of different things, and it takes a little time for us to get adjustments down. It’s harder for those guys because, offensively, we say exactly what we want to do. Defensively, you’re dictated by what the offense is doing. When they motion, you do something, but pleased with where we are as far as learning. … We’ve got to move on and make new mistakes.”

The return of junior Kade Scott from a season-ending collarbone break also has given the Bulldogs’ offense a boost. Scott nearly went for 1,000 rushing yards before he was hurt eight games into the season and was healthy enough by February, Barrow said, to resume football activities.

Nederland is following a trend of teams practicing within a span of up to four hours in the morning with a break midway while school is not yet in session. Many programs have gotten away from the two-a-day format and, in recent years, spent more time with classroom and film instruction during the first session of the day and full practice in the second session.

“If you get it done and you’re done by noon or whenever it is, it gives the athlete the entire rest of that day and night for their bodies to recover,” Barrow said. “That’s such a big thing right now with what they put their bodies through. We’ve learned so much about how body recovery is such an important thing. I think that’s why there’s been a big shift in why teams do it this way.”

The morning routine does not seem to take a toll on the players’ endurance, thanks in part to summer drills.

“Coming out, being strong, not having to be laying over every day, really works out,” senior cornerback Logan Nguyen said. “Nobody’s throwing up right now.”