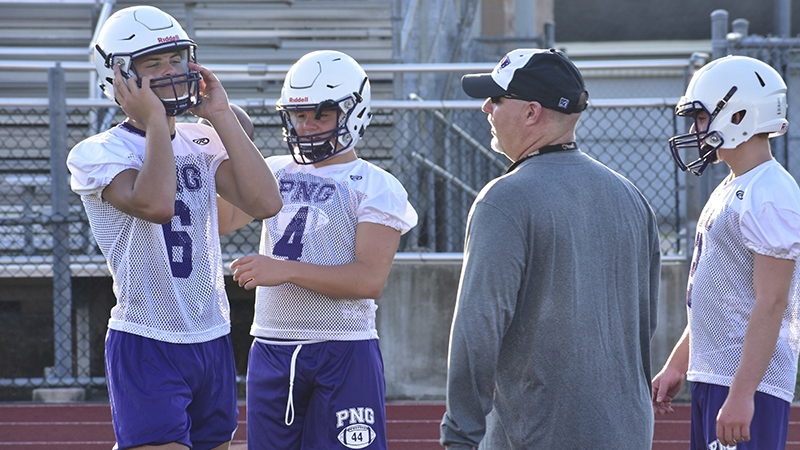 PORT NECHES — The head coach at Port Neches-Groves said he was satisfied with the first day of preseason camp, but it’s not the first day that’s the biggest challenge the team will face. 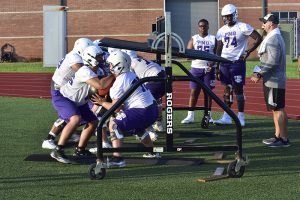 “The challenge is going to be having a great second day, having a great third day,” Brandon Faircloth said Monday morning. “That’s where you start separating yourself as a football team, is when you can string a bunch of great days together. … I’m not going to hang my hat on having a great first day.”

Faircloth, in a way, kicked off his 11th season at The Reservation with no shortage of experience returning. Six starters on offense and five on defense are back from a team that went 9-4 but won its fourth straight share of a district championship, the first in District 12-5A Division II.

“Everybody had great energy,” junior quarterback Blake Bost said. “It was just a great practice.”

Faircloth said the Indians benefited from sport-specific skill drills one hour per week, as permitted by new UIL policy. Teams could conduct no more than two hours per week of such drills, but no more than one hour in a day.

“We got to work on some things in our hour of practice that we did today, so it makes things run a lot smoother when everyone knows what to be prepared for.”

Bost, a left-hander who saw playing time last season behind current University of Texas freshman Roschon Johnson and 2019 graduate Grant Rogers, helped PNG qualify for the 7-on-7 state tournament this summer. Bost played the entire second half against Baytown Lee last Sept. 28 and completed 7 of 8 passes for 78 yards and two touchdowns. He also ran for a touchdown in the bi-district playoff against Houston Northside.

“I’m a lot more comfortable knowing that I’m the leader of this team,” Bost said. “Everybody’s looking at me to make a play and lead them to victory. It’s just a better feeling.”

Faircloth said he knew from the time Bost played in middle school he’d have a chance to succeed Johnson, a three-time district and The News Super Team MVP who ran and passed for 169 touchdowns and 12,452 yards.

“When he came up through middle school, he’s always been a great player,” Faircloth said. “When he got to high school, he was an extremely hard worker. He’s a leader, very dedicated to being a great quarterback.”

Faircloth moved Bost into the varsity roster after Johnson was injured against Huntsville and Baytown Lee. Johnson is expected to have a teammate join him in Austin as right tackle: Jaylen Garth plans to sign with Texas in December.

Fourth-year varsity player Gavin Deslatte is switching from running back to linebacker, where he played in freshman football, and moving senior Zane Hernandez to the backfield from safety. That is not to say, Faircloth cautioned, that Deslatte won’t make any carries this season.

“Every year in high school football, you have to make personnel adjustments to help your team win,” Faircloth said. “We lost some good linebackers last year, and Deslatte is definitely a guy who can step over there and fill that role. … Zane moving over from safety, I feel like we have some guys coming back who can fill those roles and some guys from the JV.”

Hernandez can also play receiver and was quarterback in freshman football.

“Gotta touch up on some things, build up each player and get them to their best potential and put all the pieces together,” Agudelo said.