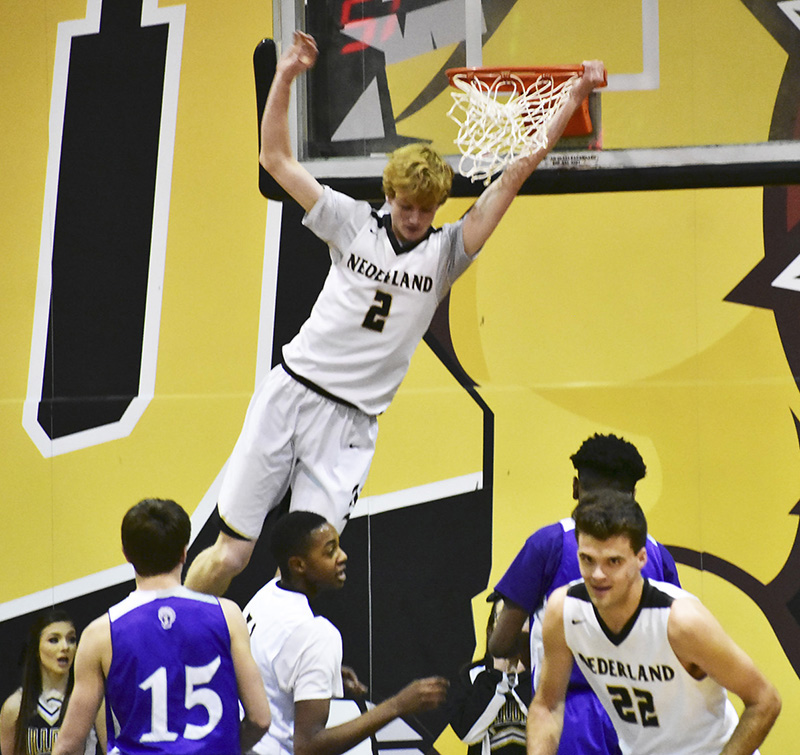 Nederland junior Hayden Hefner supports himself on the rim after a two-handed slam against PNG in the first quarter on Dec. 21, 2018, in Nederland. (I.C. Murrell/The News)

Hayden Hefner didn’t expect to draw a college offer after his first summer with the Houston Defenders AAU team.

Once the Nederland swingman did, his family helped him enjoy high school and the recruiting process at the same time, he said.

“The help of my family helped slow down the summer for me,” Hefner said.

The summer going into his senior year at Nederland marks the culmination of a three-year recruiting process, because Hefner verbally committed to Texas A&M via Twitter on Sunday. Hefner posted photos of him wearing an authentic throwback A&M jersey and of Reed Arena, the Aggies’ home gymnasium in College Station.

“I don’t think anything could really change my mind,” Hefner said. “My whole family went to A&M. I have a cousin there. My sister’s about to graduate next May. Even if I weren’t playing basketball, I feel like I would go to A&M.”

Brian English said that the 6-foot-5, nearly 175-pound Hefner is the most sought-after recruit from Nederland since he took over as head coach in 2006. Recent professional signee Colton Weisbrod, a 2014 graduate, landed at the University of New Orleans before transferring to Lamar State College Port Arthur and then Lamar University.

Hefner drew offers from Lamar, Houston, Tulane, Incarnate Word, Rice, Texas and Oklahoma, but getting to know Aggies coach Buzz Williams proved to be a difference-maker in his selection. Williams, a north Texas native and former Marquette coach, was hired in the spring from Virginia Tech after leading the Hokies to the NCAA Sweet 16.

“For me, I thought about it for a long time, but it was knowing Coach Buzz was going to push me to my limit,” Hefner said. “I know if I reach my full potential, then the sky’s the limit, and he would be a great person to do that for and to do that with me.”

It’s that ability to score that sets Hefner apart from others, English said.

“He’s still got to improve, but he’s got an IQ that makes him who he is,” he said. “He’s going to have to continue to get in the gym and work on his shot. He does that, [then] the sky’s the limit because where I think he’s really elite is around the rim himself. He’s smart, dedicated and he’s different. Not many kids like him who can do many things at a high level.”