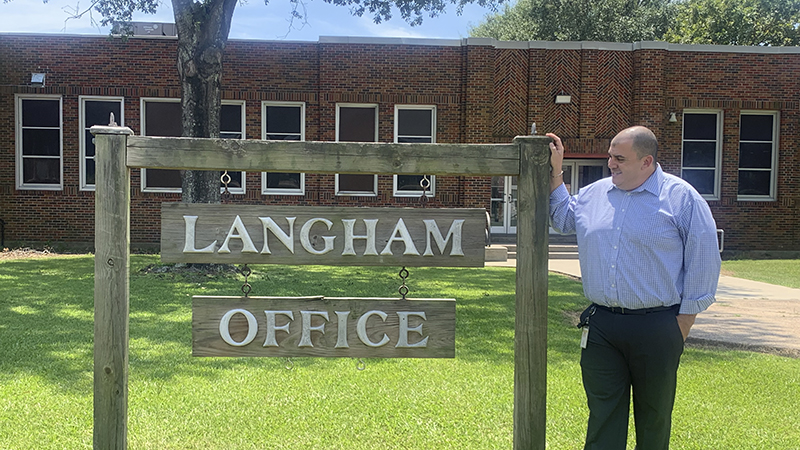 “Somebody once told me that it’s OK to be where you are, but it’s not OK to stay that way.”

Toby Latiolais, new principal for Langham Elementary in Nederland, said he sticks true to these words as he steps into his new role as educator and mentor with one thing on his mind — growth.

“Our theme for this school year revolves around the idea that everybody has a superhero inside them, and with our staff, they are the ones who are training the superheroes,” he said. “With everybody, regardless if they’re in the gifted and talented program, the life skills program or anything, everybody has an individual gift.

Latiolais said he entered the elementary scene with 10 years experience as a football coach and English teacher with a combined four years in administration, three as an assistant principal at Nederland High School and one year at Highland Park Elementary, before accepting the job at Langham in July.

“I’ve always kind of wanted to be at the elementary level; it’s just always where I felt like I belonged,” he said. “It’s hard when you’re coaching because there aren’t a lot of opportunities to coach varsity football and be on the elementary campus during the day. I was kind of tied to the secondary level, but when that position opened up at Highland I moved over there and I loved it. Then this position opened up and it was just the right fit, felt like something I wanted to do.”

Latiolais said that his love for the elementary ages comes from a long history and past with being around younger kids.

“When I was younger, I umpired Little League games and sometimes that meant umpiring the softball games of people who were like two years younger than me, but most of the time it was umpiring for the lower level 7- and 8-year-olds,” he said. “I enjoyed being around the younger kids and those relationships with them. I always felt drawn to it.”

A major pull to be a principal was the also the need to be a male role model for younger students, Latiolais said.

“Today, you have more single-parent homes,” he said. “A lot of times the single parent is the mom and at the elementary level, generally speaking, there’s not a lot of male figures that are there. A lot of times, the male is the P.E. coach or something like that, which is important but you don’t have a lot of male classroom teachers or people in positions where kids see that they value education. They still need to see a male in a position that says, ‘Your education is important.’ There needs to be someone in the school, so that’s been a draw for a long time.”

Latiolais said he finds himself in a unique position with Langham already being established as academically successful and will also instead to focus on fostering stronger relationships.

“It’s not often that you get an opportunity to come into a school that is already really high achieving,” he said. “Obviously, we really want to maintain that but one of my big goals is the relationship piece of it. I want to build relationships with the students and staff.

“We want to foster that within the community. Build strong ties with the businesses, the community members and the families and enhance that aspect of it. We want to make everyone feel included in the school community. It’s not just operating within these walls, but the surrounding area, too. We want everyone invested and rowing the boat in the same direction.”

Although Latiolais no longer coaches professionally, he said he finds a balance between being an educator and being stern with being goofy and having fun.

“We have to find a balance between working hard but having fun while doing it,” he said. “That’s really my goal with being at Langham — finding that balance, making sure they are having fun and also being successful academically.”