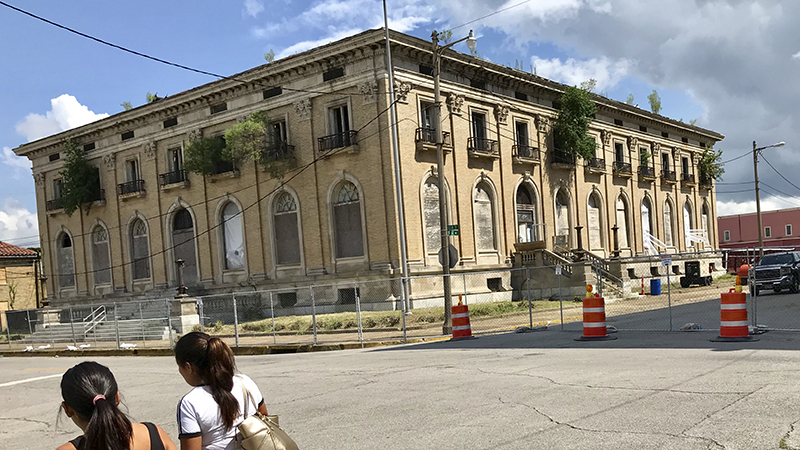 He said Motiva, which has purchased the building at 500 Austin for office space, had to gain initial clearance for its plans for the building from state and federal agencies. The building, designed by the U.S. Treasury Department, was created as a Post Office and completed in 1912 at a cost of $120,300.

It was built with “sand-colored brick and graystone trim.” The post office was moved to another location in 1965, although it continued to house other federal offices and eventually decayed and closed.

“What we’re seeing right now is staging in the Federal Building,” Burton said.

Work crews are putting up air protection for the abatement process so that passersby won’t suffer ill effects from what will be continuing work.

Burton said city officials are conferring about street closures not only on Fifth Street but also on Austin so patients using the city’s Health Department — it is also located at the same intersection — won’t be adversely affected by the construction work.

“As long as they have taken necessary preventive measures, making sure the air inside is contained, it won’t pose a threat to pedestrians,” he said.

He said Motiva is also moving ahead with planning for the 1926 Adams Building, 440 Austin, a six-story building not currently on the Federal Register. Motiva officials have said the company plans to seek Federal Register status for that building, too. Burton said he hopes to hear more from Motiva in early autumn.

Burton said one concern for the Federal Building is its roof, which is collapsing. He said Motiva, which must submit plans for review to the city’s Department of Development Services, has not done so yet.

Motiva has acquired three of four buildings — the Federal Building, the Adams Building and the A.E. Scott Furniture Co. — at the intersection of Fifth Street and Austin. Motiva and the city are discussing the company acquiring the fourth and final building at the intersection, the former Merchants National Bank, now used as the City of Port Arthur Health Department. The city has had the building inspected for structural integrity; it is sound, Burton said.

Thus far, Motiva plans to invest about $150 million into reclaiming the Federal Building and the Adams Building, where it plans to house about 500 office workers. The company would likely close most offices at the plant site on Savannah Avenue and move office employees downtown.

The company has completed its acquisition of the Scott Furniture store from private owners, Burton said.

Talks continue between the city and Motiva for land near the Federal Building that would be used for parking for offices there. The Adams Building, too, needs parking facilities.

Burton also said the city and Motiva continue to discuss the possible sale of the Hotel Sabine, the vacant 10-story building on Procter Street built in 1929. He said the city has gotten an appraisal and is reviewing it.

“Both parties are working together right now,” he said.

Christus Health said it would donate the land to the city, which Burton said the city would likely accept.