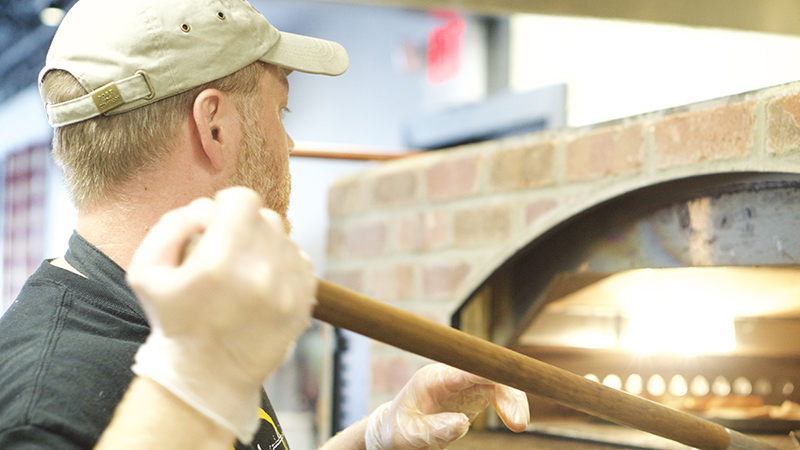 Brick Oven Pizza specializes in gourmet pizzas that are handmade and cooked in a brick oven, their signature thin-crust and homemade ingredients separate them from other pizza locations. (Cassandra Jenkins/The News)

Signature thin crust, homemade sauce, fresh mozzarella and ingredients made from scratch all sit on a pan cozy in a brick oven, melting and mixing to perfection — hungry?

These are just a few qualities that make up the new location of Brick Oven Pizza on Nederland Avenue. The store accompanies other Southeast Texas locations such as Lumberton and Bridge City, marking it as the sixth in Texas and 14th store overall.

“We offer thin-crust pizza,” general manager Andy Pillitieri said. “We have 18 different varieties on our menu and we also build our own pizzas. But, we’re not just pizzas. We have appetizers like spinach dip and stuffed mushrooms. We have salads and sandwiches. We also offer cauliflower crust and broccoli cheddar crust that are great for people on the Keto diet.” 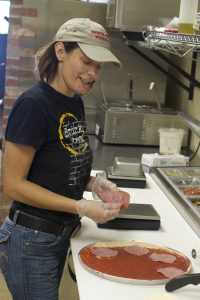 Pillitieri said signature aspects that set Brick Oven apart from other pizza joints are the brick oven, dough made from scratch, fresh ingredients and service.

“Everyday we make our dough fresh,” he said. “We make our spinach dip from scratch everyday, our ranch made from scratch and are salads. We make a lot of our products homemade every day. But what makes us so special is how we cook our pizza. We have bricks inside the oven, on top, bottom and sides, which keeps it evenly heated.”

It takes approximately 16 minutes to cook a Brick Oven pizza, Pillitieri said. A process that is called ‘bricking.’

“We do eight minutes in a traditional pizza pan and then we brick it,” he said. “Which means that after the first eight minutes we will let the pizza out of the pan and let it cook on the brick. That gives it the consistency and that nice crust that is crunchy but not too hard.”

The inside of the restaurant sports several Texas style paintings including one for the Houston Astros, Texans, Rockets and a ‘Don’t Mess with Texas’ sign align the walls next to an American flag and Texas flag made entirely from license plates.

“All of these paintings were hand drawn by a gentleman called Ace Walker,” Pillitieri said.

Pillitieri said he did not know much about Nederland or the community when he came. 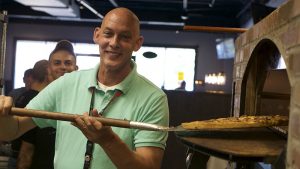 General manager of Brick Oven Pizza in Nederland Andy Pillitieri says the community has welcomed him and the restaurant with open arms. He demonstrates how the ‘bricking’ process works in the kitchen, Friday. (Cassandra Jenkins/The News)

“I’ve been here for about three or four weeks to get ready for the grand opening,” he said. “We had community night and we had city council, city managers and the mayor of Nederland come out. They loved it so much that the mayor came out the day after the meeting and asked how it went.

“We had a near record breaking sales week. We had the largest single grand opening day out of all our Texas locations that have been open to date.”

The restaurant is dine-in and takeaway, with delivery services on the way. They also serve beer, wine and dessert pizzas with gluten and vegetarian options.

Customers can call the restaurant ahead of time during busy hours and get their pizzas cooking before they arrive.

The restaurant is located at 2500 Nederland Ave. and is open from 11 a.m. to 10 p.m. Sunday-Thursday and 11 a.m. to 11 p.m. Friday and Saturday. To see the full menu visit brickovenpizzacompany.com.