EDITORIAL — Shooting of child should rattle us all 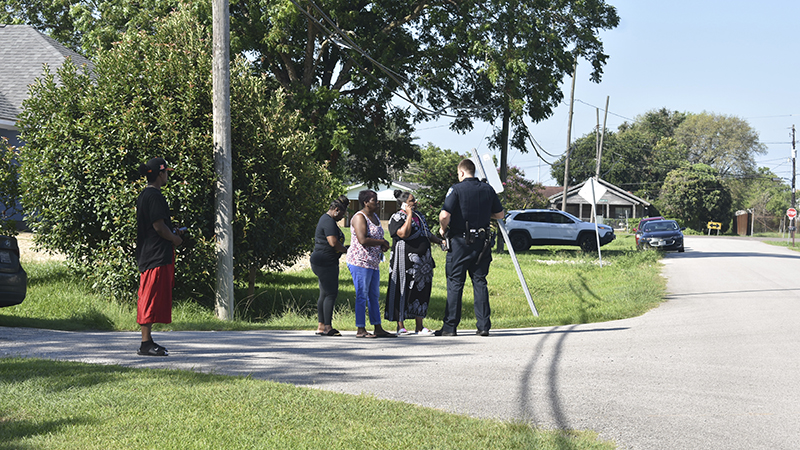 A Port Arthur police officer speaks with a group of people near the corner of 53rd Street and Grant Avenue on Wednesday. (Mary Meaux/The News)

Hours after the attention subsided Wednesday, family members, somber yet polite, went about the business of putting life back in order at 5627 Grant Ave.

That’s the home in the El Vista subdivision in Port Arthur where an unseasonably cool, early July morning calm was interrupted by gunshots. At least two bullets hit cars parked in front of the single-story, yellow wood-frame home. One shot apparently pierced the front of the home itself, striking a 4-year-old child in the back. A woman who identified herself as the child’s aunt said he was OK.

If police know why the home was targeted, they weren’t saying Wednesday. They spent the morning collecting abundant crime evidence at the scene. Neighbors on the dead-end street were at a loss to explain what had happened; as neighborhoods go, El Vista is typically quiet. No one could recollect such a crime happening before.

The single-family dwelling where the victims lived is part of what is now an uneven street. El Vista flooded during Hurricane and Tropical Storm Harvey almost two years ago. There’s been talk of buyouts. On Grant Avenue, past a tilted “Concerned Citizens Neighborhood Watch” sign, was a leg of the street with about a dozen homes. “We care,” the sign says. Perhaps one-third of the homes were vacant, apparent victims to flooding.

At Grant’s intersection with 53rd, a new home was essentially complete, save for landscaping. Behind the targeted home, horses stood idle in an open field. A neighbor around the corner leaned on his lawn mower. Those still-life images might have been painted anywhere in Port Arthur — but not Wednesday. Only one neighborhood was left to wonder why a child had been shot. That crime should rattle us all.

By outward appearances, life around El Vista was recapturing its normal as the sun hung high in the summer sky Wednesday. But that neighborhood won’t be normal for a long time.

How do you send your child out to play where there’s been a drive-by shooting? How do you grill supper outdoors at sundown, or walk carefree to the mailbox? In a neighborhood that was placid Tuesday night, neighbors watched approaching cars with more care Wednesday morning.

There is a culprit and we as a community need to find him. It’s not something amorphous or vague that’s at blame. It’s not poverty or social ills that’s at fault. When a person fires a gun into an occupied home, not knowing or caring who or what is on the other side, he carries a meanness that may never be fixed but must be stopped.

On Wednesday, a mother had to tell a child why he’d been shot. We can’t offer a single explanation.

“We care,” said the Neighborhood Watch sign. That should mean all of us.