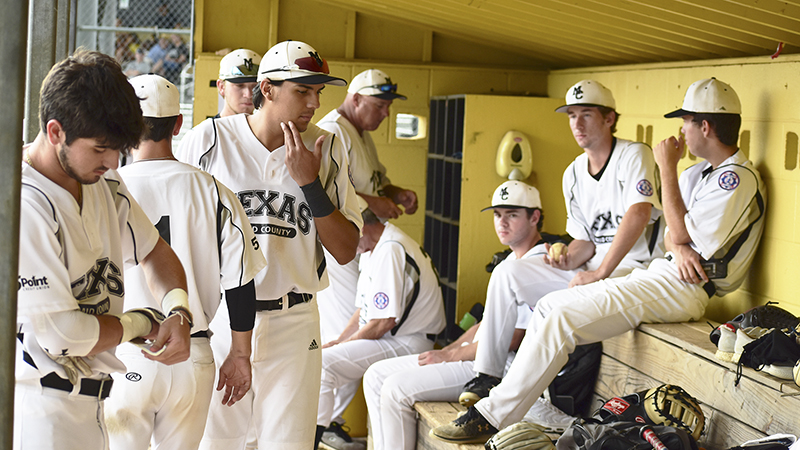 Mid-County baseball players wait in the dugout for the start of their July 14 Babe Ruth Southwest Regional title game against Del Rio at Metreyeon-Delahoussaye Field in Nederland. (I.C. Murrell/The News)

As Mid-County has basked in the glow of another Southwest Regional championship, other teams from across the United States have punched their tickets to Mobile, Alabama, and the Babe Ruth 16- to 18-year-old World Series.

Nine days have passed since Mid-County weathered the remnants of Tropical Storm Barry and played its title game against Del Rio on two fields. Once the World Series begins Aug. 2 at the University of Mobile, another day off will await a program that won it all two years ago in Ephrata, Washington.

“Basically, it’s the same way it was in 2017,” Ben Rogers said. “When we won it, we played two days, we were off a day, and we played two days again, and we had a bye. You always want to win your pool to get an extra day off [in bracket play]. The team we’ll play the second game, they’ll throw the No. 1 guy because they’ll be off the first day.”

Rogers is the Mid-County manager.

Mid-County (9-0) knows two of its four opponents in “National League” pool play. Onondaga, New York, will represent the Middle Atlantic and Bakersfield, California, has earned the berth out of the Pacific Southwest. As of Monday, the Ohio Valley and Pacific Northwest champions were yet to be determined.

Visiting teams will stay with host families throughout the tournament, an experience that Mid-County players took in two years ago and one that second baseman Adam Roccaforte is looking forward to most.

“We all have grown close together and that helped us to play together,” Roccaforte said. “We’ve been on a roll since we’ve gone undefeated in these last two tournaments.”

Mid-County played in the Perfect Game Owl Classic at Rice University to prepare for its regional. The team is scheduled to scrimmage an alumni team at 6 p.m. Wednesday at Nederland High School’s Metreyeon-Delahoussaye Field.

Rogers, who also managed the 2017 champions, notices stark differences between the two ballclubs.

“The 2017 team absolutely refused to get beat,” Rogers said, although the 2019 team is unbeaten. “This team doesn’t hit the team quite as well as the other team did, but there’s more pitching and team speed. These guys can run. A lot of them can bunt. Our speed will allow us to do a lot of things, like bunt-and-run and hit-and-run.

Speed happens to be a forte of Roccaforte, who ran on Nederland’s track team along with teammate Rene Cunningham.

“We get on a lot,” Roccaforte said. “Anytime we get on, we score. We’re a quick team, and we take advantage of a lot.”

“We have all different kinds of pitchers,” said Rogers, who’ll play next at Panola College. “We have guys who can finesse and guys who can throw hard. It’s something different about each one of us.”

Said Adam Roccaforte, who’s been offered a spot on Houston Baptist’s ballclub: “I think our pitching has been our strongest point. The most of our pitchers are committed. That helps a lot. Our defense is solid as well.”