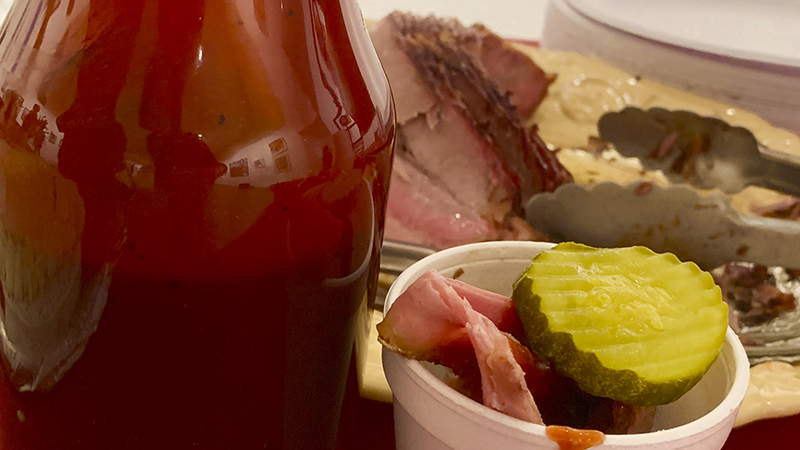 Sure a barbecue is "messy," but you can style it up with "saucing" from a cruet. (Darragh Doiron/Special to The News)

If you think cruets are for fine wine, give your summer barbecue a new look. I attended an art opening and a sweet and sticky sauce flowed from a cruet. It paired well with plastic forks and red checkered napkins.

I’ve encountered another sauce spectacular. You know those chocolate fountains? The sauce pouring out of a three-layered fountain in a low-lighting situation did befuddle some people who thought it was chocolate. It was actually barbecue sauce. This party was on the greater Graceland grounds, in the car museum.

The sauce cruet setting was this area’s own Beaumont Art League opening. It was a great chance to enjoy good company and pick up some local art.

Tea Time: Just because everyone at the table is obsessed with the boxes — how curtains or pajama pants or a desk set would look so exotic and like the owner was well traveled — doesn’t mean their focus should not be on the actual tea. The people at Wissotzky’s are focused on their flavorful teas with those something extras right down to the gauzy bags themselves. So who are these people?

Wissotzky Tea is an international, family-owned tea company based in Israel with offices in London and the United States. It is the leading tea distributor in Israel. Founded in 1849 in Moscow, Russia, it became the largest tea firm in the Russian Empire. That came from the press release, and since I’ve never had tea in Isreal, I believe it. International foods are a big hit and they think Americans are ready for these new flavors: salted caramel chai; ginger and turmeric; spiced nana mint; and pumpkin spiced chai.

My guest was a man who indulges in tea daily and he couldn’t wait to get into these samplings. Merchants describe their chai as “a blend of aromatic herbs, spices and black tea that can be enjoyed, as Indian custom dictates, sweetened with milk or iced for a uniquely refreshing experience.”

I go for straight up without milk to enjoy a treat without those added calories. I’m doing iced in the summer but that pumpkin may be saved for the occasional Texas cool front. Come on and up that tea game.

Like all Wissotzky products, the artisan spiced tea collection is kosher and non-GMO. It is available in packs of 6 per case (MSRP $4.99 per 16-serving box).

Lavish Leathers: It’s just because, since you’ve got to look good shopping for, assembling and serving all these goodies, that Lavish Leathers designs quality and stylish baubles. Their tagline is “Uniquely Beautiful, Uniquely You, Uniquely Lavish. The company found me when they were promoting little strips and shapes of leather incorporated into earrings and necklaces as stocking stuffers. Half a year later, I’m telling you my royal blue leather tassel necklace is getting noticed. This leather is lavish in look, feel and even fragrance. It’s rich. There’s a squared off purplish prism attached that I can’t help peeking through to see multiple everything in a bug-eyed way. That’s all natural charm for the lavish life.

Darragh Doiron is a Port Arthur area foodie who would try barbecue sauce from just about any serving vessel. She would love to hear from readers at darraghcastillo@icloud.com