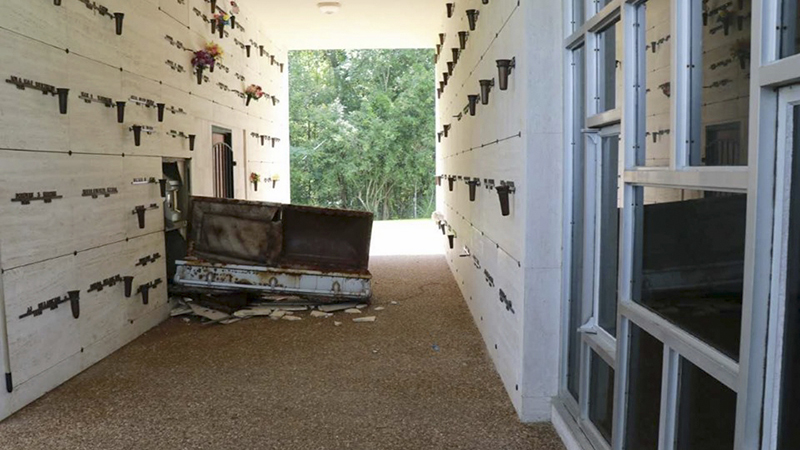 Beaumont police are seeking clues in a case where two mausoleum tombs were damaged and a casket removed at Forest Lawn Memorial Park earlier this month. (Courtesy of the Beaumont Police Department)

Beaumont police are seeking tips to help identify who damaged two mausoleum tombs, taking a casket out and opening it.

A photo of the mausoleum showing the two damaged tombs and what looks to be an old casket with rust was posted to social media by BPD with the hope the photo may lead to tips.

Grave robbing could be a motive but cannot be determined with certainty until a suspect is found.

“That is an aspect they will investigate,” Morrow said. “We are not sure of the motive at this point.”

Police did not give details on the condition of the body in the casket and whether it had been tampered with.

Morrow said the Jefferson County District Attorney’s Office might consider charges including felony criminal mischief, abuse of a corpse or theft of a gravesite.

“It depends on which charge fits the crime,” she said. “We are not sure what, if anything, was taken so we are pleading with the public if anyone has information, or saw something on social media or someone, to call.”