Texas Art Museum to open soon; still much work to do 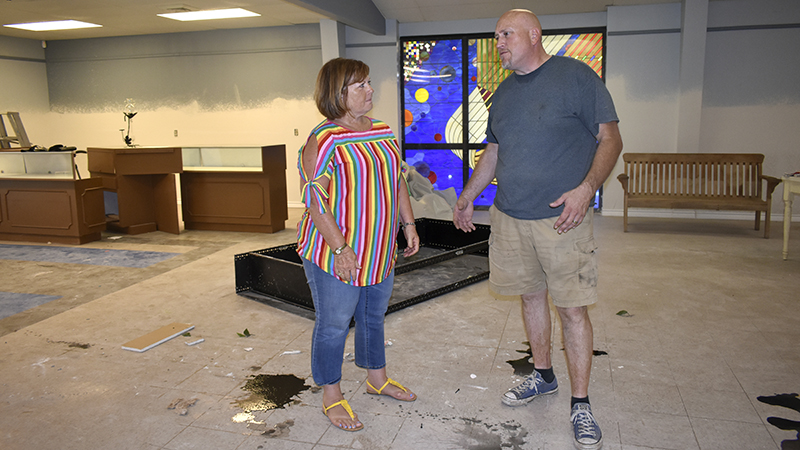 Texas Artists Museum Treasurer Pam Trosclair, left, and president Mark Nesmith, discuss the museum’s future as they prepare for reopening in the coming weeks on Friday. The museum has been closed since Hurricane Harvey. (Mary Meaux/The News)

Texas Artists Museum is getting ready to reopen for the first time since Hurricane Harvey.

Board members and volunteers have been working feverishly, especially of late, to prepare for an event scheduled for the end of the month. After that, they are looking at a proper reopening and new beginning in September for the museum located at 3501 Cultural Center Drive.

TAM Board President Mark Nesmith and Pam Trosclair, board treasurer, were among several people cleaning and working at the museum last week making it ready for the public.

Hurricane Harvey left the museum with about 4 feet of water inside in late August 2017, and the building sat empty for about a year. As a non-profit art gallery, there wasn’t a lot of funding to do what was needed — many residents were dealing with their own losses and most members of the museum board are of an older population.

“It has taken so long because we are a small group of people,” Nesmith said, adding there wasn’t a lot of community help.

And while the building has been gutted and new sheetrock installed, there is still painting to be done, floors to clean and tables and chairs to get. Later, Trosclair said, the ceiling and lights will be replaced, but that is a year or two down the road.

The museum also needs help with the restoration of paintings, framing and matting of artwork. Nesmith and Trosclair walked to a closet in the back of the museum where framed paintings were stacked. Many of the frames appeared dusty or moldy and some items had water damage, including one that was signed by famed Port Arthur artist Robert Rauschenberg.

Along the way TAM has received some financial assistance through grants from the Service League of Port Arthur, Foundation of Southeast Texas, Texas Commission on the Arts and Sue Bard with the Southeast Texas Arts Council helped TAM receive one of their largest grants. 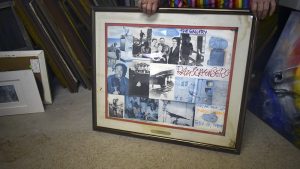 Once the museum is open, Nesmith and Trosclair hope to have a membership drive, and changes are in the future.

Previously the museum was a concept museum with displays and rotating shows, and Nesmith wants to bring back ArtSmart and possibly make the event more than just a summertime camp by having a session during the Christmas break.

They also plan to bring the energy back to TAM.

“Start small, get teachers involved,” he said. “I’m a teacher in Port Neches and another board member is a teacher in Groves.”

Port Arthur students will be the first tapped to become involved with TAM, she said.

And there are some already waiting to come back.

“The Nederland Art Guild and Port Arthur Art Association have contacted us and want to come back,” she said.

Anyone wishing to help with framing and matting or seeking more information, contact TAM at texasartistsmuseum@gmail, art@marknesmith.com or through their Facebook page.