Andrew Landry, originally of Groves, walks off the second tee during the final round of the John Deere Classic golf tournament on July 14, 2019, at TPC Deere Run in Silvis, Ill. (Charlie Neibergall/AP)

Question No. 1 for me Sunday, after watching Port Neches-Groves exes Andrew Landry and Chris Stroud make Southeast Texas golf fans in general and Pea Patch alums in particular extremely proud, was whether two players from the same high school had ever finished top four in the same PGA Tour event. 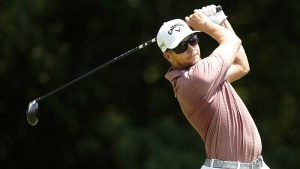 Chris Stroud hits off the second tee during the final round of the John Deere Classic golf tournament Sunday at TPC Deere Run in Silvis, Illinois. (Charlie Neibergall/AP) 7-14-19

It has probably happened but maybe not. After all, it’s fairly unique for two players from the same high school to even be on the tour at the same time. Factor in both of them playing well enough in the same week to finish top four, and you’ve got pretty long odds.

The most likely possibility would come from among the Milton, Florida, trio of Bubba Watson, Boo Weekley and Heath Slocum. The elite Baylor School in Chattanooga, Tennessee, had four players — Luke List, Harris English, Stephen Jaeger and Keith Mitchell — on tour at the same time, so perhaps they have done it.

We’ll know sooner or later because I have a contact at Golf Channel researching it.

Meanwhile, there is no question Sunday was a feel-good day for those of us who have watched Stroud and Landry come up through the junior golf ranks, be stars in college and eventually win on the PGA Tour. The success both of them have had belie the background of growing up on a ragged nine-hole course.

What made their performances in the John Deere so compelling, so special, was how much both have struggled this season.

Stroud, in particular, has gone through an extremely taxing patch and was in grave danger of losing his playing card at age 37. Landry still has a year guaranteed based on his Valero Texas Open win in 2018, but he’d played poorly until recently. He was way on the outside looking in as far as the FedEx playoffs were concerned.

Their differing reactions, after both sank clutch 10 footers on the 72nd hole Sunday, underscored how this season has worn on them.

Stroud’s reaction, after tying for fourth on rounds of 68-66-66-67 to move to 95th in FedEx points, was one of a massive exhale. It was easy to tell a burden had been removed. Landry, outright third on scores of 65-65-67-69, voiced disappointment at not winning, but was upbeat to have gotten his game back on track.

“This was a huge day for me,” said Stroud. “Through all the troubles with injury, depression, frustration with equipment and some personal issues, it has been a really tough year. I have been trying to find a way to love golf again, to motivate myself. At times, I just wanted to walk away.

“I have never missed so many cuts. It saps your confidence. I am just so proud of how hard I fought, how I never gave up out there today, how I came back from that double bogey on 11 with four birdies. All day, I knew what was on the line for me. I made such a great par on 18 to basically lock up my card. You just can’t imagine the relief.”

Stroud’s reward to himself is taking the week off. He’s going to rest and regroup, then try to improve his playoff position in the final two regular season stops — The Barracuda Championship in Reno, Nevada, and the Wyndham Championship in Greensboro, North Carolina.

Landry, who moved from 171st to 121st in FedEx points, will also take the week off, then play the final two tournaments. He may be back outside the top 125 after this week, but is confident with where his game is, loves the courses in Reno and Greensboro and expects to play well.

He also indicated he won’t be losing any sleep over not hoisting the John Deere trophy.

“For sure, I’m disappointed at not winning,” he said. “It was just one of those golf deals where I didn’t get the breaks I needed on Sunday and I didn’t play well enough. Actually, for the most part, I thought I was pretty solid. But Dylan Frittelli) played better. I’m happy for him. We both work with Chuck Cook in Austin. I really like him.”

Landry pointed to the obvious difference in his game — improved putting — from when he was missing cuts or managing to work in one bad round per tournament.

But he said it went beyond that to the fact that for a long stretch of the season golf had become drudgery. He wasn’t looking forward to playing.

“When I left for the Travelers a few weeks ago, I vowed that I was going to start enjoying the game again,” he said. “I had to quit treating it like a job. And I’ve been able to do that. It certainly helped when I started putting better.

“My ball striking is the best it’s been in four years. I hit so many good shots this week, plus I love the golf course. I told my wife early in the week that this is a place where I am going to win a tournament some day. And it almost happened this week. I am definitely going to win here at some point.”

Both Stroud and Landry used the same word to describe their feelings over a couple of PNG Indians, a couple of kids who didn’t travel the silver-spoon path to the PGA Tour, finishing top four in the same event.

Both also agreed that some other duo probably has probably already done it.

“Really cool,” said Stroud. “It just shows two gritty players who grew up on a cow pasture and learned to play golf in a simple way, can do good things in this game. We had already proven that, but this is pretty special. Andrew didn’t need it as bad as I did this week, but he’s had his struggles too. I’m happy for him.”

“As far as us being the first guys to finish top four, I would bet against it. I would bet on Bubba Watson and the guys from his town. But I would bet it has not happened often.”

“It was so cool,” said Landry. “It was nice to see both of our names high on the leaderboard. I’m sure there was a lot of excitement back home. Chris had been really struggling. I’m happy for him that he was able to secure his card. But I doubt there is much chance we are the first two guys from the same school to finish top four.”

That said, there is one other question requiring an answer. Why did CBS announcers, especially Lamar grad Bill Macatee, virtually ignore such a unique
hometown story line on Landry and Stroud? Based on what I’ve heard, a lot of folks are stewing about it.

All I can say for sure is that if Jim Nantz had been there, it would not have happened.

Landry and Stroud were not the only golfers with Southeast Texas ties to finish top four in a professional golf event this past week.

In the Super Saturday Senior 2 ball Game at Babe Zaharias, the team of Ed Holley, Gary Fontenot, Wes MacDonald and Buddy Hicks won the front with minus-5. On the back, the foursome of Ronnie LaSalle, Bim Morrow, Larry Johnson and Hicks placed first with minus-2. …

The Friday Senior 2-ball at Zaharias saw the team of Bob Byerly, Bim Morrow, Dwayne Morvant and Ted Freeman take the front with minus-2 and tie the back in minus-2. Also minus-2 on the back was the team of Gary Hanan, Gary Fontenot, Charlie Leard and Larry Foster. …

Wednesday’s Zaharias DogFight was won with 16 points by the foursome of Cricket Owen, Kacee Begaman, Steve Wisenbaker and Jerry Watson. Tying for second with 14 points were teams captained by Ed Holley and Joe Gongora.

BOB WEST ON GOLF — Southeast Texans have made mark in PGA Championship.