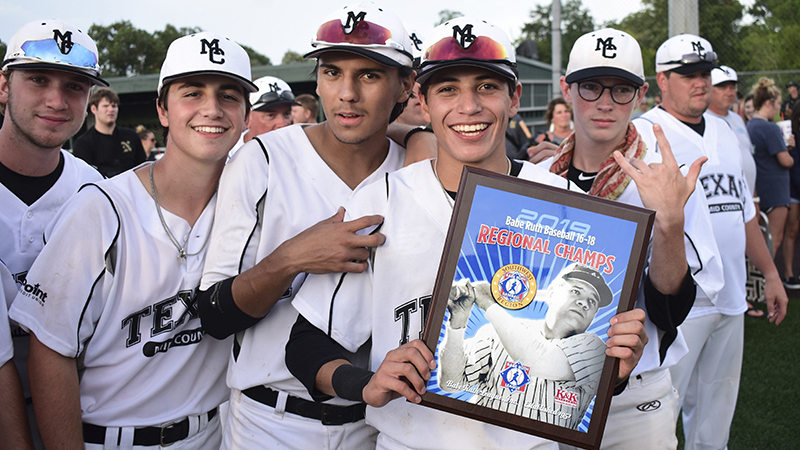 Mid-County players celebrate with the Babe Ruth 16- to 18-year-old Southwest Regional championship plaque after defeating Del Rio 7-1 on July 14, 2019, at PNG. The game started in Nederland but was moved in the third inning due to inclement weather. (I.C. Murrell/The News)

PORT NECHES — Peyton Miller bookended Mid-County’s championship run in the Babe Ruth 16- to 18-year-old Southwest Regional with pitching victories, even if it meant playing in two different locations in the same game.

“I had a few rough innings, but that’s all right,” the recent Kelly Catholic graduate said. “It comes together in the end.”

After a 2-hour, 14-minute break in the action to change fields from soggy Metreyeon-Delahoussaye Field at Nederland High School to the artificial turf at Port Neches-Groves High School, not even heavy (on- and off-again) rainfall from the edges of Tropical Storm Barry could chase Miller off the mound.

He worked six innings and held Del Rio to a run on four hits in a 7-1 victory, sending the Nederland-based team to its second Babe Ruth World Series in three years. 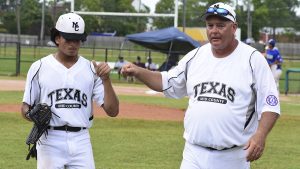 Mid-County will begin its World Series run Aug. 2 and compete in pool play through Aug. 6. Bracket play is Aug. 7-9. The University of Mobile (Alabama) is the host site for the tournament.

Miller did not get to compete last year, when Mobile’s Alabama Rawdogs beat Mid-County in the Southwest Regional final and went on to win the World Series.

Why didn’t Miller play last year? “I was on a cruise,” he said.

Mid-County (9-0) cruised to a 14-0 win against Ascension Parish, Louisiana, the last time Miller hurled before Sunday, but not every game has been a cake walk. The hosts pulled away late against Petal, Mississippi, later that Friday and was held to a single hit in defeating Northwest Arkansas the next day.

Mid-County led Del Rio 6-0 through four innings, scratching three in the fourth. The black and white finished the game with five hits.

Yet, leadoff man Landon Hiltz hopes his team will work more on offense between now and the trip to the Alabama coast.

“We’ve got to work on hitting the ball better,” said the new Nederland graduate, who drew eight walks in the tournament.

Manager Ben Rogers said he couldn’t be happier with his pitching staff, including Noah Gregory (13 strikeouts against Northwest Arkansas) and Grant Rogers (seven strikeouts in six innings against Petal).

“It’s really hard to keep everybody in a ballgame when you’ve got a rainout over there and you’ve got to move, and then you’re delayed because it rained here,” Rorgers said. “Everybody did a good job. They knew their roles, and everybody came to play.”

The change in venue — which came only after a 21-minute delay interrupted the start of the third inning in Nederland — was reminiscent of PNG’s scramble to find a field that could withstand storms during a 2016 playoff series.