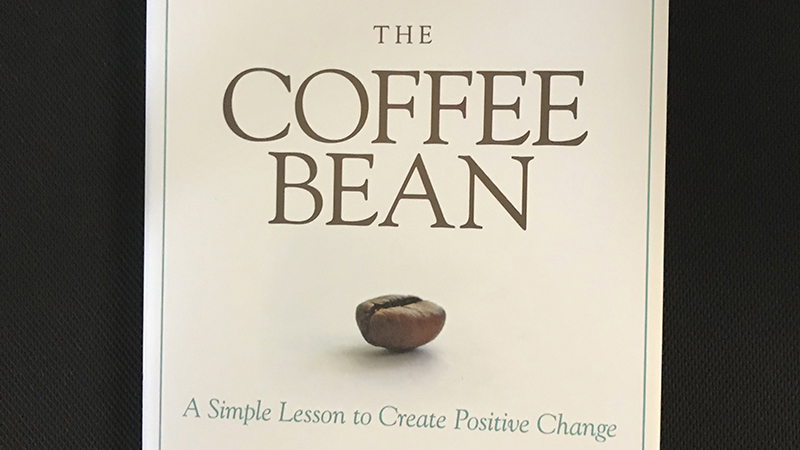 “The Coffee Bean: A Simple Lesson to Create Positive Change” by Jon Gordon and Damon West

Damon West handled Friday’s big news like he handles most of his plaudits and personal triumphs of late.

“Isn’t it crazy?” he said, shortly after learning “The Coffee Bean,” the short volume he co-authored with motivational speaker Jon Gordon, had reached No. 2 on the Wall Street Journal’s best seller list.

The Wall Street Journal ranking was revealed Friday; there the book sits, two places ahead of a Dave Ramsey/Thomas Nelson title.

“The Coffee Bean” was written because Clemson football coach Dabo Swinney tipped off West’s co-author, nationally recognized motivational speaker Gordon, about West’s appearance before Swinney’s team. You ought to contact this guy, Swinney told Gordon, who took the coach’s advice.

The result was the slender volume that delivers a succinct but big message — applicable to anyone — that can change their lives for the better.

“Jon is a very successful motivational speaker and author who has sold millions of books,” West said. “It shocked me that he knew who I was.”

West, the former Thomas Jefferson High and North Texas quarterback whose life unraveled due to addiction and poor choices, caught a life-changing break before entering the prison system with a life sentence.

A fellow prisoner — West knows him only as “Mr. Jackson” — told him the story of the coffee bean as a way to gain control of his own life in prison.

Consider three items, he said: an egg, a carrot and a coffee bean. What happens when you drop them individually into a pot of boiling water? The egg turns hard, as some people do in the prison system. The carrot turns soft, another wholly unsatisfactory outcome for prisoners.

But the coffee bean, dropped in the maelstrom of boiling water, just like West would be dropped into prison life, changes its environment for the better and makes coffee — something useful and soothing.

The story itself wasn’t original to Jackson. In fact, West and Gordon have learned, it has been taught in various ways. But no one had written about it, as these co-authors did.

“When he heard the story I had told the team, he knew it was a story that needed to be told,” West said. “It’s important to note neither of us came up with this story. I’ve seen hundreds of variations of the story.”

But the message as delivered in the best-selling book is the version that changed his life, redirected him on his life path.

West said the book is appealing to a mass audience, and the message is being grasped by everyone from elementary school students to corporate executives. It’s appropriate, he said, for any team or organization or school.

He’s taking the message to civic group meetings, on radio broadcasts, on national television shows, including The 700 Club and EWTN. In August, he said, he’ll be speaking to football programs again.

In both books and in his personal appearances, West is unsparing to himself about the downturn that took him to prison — a frenetic life of crime, mostly in Dallas, that ended with a 65-year prison sentence. Now, he speaks to prisoners in the same prison system where he was a prisoner. Now, he’s seen as the change agent — the “coffee bean.”

“Blame, excuses, none of that is my currency anymore,” he said in a telephone interview Friday. “Excuses don’t do you any good. The thing I had to change was myself.”

Now, he said, he’s reconnected to the things his own loving parents taught him in a Christian home. Now — he was recently married — he’s embraced his own family, his faith and a mission to be a force for good.

Part of that mission might involve a third book, which he has discussed with his agent.

“I talked with my agent (Thursday),” he said. “Because of being tagged as ‘best-selling author,’ I have a new book in the works.”

He said he’s grateful to people who’ve supported his recovery, his message and to those who have bought his books. Without them, he said, there is “no Damon West story.”

Mostly, he said, he’s thankful to God, the same God his mother Genie taught him about as a child, the God to whom he turned in prison and the God who guides him today through recovery and redemption. The eternal “change agent.”