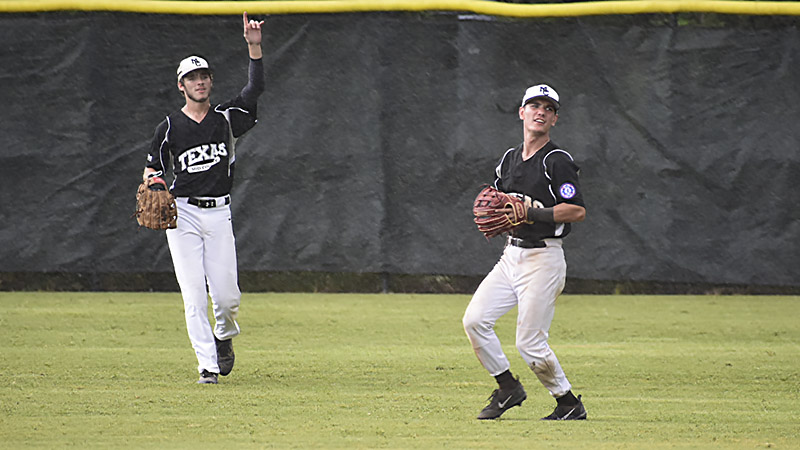 Kamden Grant, left, of Mid-County signals one out after Landon Hiltz makes a catch in the brief rain against Northwest Arkansas on Saturday afternoon in Nederland. (I.C. Murrell/The News) 7-13-19

NEDERLAND — Mid-County has won each of its three games in the Babe Ruth 16- to 18-year-old Southwest Regional in three different fashions.

The host team jumped to a 9-0 lead after two innings and run-ruled Ascension Parish, Louisiana, in the opening round game Friday. That evening, the Nederland-based team padded a 4-3 lead with eight runs in the seventh against Petal, Mississippi.

Saturday afternoon, Mid-County was held to a single hit, but it still pushed across a run when it needed to most to back up Noah Gregory’s 13-strikeout pitching gem.

A passed ball with two outs in the sixth inning allowed Omar Mascorro to plate the game-winning run in a 2-1 victory over Northwest Arkansas on Saturday afternoon, placing Mid-County in the championship round against either NWA or the winner of Saturday evening’s Del Rio-Petal game.

The losers’ bracket final has been rescheduled for 11 a.m. Sunday, with the championship final to start at 1:30 p.m., due to the threat of severe weather in the area. If a second championship game is necessary, the start time will be determined then.

Gregory threw 99 pitches with 64 of them strikes. He held Fayetteville-based Northwest Arkansas to one run on three hits.

Mid-County (8-0) tied the game at 1-1 in the fourth inning. The bases were loaded when Austin Schaper walked and Kamden Grant was hit by a pitch to advance Justin Smith to third. Mason Brown then took a hit from a pitch to send Smith home.

Fortune struck Mid-County again in the sixth when Omar Mascorro scored from third base on a wild pitch with two outs.

Northwest Arkansas had found two-out favor in the top of the second thanks to a wild pitch that allowed a run. Grant lined Mid-County’s lone hit in the bottom of that inning, a two-out double, but Brown flew out to end the scoring chance.