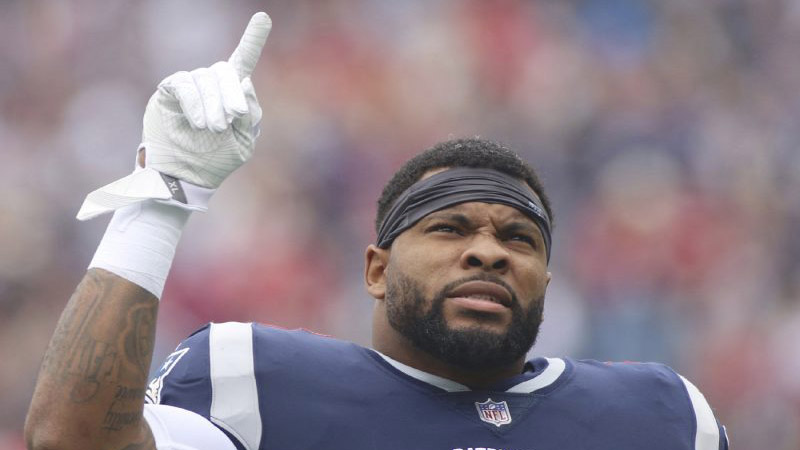 RICHMOND — A Texas sheriff said Friday he has apologized to New England Patriots player Elandon Roberts for the actions of a deputy who referred to the linebacker’s race and size during a March traffic stop but also defended the deputy’s comment and the stop.

Fort Bend County Sheriff Troy Nehls said during a news conference that he spoke with Roberts, a Port Arthur native and 2012 Memorial High School graduate, and his attorney and said the deputy should not have taken so long with the March 10 traffic stop.

Roberts was stopped as he pulled into the driveway of his Houston-area home and Nehls also said Deputy Adam Watkins was wrong to order Roberts’ wife back inside the home when she saw flashing lights and stepped outside.

“The way he interacted with his wife, I didn’t appreciate the tone,” Nehls said of his deputy.

Watkins, who is white, ultimately was issued a verbal reprimand for how he conducted the stop, according to sheriff’s Capt. Steve Holtz.

But the stop, which was captured on dash-cam video , was warranted because Roberts was traveling 59 mph in a 35 mph zone as he traveled home, Nehls said. Holtz explained the ticket later was changed to a warning at the deputy’s request.

Watkins, in speaking to a colleague, referred to Roberts as a “big, black male” but Nehls defended the reference to race, saying the deputy was simply offering a description of the driver. The sheriff didn’t comment on why it was necessary for the deputy to invoke Roberts’ race.

Roberts, 25, in a statement to USA Today was critical of his treatment, saying, “Unfortunately, these types of things are happening all too often to African Americans.”

Watkins also told a colleague that Roberts “wouldn’t comply” when told to get back into his car after getting out once he pulled into his driveway. “I had to yell at him pretty hard,” Watkins is heard saying on the video.

Holtz said Watkins, a rookie only on the job a few months when the stop occurred, became nervous when he saw Roberts initially get out of his car. He said the mistakes Watkins committed were understandable in light of his inexperience.

Nehls criticized USA Today for publishing an edited version of the stop that he believes was misleading. The sheriff also criticized those who turn the encounter “into a racial issue.”

“I think there have been traffic stops and interactions between white and black that have caused some of the most horrible, civil unrest in this country,” Nehls said, adding that, “We haven’t experienced that in Fort Bend County.”

The fast-growing county is just southwest of Houston. Roberts, who lives in Richmond, starred at the University of Houston before being drafted by the Patriots in the sixth round of the 2016 NFL draft.

The sheriff’s apology comes a day before Roberts is to host his third annual heart walk starting at the Memorial campus starting at 8 a.m. A football camp featuring fellow Port Arthur native and Canadian Football League Hall of Famer Don Narcisse will follow at 10 a.m.

The News contributed to this article.