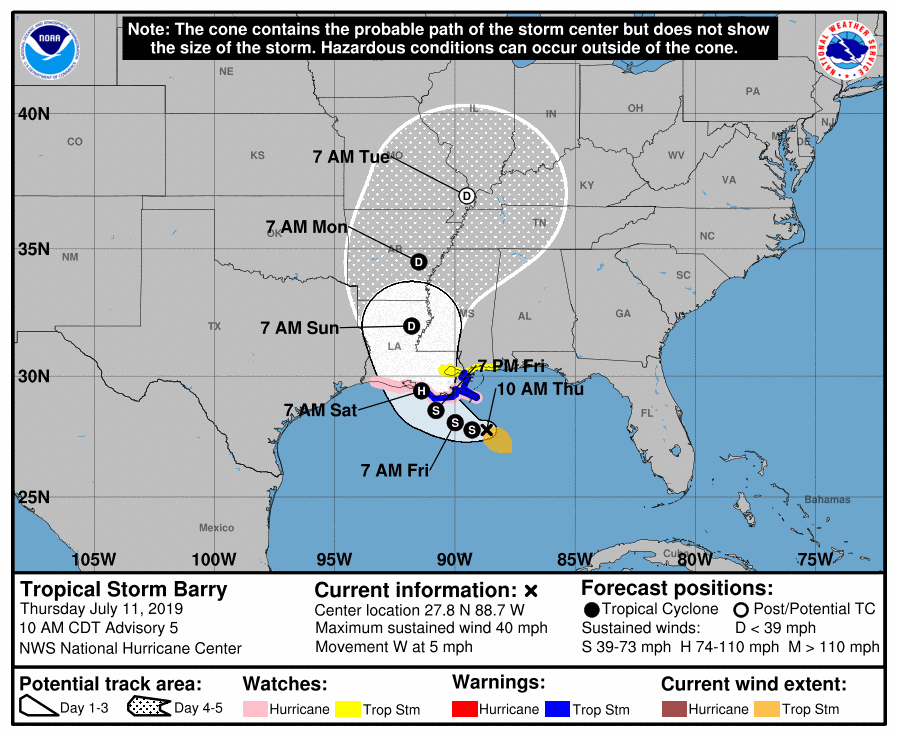 A Tropical Storm Warning is now in effect for the Louisiana coast from the Mouth of the Pearl River to Morgan City.

A Tropical Storm Watch is now in effect for the Mississippi coast east of the Mouth of the Pearl River to the Mississippi/Alabama border .and for Lake Pontchartrain and Lake Maurepas, including metropolitan New Orleans.

Additional watches and warnings may be required for portions of the northern Gulf coast later today or tonight.

At 10 a.m., the center of Tropical Storm Barry was located near latitude 27.8 North, longitude 88.7 West. Barry is moving toward the west near 5 mph and this motion is expected to continue today.

On the forecast track, the center of Barry will be near the central or southeastern coast of Louisiana Friday night or Saturday.

The HWRF and HMON forecast Barry to move almost due north from its current position with a landfall in Mississippi, while the UKMET takes the cyclone to the upper Texas coast. The GFS, ECMWF and Canadian models lie between these extremes. Overall, there has been a slight eastward shift of the guidance envelope, so the new forecast track is also adjusted slightly to the east. It should be noted, though, that the new track is west of the consensus models.

Reports from Air Force Reserve and NOAA Hurricane Hunter aircraft indicate that maximum sustained winds have increased to near 40 mph with higher gusts. Additional strengthening is expected during the next day or two, and Barry could become a hurricane late Friday or early Saturday.

Tropical-storm-force winds extend outward up to 90 miles mainly to the southeast of the center.

Barry is expected to produce total rain accumulations of 10 to 15 inches near and inland of the central Gulf Coast through early next week, with isolated maximum rainfall amounts of 20 inches across portions of eastern Louisiana and southern Mississippi.