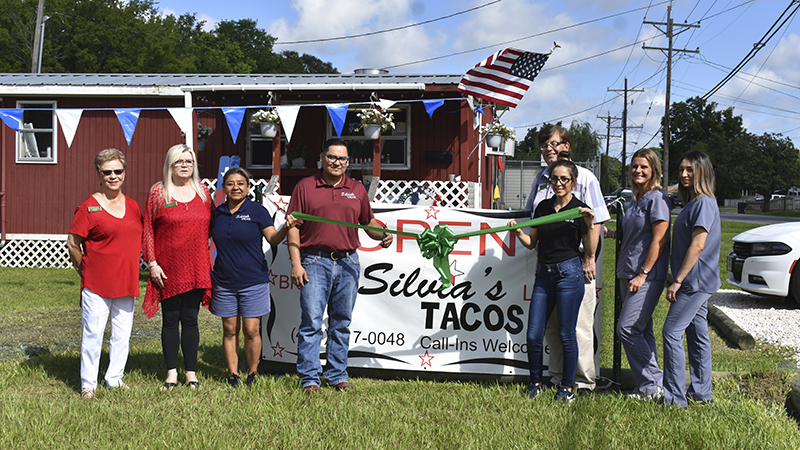 The Lerma family, friends and the Groves Chamber of Commerce pose for a photo outside Silvia’s Tacos as they celebrate their ribbon cutting Tuesday. The business is at 3303 Taft Ave. in Groves and is open 5 a.m. to 2 p.m. Monday through Friday. (Mary Meaux/The News)

GROVES — Janett Lerma held out the freshly made fajita taco, filled with meat, topped with grilled onions and green sauce during a ribbon-cutting ceremony for the recently opened Silvia’s Tacos on Tuesday.

The taco, made with a homemade tortilla, led to some excited chatter among members of the Groves Chamber of Commerce who were there to officially welcome the business.

Miguel Lerma tried to open the business, which is located at 3303 Taft Ave. in Groves, last year but things didn’t work out for him then. One reason was his job at the time, which sent him out of state. But now, with wife Janett and his mom Silvia Lerma, the eatery is up and running and busy.

Miguel Lerma is originally from Mexico — “three hours from Eagle Pass,” and was raised in Uvalde, Texas. He’s one of four children his widowed mom raised alone.

“There were times when things were tough,” Lerma told chamber members and others who had gathered at the taco stand.

Homemade chorizo is one of the things his mom made and still does. Lerma and the chamber’s executive director Ronnie Boneau stood together before the ribbon was cut with Boneau praising the food he picked up from there for lunch one day. Boneau said he was pleasantly surprised to see brisket in his taco but Lerma has known how popular brisket is in Texas.

“A lot of deer hunters go to Uvalde because they have access to different breeds of deer and the hunters want brisket,” he said.

The chamber members and Boneau said they are happy to have Silvia’s Tacos in the city.

“We’re thrilled to death they came to Groves,” Boneau said. “I came here a few months ago for lunch and was impressed.”

Silvia’s Tacos is open from 5 a.m.to 2 p.m. Monday through Friday and call-ins are welcome.