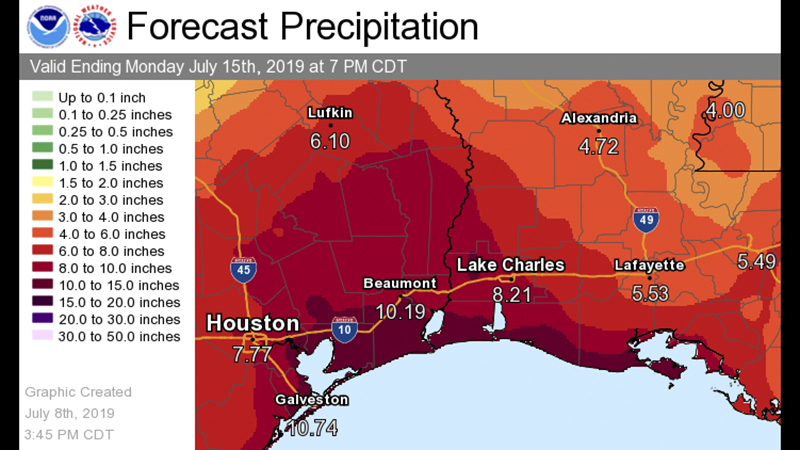 This graphic shows an early prediction for possible rainfall due to an oncoming storm system from the Gulf of Mexico, set to make landfall this weekend. (National Weather Service in Lake Charles, Louisiana)

A tropical storm development could impact the Southeast Texas coast this week, but the National Weather Service says forecasters won’t know more for certain until the storm moves into the Gulf of Mexico at midweek.

A low-pressure area over Georgia on Monday was moving south toward the northeastern portion of the Gulf by Wednesday, according to the National Hurricane Center, which foresees a greater than 80 percent chance for tropical development.

The NHC said that system may move west across the Gulf of Mexico, making landfall this weekend, somewhere near the southeast Texas or southwest Louisiana coast. It may rise to be as strong as a category 1 hurricane.

“Environmental and ocean conditions are forecast to be conducive for development and a tropical depression is likely to form by the end of the week, while the low moves slowly westward over northern Gulf of Mexico,” the NHC said.

“I would not say it is a very high-chance scenario yet,” Roger Erickson, warning coordination meteorologist for the National Weather Service in Lake Charles, Louisiana, said Monday.

The suggestion is that the storm would move west, he said. But until the storm gets over the Gulf, it’s uncertain where it would turn.

He said that Sunday, the suggestion was that the storm would move from Mobile to New Orleans.

The low-pressure system suggests a potential for heavy rain — up to 10 inches, the NHC says — coastal flooding and high winds.

Erickson said for now, coastal residents should keep their gas tanks full and have food and water available — the things that all residents should do during hurricane season, which lasts from June 1 to Nov. 30.

He said the likelihood is forecasters will have a better chance of predicting the storm’s course between Wednesday and Thursday.