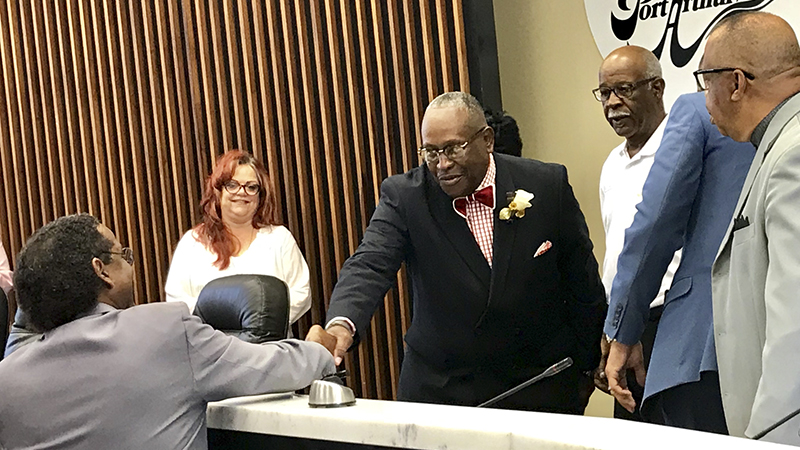 Mayor Thurman Bartie won election in a June 22 runoff with strong showings in precincts along Gulfway Drive area neighborhoods, in West Port Arthur and in Port Acres, according to results released by the City Secretary’s Office.

Incumbent Derrick Freeman showed most of his polling strength in northern Port Arthur and in precincts closest to the Port Arthur Public Library.

In downtown Port Arthur, especially in neighborhoods that Freeman and city staff tried hard to develop, the voters instead turned to Bartie in the runoff.

Precinct results were released following the City Council’s formal acceptance of the vote, the canvass that was completed Wednesday before Bartie was sworn in to office.

Bartie carried 54 percent of the runoff vote to win election.

Results reveal that in voting areas like Precinct 33 along West Port Arthur Road in Port Acres, support for Bartie was overwhelming. There, for example, Bartie took 209 votes to Freeman’s 72.

Mayor candidate Chuck Vincent of Port Acres said he threw his support to Bartie in an effort to oust Freeman from office, and said Port Acres’ showing was just the start for voters who are “fed up with the city of Port Arthur.”

“I expected to see more people,” Vincent said Friday. “A lot of people didn’t want to vote for either one of them.”

But he said a lot of his voters — Vincent ran third, out of the runoff, in the May 4 General Election — “stood behind me” and voted for Bartie.

Vincent said Port Acres people want more service and production from City Hall, citing “lazy employees that won’t do anything.” He said he was exasperated Friday because work crews were filling potholes on Port Acres streets but supervisors were not “anywhere to be found.”

If Bartie doesn’t get more production from the permanent city staff, Vincent said, Port Acres people would continue to push for political change.

Former Councilmember Willie “Bae” Lewis, who ran fourth in the May 4 General Election, said he supported Bartie through use of a “robocall” that called into question the incument’s character.

“Thurman had trouble getting across-the-board support,” Lewis said. “I got with him on my platform. That’s why I went ahead and endorsed him.”

Among Lewis’ “wants” from the new mayor: He wants the City Council to appoint former Public Works Director Hani Tohme as city manager. He said Tohme, by the City Council’s ground rules, should have been chosen in March to replace former interim City Manager Harvey Robinson. However, the councilmembers could not agree and elevated Assistant City Manager Rebecca Underhill as Robinson’s replacement.

“That’s the proper city manager,” Lewis said of Tohme. “It’s only fair to give the man his job.”

Lewis, who said he would run for the District 1 council seat next year, blamed District 2 Councilmember Cal Jones for reversing his position and not voting to appoint Tohme.

Lewis said his conversations with Bartie suggested to him that the new mayor would support hiring Tohme as the permanent city manager.

But if Bartie made such an agreement with Lewis, it wasn’t reflected in his initial remarks as mayor. On Wednesday, after he was sworn in, the new mayor made brief comments, saying he would meet with sitting councilmembers and city staff members to determine his first steps as mayor, which will be part of what he called the “Bartie 100-day plan.”