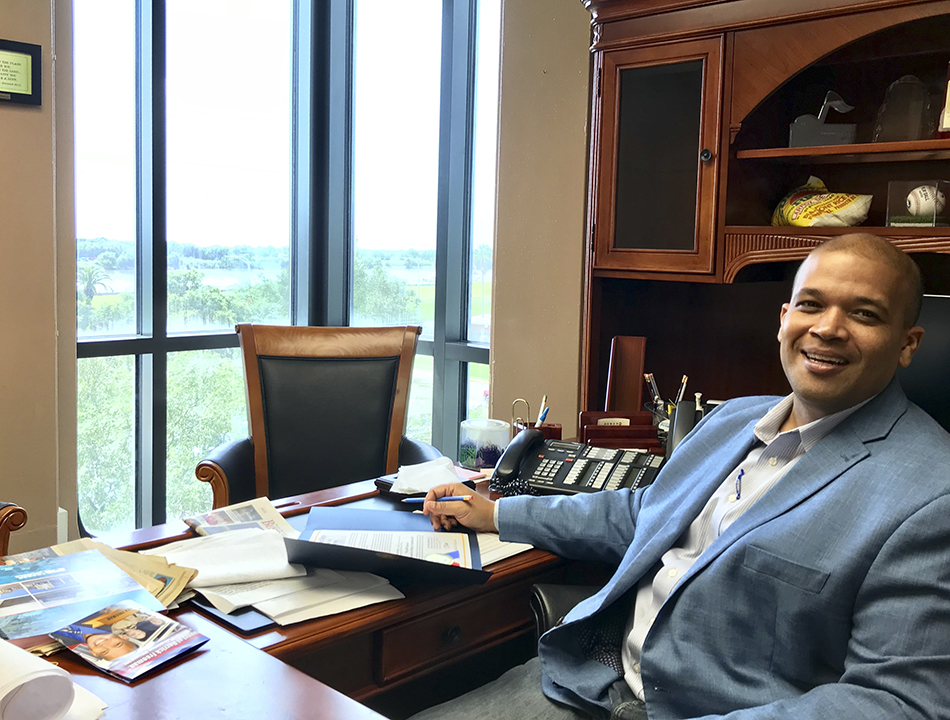 Port Arthur Mayor Derek Freeman has a post-election plan and it doesn’t involve politics. Not for awhile.

“I’m going to be thankful to getting back to riding bikes with my kids, playing catch and going back to making money,” said Freeman, a full-time realtor and part-time mayor who lost the June 22 runoff election to Thurman Bartie. “I’m looking forward to spoiling my wife.”

Freeman, 43, has served first as a councilmember and later as mayor since 2011. He said Port Arthur politics “can be brutal” and he and his family have weathered three election runoffs during that eight-year stretch.

He said he’s taking bowing out of politics, at least for now, gracefully.

“I’m going to take the next exit ramp,” he said, to figure out what’s next.

He said politics can be particularly taxing on families.

“There are a lot of sacrifices families go through,” he said. “For my children, it’s all they have ever known.”

He said time spent on city business meant time spent away from family — missed opportunities to coach his children in sports or to just play catch in the yard. He said he’s got to make up for lost time. In that sense, he said, the runoff loss is “liberating” for him and his family.

He said his own “Pops” coached T-ball, flag football and baseball teams when he was growing up. “I attest a lot of who I am to Pops,” he said. Now, he said, it’s his turn to coach.

Freeman said his family — he has a wife and five children — got news this week that was greater than any election victory would have been. His wife, Shannon, discovered a lump on one breast almost two months ago; this week they learned “everything came back clear” from tests.

Freeman’s mother, Deborah, has weathered a battle with breast cancer since last year. It slowed but didn’t stop her as a volunteer on the campaign trail. She drove voters to the polls while keeping check on her own health, demonstrating grittiness that Freeman says he admires.

“Sister Deborah,” he referred to his blond mom, “married a black man in Southeast Texas six years after it was legal. She has toughness, standing up and going against the grain; that is all I’ve known from her.

Freeman says he has no regrets about his eight years in municipal politics and governance. He’s proud of what he and City Council have accomplished.

He counts among their successes industrial district agreements with local refineries that say explicitly that Port Arthur people would be hired for available jobs. He said that focus on jobs has been effective and he’s “extremely proud of that.”

When he joined the City Council in 2011, he said, unemployment was around 17 percent Now, he said, it’s in the 5-6 percent range.

He touts achievements in downtown development, too.

“We’ve done a lot of work over the years to see what you see today,” he said, including Motiva Enterprise’s acquisition of the 1912 Federal Building and the Adams Building, which the company will transform into office space for 500 workers.

Motiva is considering acquiring other buildings, too, like the vacant Hotel Sabine and the city’s health department building.

Part of the downtown’s progress has included development of single-family housing, “opportunity zones” to redevelop commercial property, and planned townhomes.

“For so long, there’s been a stigma to being in Port Arthur,” he said. People have talked about it as a “place to avoid.”

“It’s important to put a good face on things, to spreading good news when you have it.”

Freeman was proud to lead the city through recovery from Hurricane and Tropica Storm Harvey, which flooded much of the city.

“I was proud to be the face of Port Arthur during that time. I spoke on Port Arthur’s behalf in rooms where we’d previously been overlooked.

“I’m proud of the response by citizens during the storm. We all went through our own devastation, but Port Arthur people were resilient and hardworking.”

He said Port Arthur people have “quality,” “excellence” and “commonsense” in dealing with their problems, which they showed during the storm and since.

Freeman and the City Council established and promoted applications for federal recovery money through the Texas General Land Office and its agents. Freeman made numerous efforts to send residents through the recovery process there, and the first Recovery homes are going up or are completed.

Freeman said he and the City Council also made great strides in improving the city’s streets and infrastructure. Harvey focused the city leadership in that direction, he said.

The city is moving ahead with replacing its water treatment plant, spent $17 million on roads and related infrastructure this year and has plans to spend $14 million per year more over the next five years in an effort to reclaim crumbling streets.

Freeman said he’s most proud of the relationships he enjoyed with councilmembers, some of whom opposed him a various times. He said he focused on reconciliation with all of the councilmembers, remembering, despite some occasions of bitterness, each of them is “a child of God.”

“If you can let that be a common denominator,” he said, “it makes it easer to respond evenhandedly.”

He said he will cheer on his replacement and the rest of the councilmembers, pray for their success and for the success of the city.

“Port Arthur is my inheritance,” he said of the city where he grew up. “I’ve always had plans to make sure the person after me would do well. That’s in my personality.

“If not, it would be me praying for their downfall, and praying against my own inheritance in this great city. I’ll be cheering for everyone to do their best, to be everything they are called to be.”

“The City Council is doing a great job, everyone who is up there. Our new mayor doesn’t have much municipal experience, so he will need the institutional memories of the players who have been there.”

Freeman and his wife have a private foundation, REACH, which funds projects like Project STEMULATE, a summer science camp for children. He said after the Saturday night political loss, he wanted to sleep in, but his wife, Shannon, an educator, woke him up to do Sunday registration for the girls week of Project STEMULATE.

He said, with a big laugh, that “We saw some Bartie supporters there to sign their children up.”