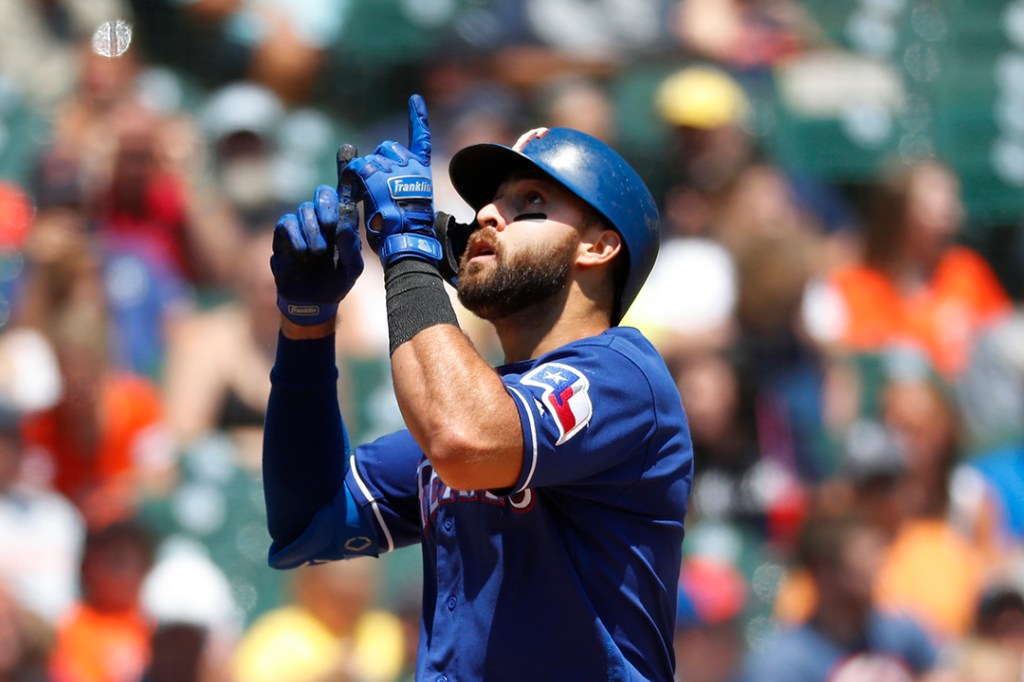 Gallo hit two solo homers, Ariel Jurado threw seven shutout innings and the Rangers completed a three-game sweep of Detroit with a 3-1 win over the Tigers on Thursday.

“I actually made a bold prediction that he was going to hit three homers today to get him to the All-Star Game,” manager Chris Woodward said of Gallo. “He came up a little bit short but it was impressive.”

Woodward’s office in the visitors’ clubhouse at Comerica Park was wall-to-wall balloons, courtesy of designated hitter Shin-Soo Choo for the manager’s 43rd birthday.

“When you get to be my age, you don’t really celebrate,” Woodward said.

His team’s performance was more of a cause for celebration for their manager.

“We’re beating the teams would should beat and we’ve beaten a lot of good teams in the process also,” Woodward said. “We’ve got some tough series coming up, but I think that’s a good thing.

“We set out from the beginning to be in the hunt and to get to the playoffs. Right now, we’ve got as good a chance as anybody.”

Gallo led off the second inning by driving Spencer Turnbull’s pitch deep into the right-field seats. With two outs in the fourth inning, Gallo lined Nick Ramirez’s pitch over the left-field wall.

“I don’t really do that too much, especially against a lefty,” Gallo said of his homer off Ramirez.

It was Gallo’s eighth multi-homer game and his first since Aug. 8, 2018, against the Seattle Mariners. Gallo has 19 homers on the season.

He wasn’t aware of Woodward’s prediction but was happy to deliver.

“I did want to get a win for him for his birthday, so it was nice to kind of play pretty well,” Gallo said.

Turning in the longest outing of his big-league career, Jurado (5-3) allowed six hits as he improved to 4-1 as a starter this season. He struck out four and walked just one. Jurado has won four of his past five decisions.

“He did a really good job of pitching with conviction,” Woodward said. “He let it rip from Pitch One.”

Texas added a run in the seventh inning on Choo’s sacrifice fly.

Shawn Kelley pitched the ninth inning for his 11th save.

The Tigers have lost seven in a row overall, as well as their past seven home games.

“We stayed in the game, got close at the end, got men on,” Tigers manager Ron Gardenhire said. “They’re trying. It’s just a rough time.

“I’ve said it over and over again. I don’t have any answers for it other than they’re up there trying to get hits.”

Turnbull (3-8), the first of six Detroit pitchers, took the loss, his fourth in a row.

Rangers: Woodward said OF Hunter Pence (right groin strain) is scheduled to run the bases at full speed before Friday’s game at Tampa Bay. Following that, an assessment will be made whether to send Pence out for a rehab assignment or activate him from the IL.

Tigers: Turnbull left after two innings because of shoulder fatigue. He had an MRI, which was negative. He’ll be reassessed on Friday.

Rangers: Texas travels to Tampa Bay to begin a three-game series with the Rays. Lance Lynn (9-4) is Friday’s scheduled starter.

Tigers: Home for a three-game series against the Washington Nationals. Daniel Norris (2-6) takes the mound Friday. Aníbal Sánchez is scheduled to start for Washington.