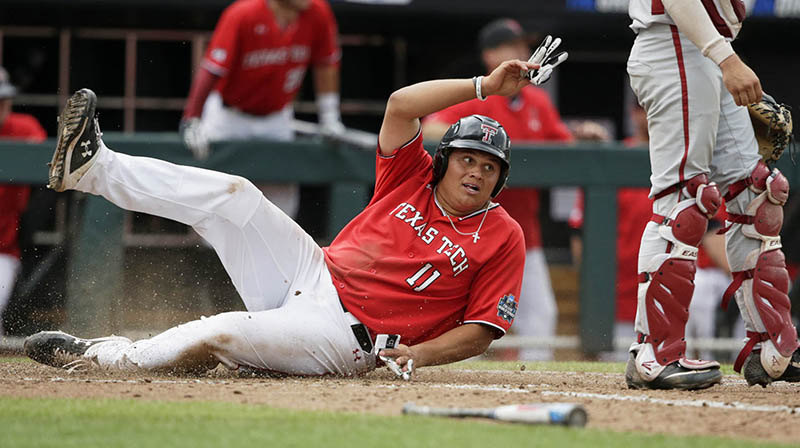 Texas Tech's Cameron Warren (11) scores the go-ahead and winning run against Arkansas on a triple by Cody Masters in the eighth inning Monday. (Nati Harnik/AP) 6-17-19

OMAHA, Neb. — Tim Tadlock obviously would have preferred his team not have to play in the Monday elimination game at the College World Series.

He wasn’t worried how his team would react, though.

“Just kind of had a hunch after the other day,” he said, “that they’re going to be fun to watch with their backs against the wall.”

The Red Raiders were down three runs early against Arkansas before beating the Razorbacks 5-4 for their 25th come-from-behind win this season, second most in the nation.

Cody Masters’ first triple of the season drove in the go-ahead run in the eighth inning, Taylor Floyd held off Arkansas in the ninth and the No. 8 national seed Red Raiders (45-19) bounced back from a 5-3 loss to Michigan.

No. 5 Arkansas (46-20) was eliminated in two games a year after making it to the CWS finals. Both of the Razorbacks’ losses were by one run.

“Kind of hard to swallow,” Hogs coach Dave Van Horn said. “But overall it was a really good year, getting a part of the (SEC) Western Division championship with a really good Mississippi State team. And getting back here, just proud of them and appreciated the effort they gave us all year.”

“I didn’t have many good at-bats before that,” Masters said, “and so whenever I was stepping on deck, just kind of took a deep breath, tried to forget everything and tried to come through for the squad that’s always come through for me when it mattered.”

The 6-foot-3, 230-pound Warren said it was a challenge coming all the way around from first. He actually had been put into motion before Masters’ hit.

He got words of encouragement as he neared third-base coach J-Bob Thomas.

Arkansas had two runners on base with no outs in the ninth after Jacob Nesbit was hit by a pitch from John McMillon (4-3) and 9-hole batter Christian Franklin singled off Taylor Floyd.

Floyd, who earned his fourth save, then retired the top three batters in the Razorbacks’ order, with Matt Goodheart flying out to end the game.

Heston Kjerstad was the first to go deep, helping Arkansas to a 3-0 lead against Caleb Kilian. The Red Raiders got home runs from Warren in the fourth, Easton Murrell in the fifth and Jung in the sixth to go up 4-3.

He gave way to left-handed reliever Dane Haveman to start the eighth, and the Hogs put runners on the corners with one out. Jack Kenley fouled off five straight pitches before sending a shallow sacrifice fly to left, but Kurt Wilson’s throw home was wide and Dominic Fletcher scored easily to tie it 4-4.

Kjerstad’s opposite-field homer into the left-field bullpen in the second inning was his 17th of the year and third in eight NCAA Tournament games. It also snapped a 23-inning CWS scoreless streak for the Hogs since last year.

“It’s always good for someone to get the team rolling,” Kjerstad said. “We kind of feed off each other.”

Warren’s two-run homer, his 18th, was measured at 421 feet into the seats in left-center field. Murrell, who transferred from Arkansas after last season and was batting leadoff for the first time in place of the injured Gabe Holt, hit his first career homer to tie it. Jung’s go-ahead homer was the 15th for the No. 8 overall draft pick by the Texas Rangers.

Texas Tech plays another elimination game Wednesday against the loser of Monday night’s game between Michigan and Florida State.