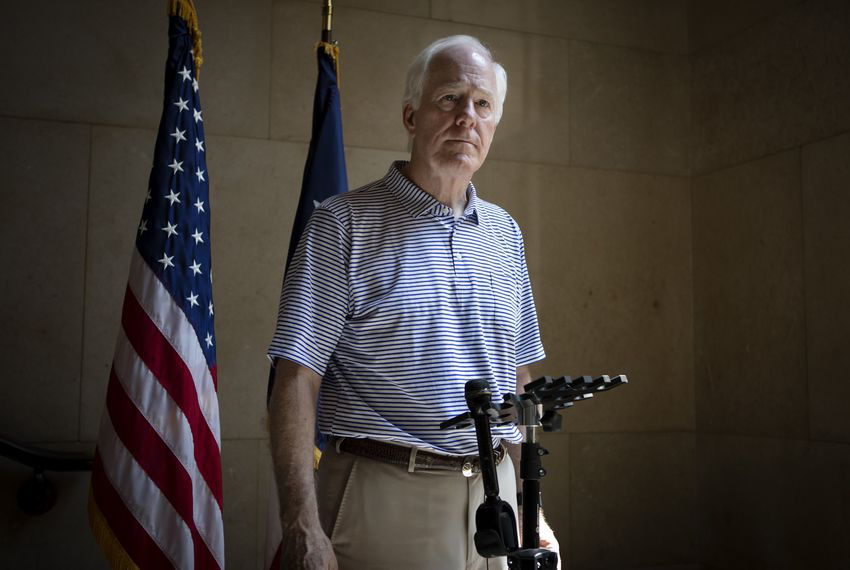 U.S. Sen. John Cornyn, R-Texas, said at a news conference Friday that candidates for elected office should contact the FBI if offered political dirt by a foreign government.

Speaking to reporters at the University of Texas at Austin after giving closing remarks for a youth conference, Cornyn made his position on the issue clear.

“For me,” Cornyn said, “if I knew that a foreign government was trying to influence an election, I would call the FBI.”

Cornyn’s comments come in the wake of a recent ABC News interview in which President Donald Trump said he would be willing to accept damaging information on a political rival — including 2020 Democratic candidates — if approached by a foreign government.

During the ABC News interview, Trump didn’t definitively say he would alert the FBI if faced with such a situation, adding that “it’s not an interference.” He walked back that stance Friday, however, telling the cable news show “Fox & Friends” that “of course you give it to the FBI or report it to the attorney general.”

In response to Trump’s comments, U.S. Sen. Mark Warner, D-Va., tried to pass legislation Thursday via unanimous consent that would have obligated campaigns to notify the Federal Election Commission and the FBI if offered assistance by foreign entities aimed at influencing an election. U.S. Sen. Marsha Blackburn, R-Tenn., raised an objection to the measure, blocking the bill’s passage.

Cornyn said Friday he doesn’t believe legislation is necessary to force presidential candidates to “do what needs to be done” and report foreign interference.

“The simple answer is call the FBI and let them investigate it, “Cornyn said. “We don’t need to pass a law to do that.”

Disclosure: The University of Texas at Austin has been a financial supporter of The Texas Tribune, a nonprofit, nonpartisan news organization that is funded in part by donations from members, foundations and corporate sponsors. Financial supporters play no role in the Tribune’s journalism.