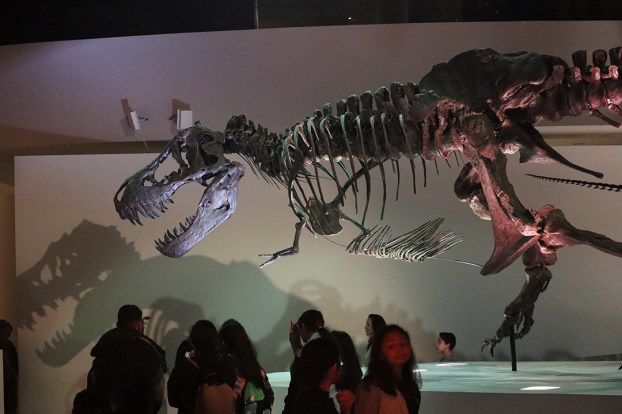 Museumgoers walk in front of the fossil skeleton of a Tyrannosaurus Rex at the Houston Museum of Natural Science on June 5.

HOUSTON — Whether walking among prehistoric fossils, gazing upon mummified, Egyptian remains or wandering through a swarm of butterflies, there is something for all ages at the Houston Museum of Natural Science.

The destination is a surefire way to elicit awe from patrons old and young who get to see and learn about the planet’s wonders.

According to the museum’s head “Discovery Guide” Alex Ruff, the museum welcomes a couple thousand people a day through summer. Weekends are busiest.

“Every Thursday, people can get in free from 6 p.m. to 9 p.m. for our Museum After Dark,” Ruff said. “We experimented with it last year and it did really well. Now, we are having it throughout the summer from June to August.” 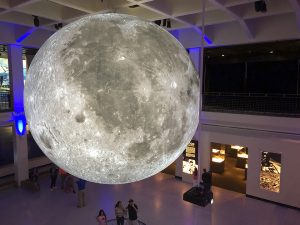 Even regular museum visitors regularly find new exhibits on display. A giant moon installation hangs over the main lobby. Using high-resolution images, attendees can see the moon’s every detail and crater. Its installation is part of the museum’s celebration of the 50-year anniversary of the lunar landing.

“We also have a virtual reality experience that will take you to the surface of the moon,” Ruff said. “Across from that is our In Focus exhibit, which is social media station. We also have Apollo 11 playing on the giant movie theater. We also have a show in the planetarium and we are going to have a lecture on the anniversary (July 20). We’ll have all sorts of things going on.”

One of the special exhibits currently on display is Art of the Gunsmith, which is concerns 15th, 16th and 17th-century firearms from Germany, France, Spain and Poland.

Death by Natural Causes has been at the museum for a few years, but Ruff said the exhibit will run through September.

“It shows all of the weird and wacky ways death is all around us,” he said. 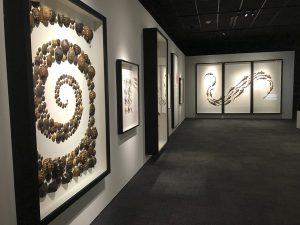 Art created with the shells, feathers and bodies of animals can be found in the Biophilia exhibit at the Houston Museum of Natural Science.

Biophilia is an art exhibit using different animals to show the true beauty of nature. The area is set up like an art exhibit where artists use the bodies, shells and feathers of animals to create displays. In one of the descriptions at the display’s entrance, the artist describes Biophilia as an instinctive kinship with the rest of the living, breathing world and literally translated to “love of life.”

Gems and Minerals (Price of admission)

Ruff said his favorite exhibit is Gems and Minerals, which showcases the planet’s natural beauty in dimly lit area with spotlights to make the gems and minerals sparkle and shimmer.

“I can spend hours in there,” he said. “Our gem exhibit is the most unique in the world. It’s not just a stuffy room with rocks in it. It’s individualized and really cool. The president, who is also the curator of the hall, wanted to give it an art feel and really show its natural beauty. A lot of other places just have it in a case.” 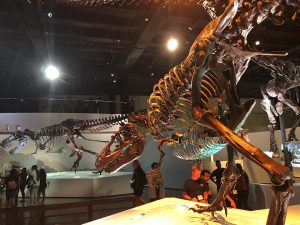 Museumgoers walk around looking at dinosaur remains in the Morian Hall of Paleontology at the Houston Museum of Natural Science on June 5.

Ruff said the biggest hit is the museum’s dinosaur exhibit, which is the third-largest of its kind in the country.

“It’s unique because of the space,” he said. “We’re able to incorporate millions of years of dinosaurs in to one space.”

Museum goers are able to walk back in time starting at the earth’s oldest fossil dated 4.5 billion years ago and up through the Jurassic period to Neanderthals.

Dinosaurs are displayed to represent the way they acted in the wild, whether they are hunting or trying to escape from being the hunted. Each time period also has a mural with it to help illustrate how the animals looked and behaved when they were alive.

“The timeline allows people to walk through time and see how the earth progressed,” Ruff said. 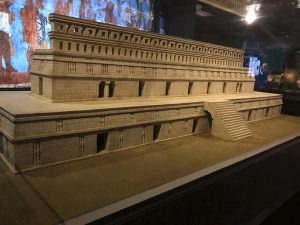 A model of the Maya Temple at Kabah, Yucatan can be found in the Hall of Americas at the Houston Museum of Natural Science.

Hall of the Americas (Price of admission)

Ruff said he believes the Hall of the Americas is one of the most underrated displays in the museum.

“I feel like when people go to the third floor, they are drawn to Egypt,” Ruff said. “Our Hall of the Americas shows where our ancestors came from and the first Americans and things like that. Hopefully, one day, given enough pending donations, we’ll be able to upgrade that hall and make it more elaborate. It shows how cultures and civilizations have grown over thousands of years.”

The hall features many displays of Mayan art, architecture and videos about Mayan life. 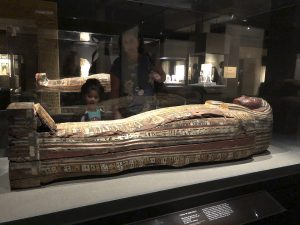 Museumgoers look at the coffin of an ancient Egyptian at the Houston Museum of Natural Science on June 5.

The hall is another museum mainstay filled with ancient tools and artifacts used by Egyptians along with slabs with art and hieroglyphs on them. The main attraction is the numerous mummified remains, synonymous with the timeframe. 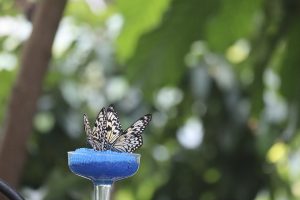 Butterflies feed on the flower in the Cockrell Butterfly Center at the Houston Museum of Natural Science on June 5.

Upon arriving to the museum on can see a glass dome to the side. The dome is home to a 50-foot waterfall and is made to simulate a rainforest environment. The dome is also home to hundreds of butterflies.

The museum has a McDonald’s and a sandwich shop in the main lobby.

Tickets to the museum cost:

See also: ONE TANK TRIP — ‘His Life in Art’: Catch Van Gogh exhibit while you can