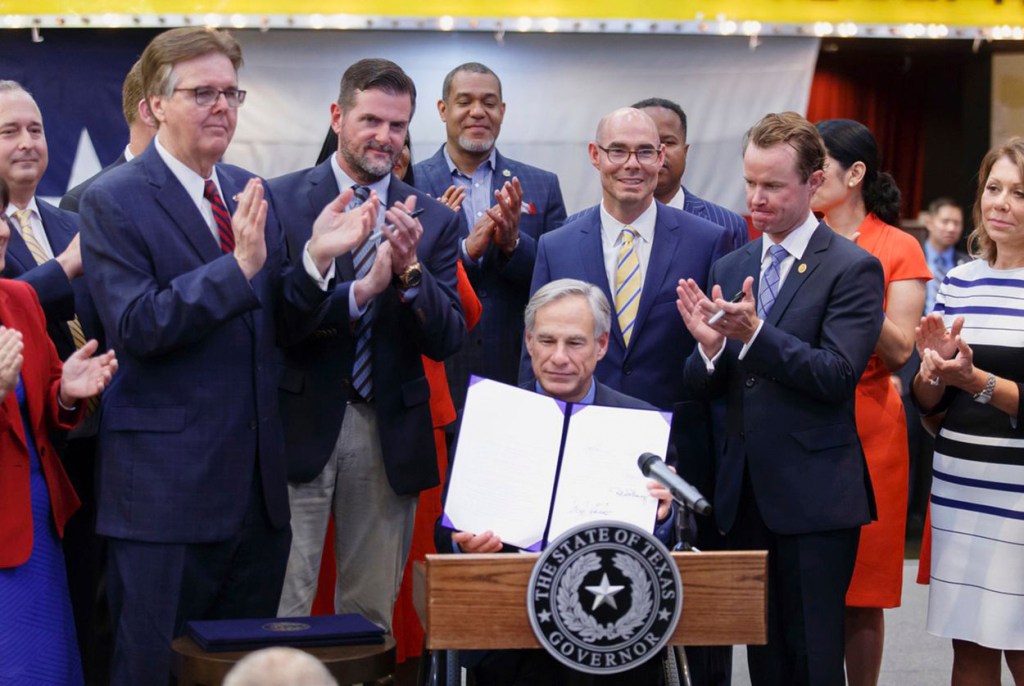 The legislation, which lawmakers hope will act as a how-to guide for future disasters, comes nearly two years after Hurricane Harvey ravaged Houston and hit Texas with record rainfalls. The storm was one of the most severe disasters in Texas history, dumping over 50 inches of rain in some parts of Houston and killing more than 80 people.

On Thursday, Abbott gathered with state lawmakers and local leaders to sign the bills at Gallery Furniture, owned by Jim “Mattress Mack” McIngvale. In 2017, McIngvale opened two of his stores as shelters for Houstonians displaced by the storm.

“We saw a storm, when you looked at it, that was unlike any other storm in the history of Texas,” Abbott said at the signing. “This was a challenge far beyond any challenge we had ever faced in the history of the state of Texas, and I am so proud of the way the people behind me stepped up to help their constituents deal with that challenge.”

Senate Bill 7, authored by Sen. Brandon Creighton, R-Conroe, and sponsored by Rep. Dade Phelan, R-Beaumont, establishes two new funds, the Texas Infrastructure Resiliency Fund and the Flood Infrastructure Fund, to address the effects of Hurricane Harvey and prepare for future flooding and disasters. The $1.6 billion for the funds is taken out of the state’s savings fund, and part of the money will go toward local communities that require a match from state funds in order to free up federal aid.

“Together, what these laws do is this: They ensure that Texas and our local communities are doing far more than just rebuilding in the aftermath of Hurricane Harvey,” Abbott said. “We are rebuilding Texas in ways that will be far better than before Hurricane Harvey struck.”

Early this month, the U.S. House of Representatives passed a $19.1 billion disaster relief bill that releases $4 billion in relief aid allocated to Texas. Throughout this year’s legislative session, Houston Mayor Sylvester Turner has been pressing state lawmakers to tap into the state’s “rainy day” fund to boost disaster relief and prevention efforts.

On Thursday, Turner said the laws are “another important step in Houston’s long-term recovery.”

“Houston experienced one of the worst rain events in North American history,” Turner said in a statement. “We knew if we were going to recover, we needed to have more resources, in this case the state’s Rainy Day Fund.”

The Texas Infrastructure Resiliency Fund houses four accounts, each with a specific purpose. One account, the Hurricane Harvey Account, is designated to provide funds, under the direction of the Texas Department of Emergency Management, for projects related to the 2017 hurricane. The account expires in 2031.

“I have thousands of constituents who flooded and lost everything. I have constituents in this room whose home was swept off its foundation in the middle of the night,” Creighton said Thursday. “Texans were prepared for Hurricane Harvey in the best way that they could possibly be, but we could never have imagined the scale of that unprecedented storm. We will be better prepared next time around to fight that battle.”

In addition to Senate Bill 7, the governor signed three other bills that establish framework for disaster preparedness and relief programs.

House Bill 5 requires the Texas Division of Emergency Management to develop a catastrophic debris management plan and training, as well as creates a work group to advise local governments on how they can assist with recovery efforts. House Bill 7 requires the governor’s office to develop a list of laws that could be waived in the event of a disaster to streamline the recovery process. Senate Bill 6 requires the Texas Department of Emergency Management to develop a disaster response model guide and a wet debris study group for local communities. The bill also creates a disaster recovery loan program for communities that suffered significant infrastructure damage.