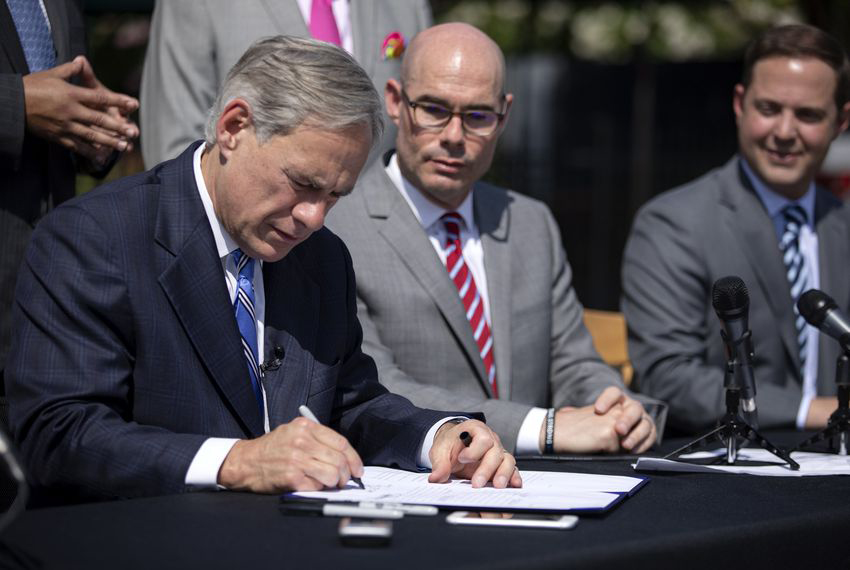 By Riane Roldan
and Shannon Najmabadi

Against the backdrop of an Austin burger joint struggling with its property taxes, Gov. Greg Abbott signed into law Wednesday an expansive reform measure meant to slow the growth of Texans’ property tax bills, long a priority issue for GOP state leaders.

The ceremonial bill signing was a victory lap for top Republicans, who spent the legislative session hammering the issues of school finance and property tax reform. Yesterday, they gathered at an Austin elementary school to witness the signing of a public education package that includes about $5.1 billion to lower Texans’ property tax bills.

“That [bill] will be eroded by increases in property taxes in future years without Senate Bill 2,” Abbott said.

Senate Bill 2 makes an array of changes to the property appraisal and tax systems. New requirements, including that tax rates and other information be posted in an online database, are meant to make the process more transparent and easier for taxpayers to understand.

But the measure includes one controversial provision that requires many cities, counties and other taxing units to hold an election if they wish to raise 3.5% more property tax revenue than the previous year. The growth rate excludes taxes levied on new construction and can be averaged over three years, allowing taxing units to exceed the 3.5% threshold in some of them.

Municipal officials have repeatedly said the 3.5% election trigger will hamstring their budgets and hamper their ability to provide public safety and other local services. Moody’s Investors Service, a credit-rating agency, issued a May analysis that said the law would lead to “minimal” homeowner savings and “hurt local governments substantially.”

In 2017, the Legislature twice failed to pass similar property tax reform measures that could have set the election trigger higher, between 4% and 6%.

Since the 1980s, taxing units have been constrained to 8% annual property tax growth, but voters have had to petition for an election to roll back the increase, a requirement some lawmakers deemed onerous.

“What this does is achieve something that has never been done before with regard to property tax reforms of the past,” Abbott said.

State leaders have said the new law will slow the pace at which property tax bills grow and will update a growth rate set during a period of high inflation. The site for Wednesday’s signing ceremony, Wally’s Burger Express, has seen its property taxes increase significantly in recent years, according to Abbott’s office.

Community colleges, hospital districts and small taxing units — with rates of 25 cents per $100 of taxable value or less — will need voter approval to increase a property tax levy by more than 8% annually.

Notably absent from the celebratory gathering was Sen. Paul Bettencourt, R-Houston, the bill’s author and the upper chamber’s “tax man,” who shepherded the measure through the Senate.

A source familiar with plans for the event said Bettencourt had not been invited.

A longtime advocate for property tax reform, Bettencourt spent much of the session crafting and recruiting support for the top priority bill. But he also caused controversy by publicly questioning a proposal by Abbott, along with Lt. Gov. Dan Patrick and House Speaker Dennis Bonnen, to buy down property taxes by raising the state sales tax by one cent.

“We appreciate his contribution. I don’t know his schedule or keep it,” Patrick said Wednesday.

In a statement, Bettencourt said only that “the clear winners here are the taxpayers of Texas.”

“I am proud of the work I did on their behalf,” he added.