Businesses of the year recognized 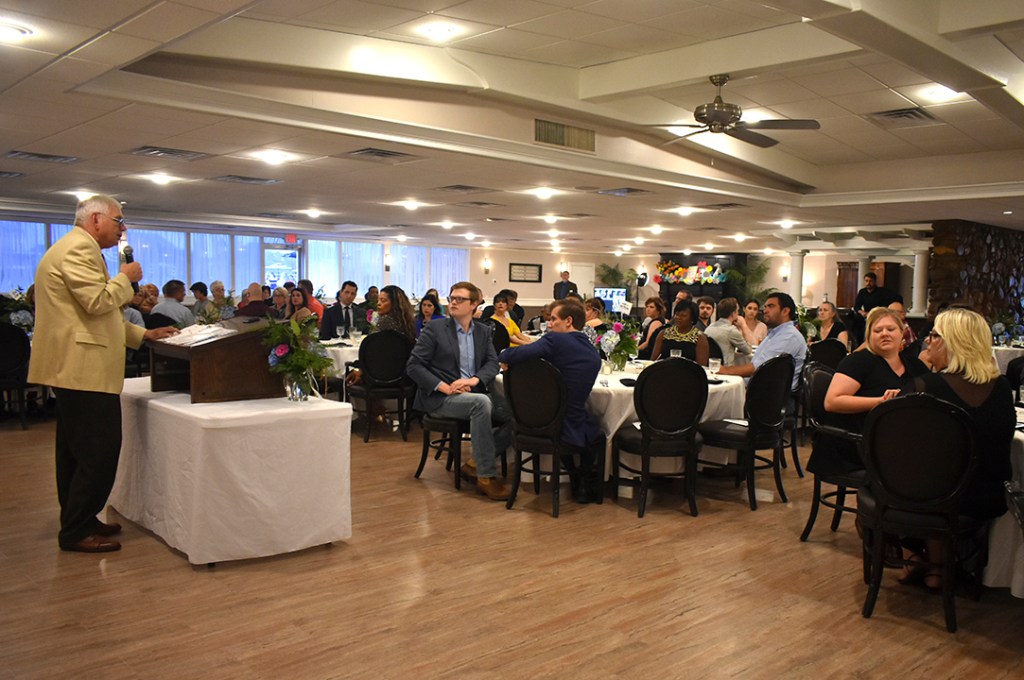 PORT NECHES — At the heart of the small business owner is a dose of ingenuity and perseverance mixed in with a take-the-bull-by-the-horns attitude.

There are fears along with triumphant moments, all of which make or break a business. Those achievements were celebrated Thursday night during the Small Business Development Center’s Business Awards Banquet held at Benton’s in Port Neches.

Port Arthur and Mid-County area chambers of commerce honored their small businesses of the year: 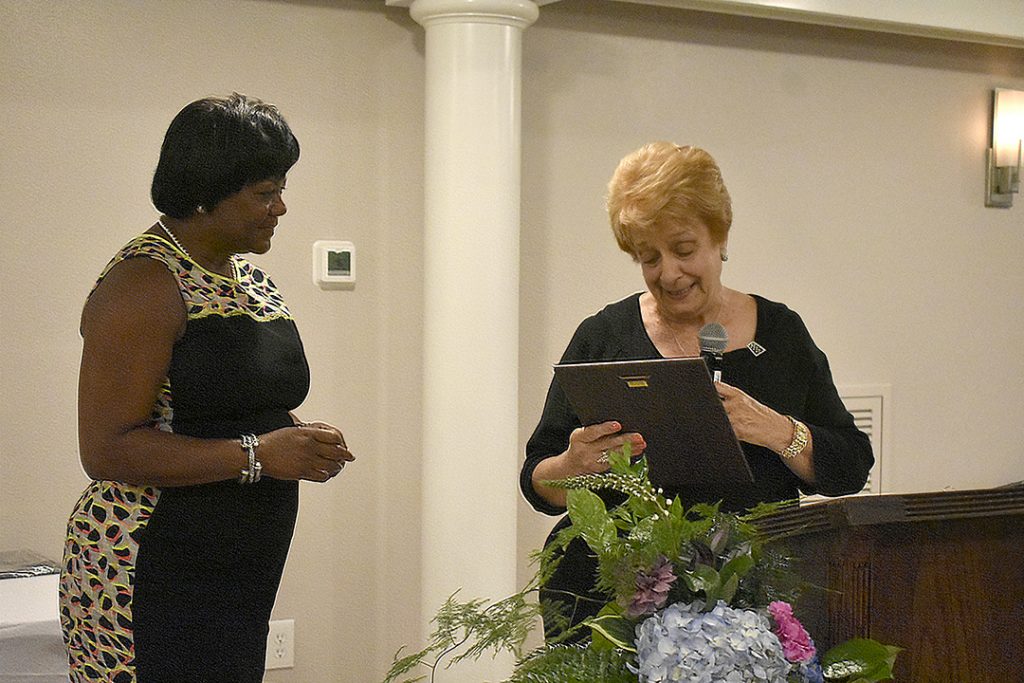 Pat Holmes said her award was not just for her but all realtors, especially after last year. Selling a home is often a joyful event, with some homeowners wanting to downsize while others want a new home for other reasons.

But, “It was a sorrowful year,” Holmes told the crowd while speaking of 2018.

The flooding from Tropical Storm and Hurricane Harvey was something no one expected to ever see and hopes to never see again. 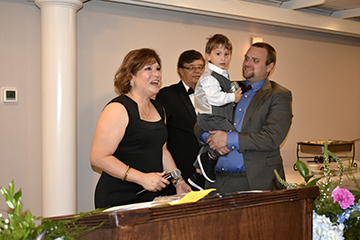 Scott and Tina Legendre brought their 2-year-old son Patrick to the podium as they accepted their award for Groves Café and Coffee Bar. The success of the business was tied to the family as a whole, hard work and loyal customers.

Scott Legendre has a fulltime job in Deer Park. He makes the drive to the café, then to work, and then comes home every night. As the business was taking off the couple welcomed their son, and at one point almost closed up shop. Tina held back tears as she spoke of the loving support from the family in helping with the café and with her son. She said her dad was there washing dishes; her husband building the tables… the list goes on.

The couple also cares about their customers. They didn’t lose power during a recent major storm so they opened their doors and put on a pot of coffee. They’ve let Federal Emergency Management Agency officials use a back room after Harvey, and during a strike at Motiva they made sure the strikers had hot coffee and some food. 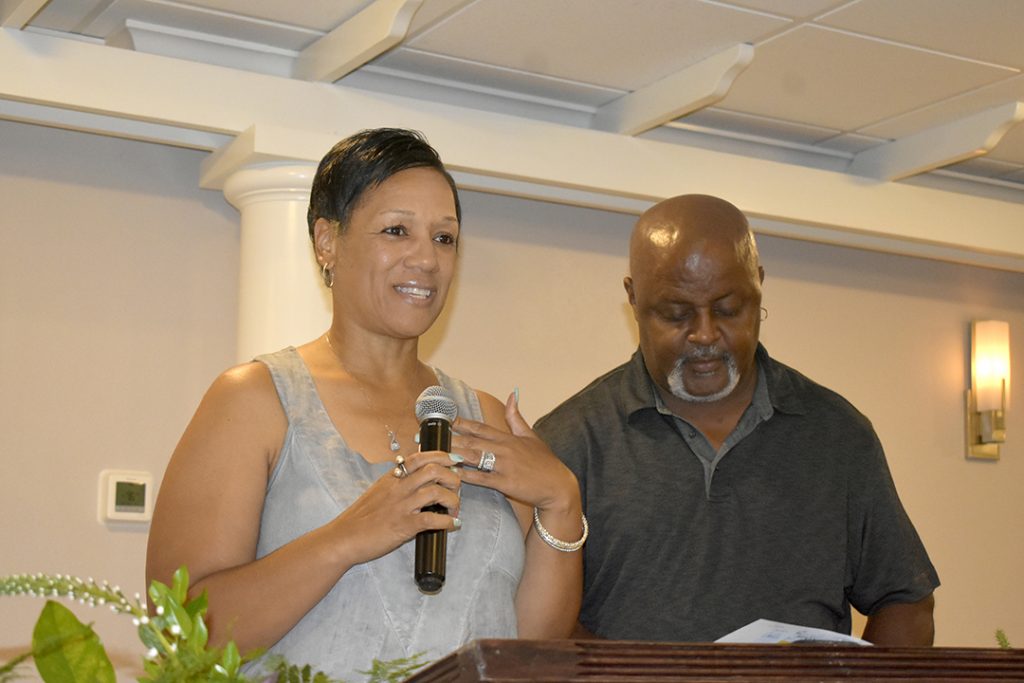 The Start-Up Business of the Year award went to Edith’s Place in Port Arthur, where Tommy and Diane Guidry are owners. The diner is named after Tommy’s mom, and Tommy, the baby of eight kids, learned how to cook from her.

The couple had cooking skills and a commercial kitchen at home, so they decided to “take a leap of faith,” Diane Guidry said.

They called on Leonard Gabriel who “blessed us to allow us to lease his building.”

The down home cooking has garnered many fans, and when the government furlough hit the pocketbooks of government workers, Edith’s offered a free meal to those affected. One day, she said, they sent over 200 meals to the federal prison.

“You have to give back,” she said.

SassyTrendz Boutique in Nederland earned the Retail Business of the Year award. Owner Kimberly Hughes Martinez’s business started with a booth in the parking lot of where she worked in 2000, and in 2004 she opened her own place. But in 2005 health issues caused her to focus on exhibition trade shows.

She reopened in 2008, but business was slow and she thought of quitting but after much deliberation and prayer she kept pushing. She prays before making decisions and she credits prayer to her success.

Maryann Nguyen, owner of Maryann Nails & Luxury Spa in Port Arthur and native of Vietnam, saw the horrors of war in her home country where food was sparse and educational opportunities were few. She made it to the United States, went to school, began work and today has her own nail salon and luxury spa, which was named Service Business of the Year.

Nguyen said she has served six generations of families through the years and thanked them for their loyalty. She says she has a customer who started going to her when she was 70, and now the customer is about to turn 100.

Restaurant of the Year went to Las Rosas Mexican Restaurant in Port Neches. The brother-sister team of Roberto Ortiz and Rosa Sanders spoke about their dream to own the restaurant and the road to get there.

“Thank God and God bless America because you can make it in America,” Ortiz said. “You can be successful in America if you are a hard worker and pay it forward.”

The siblings have stayed open late on football game nights to accommodate the fans and have supported their community.

They even have a second spot in Bridge City and are looking to one day own a restaurant along the Neches River in Port Neches.

Entrepreneur of the Year, or Star Award, went to Gabriel Funeral Home in Port Arthur. Owners Leonard Gabriel Jr. and Francine Gabriel were there surrounded by family and employees. The company will celebrate 42 years in the business in October and are currently building a state-of-the-art facility on Memorial Boulevard near 39th Street.

“It’s very important to have the Lord in your life,” Leonard Gabriel Jr. said in a quick statement after receiving the award.

The importance of small businesses

Since its inception 2,819 jobs have been created with a capital investment of $91.6 million.