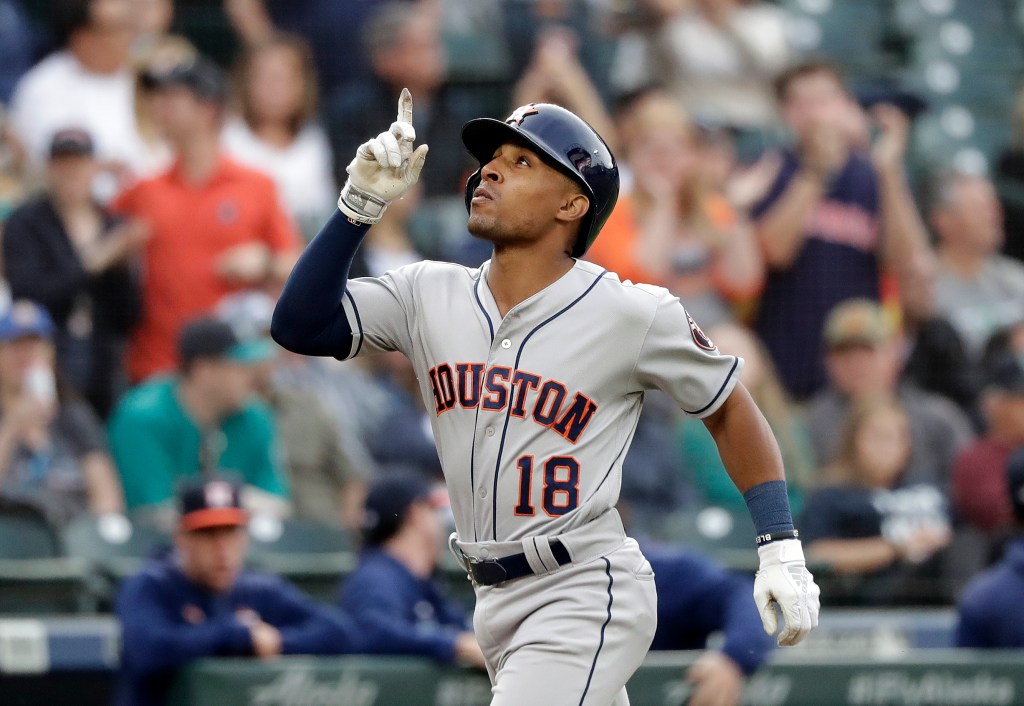 Houston Astros' Tony Kemp points skyward as he heads home on his solo home run against the Seattle Mariners in the third inning of a baseball game Tuesday, June 4, 2019, in Seattle. (AP Photo/Elaine Thompson)

SEATTLE — Even without Jose Altuve, Carlos Correa and George Springer, the Houston Astros are rolling toward another AL West title.

Alex Bregman had two hits and three RBIs, and seven other Astros drove in at least one run as Houston beat the Seattle Mariners 11-5 Tuesday night for its fifth straight win.

“We have good players and we know how to win, but we’ve had to win a little differently,” Astros manager AJ Hinch said before Tuesday’s game. “We’ve manufactured runs a little bit better.”

That’s exactly what the Astros did in coming back Tuesday, scoring three run in the seventh inning and four in the eighth without the benefit of a home run. Houston had two sacrifice flies, three walks, five singles, one double and one steal by Derek Fisher on an overturned call during that seven-run stretch.

“This team is battling every at-bat,” Fisher said. “We’re winning games in a little different way right now and having a lot of fun doing it.”

The Astros have won 9 of 11 and are 5-0 during this road trip. They moved 10 games ahead of second-place Texas in the division.

“We’ve always bragged that we have a deep lineup and we can rely on anybody on any given night to make a difference,” Hinch said. “That’s been tested with those guys out, but we like our depth. I’m happy with how we adjusted to a little more of a speed game.”

The Astros are 5-0 this season against the Mariners, who have lost four straight.

“We’ve got a lot of areas that have been a struggle at times,” Mariners manager Scott Servais said. “We’re in a funk right now. And we’re playing a very good team over there even though they’re banged up. The guys that they have in spots filling in for them are playing very well.”

Astros left-hander Reymin Guduan (1-0) was recalled for Triple-A Round Rock on Tuesday and came in to pitch against the left-hand hitting Vogelbach, who sent a liner off the wall in center to clear the bases.

Andrew Moore, making his first major league appearance since September of 2017, gave up four runs and six hits in 4 2/3 innings as the Mariners starter. Brandon Brennan (2-4) allowed three runs in the sixth.

Wade Miley started for the Astros and gave up three runs in five-plus innings. The Astros have won seven of his last nine outings.

“Our offense exploded in a different way and it’s cool to see,” Miley said. “We made some plays and got through it.”

Jake Marisnick had two hits and two RBIs for Houston, and Tony Kemp and Robinson Chirinos each homered.

Mitch Haniger hit his 15th home run of the season for the Mariners.

Astros: RHP Corbin Martin was optioned to Triple-A Round Rock. Martin, who made his major league debut May 12, was a 1-1 with a 5.59 ERA, including 10 earned runs over 14 innings in his last four starts. LHP Framber Valdez (2-2, 3.12) will replace Martin in the starting rotation and start Saturday against the Orioles.

Mariners: Brandon Bishop, who started in center field, left the game in the fourth inning after feeling tightness in his neck. . RHP Connor Sadzeck was placed on the 10-day IL (retroactive to June 3) with right elbow inflammation.

Mariners: RHP Mike Leake (4-6, 4.71) allowed two earned runs in seven innings while earning the victory against the Angels in his last start. Leake has given up 18 home runs this season, the second most in baseball.