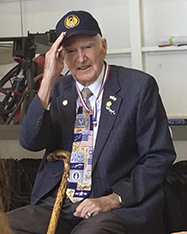 Funeral services for Mr. B. D. Bottoms, Sr., age 96 will be held on Tuesday, June 4, 2019, at 10:00 a.m. at First Baptist Church in Jewett. Bro. Allen Crosby will officiate. Interment will follow the service at Sardis Cemetery with U.S. Air Force Honors and Masonic graveside rites.

Visitation will be held on Monday with the family present from 6:00 p.m. until 8:00 p.m. at Ricks-Bowers Funeral Home in Jewett.

He was born on June 3, 1922, in Newby, to Jack & Nettie Bottoms. He graduated from Jewett High School with the class of 1940, and went to work in Houston for Hughes Tools while he earned his Associate Degree in Business. He entered into the military in the U. S. Army Air Corps on October 5, 1942 and served during World War II until his discharge on September 20, 1945. He received the E.A.M.E. Campaign medal with two Bronze Stars, the Air medal with three Oak Leaf Clusters, good conduct medal, and other awards and citations including the Distinguished Flying Cross for extraordinary achievement while serving as flight engineer/waist gunner of a B-24 Liberator bomber. He was involved in battles in Normandy and other air offensives in Europe.  In 2017, he was given the Knight in the French Legion of Honour Award by the French Consulate in Houston for his efforts in liberating France.

The family requests memorials be made to The Collings Foundation, P.O. Box 248, Stow, MA 01775 or online at www.collingsfoundation.org.

Please visit our website at www.bowersfuneralhome.net to sign the memorial guestbook or leave a message for the family.