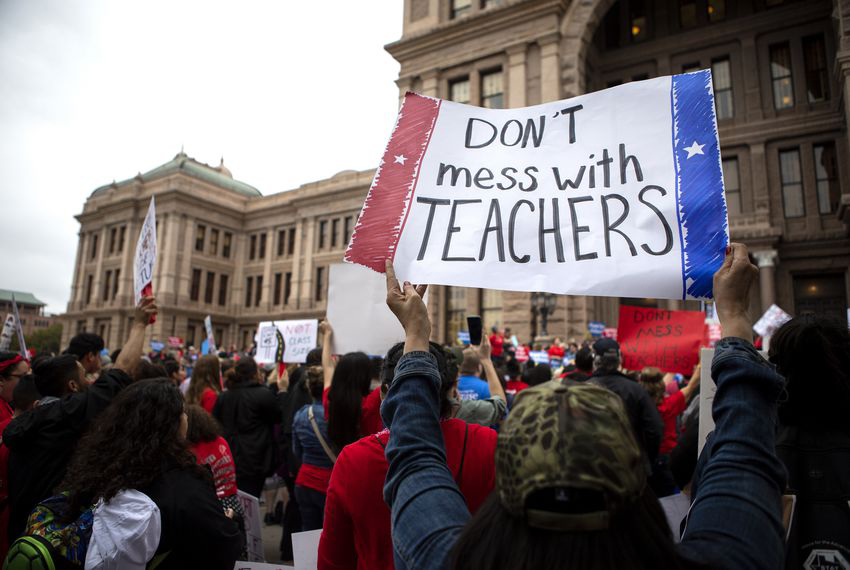 The Texas American Federation of Teachers hold a rally in support of public education at the capitol on Mar. 11, 2019. (Miguel Gutierrez Jr. / The Texas Tribune)

The biggest change in the Legislature this session was the shift in who the lawmakers fear most.

Just a few years ago, the Tea Party wave put the most conservative factions of the Republican Party in the pilot’s seat. For several legislative sessions, word that those restive activists were watching a vote could — and sometimes did — influence what the Legislature was doing and how it was talking about issues.

But another faction, focused on public schools, has come into power, turning the heads of Republican leaders. A 2018 election put more Democrats in office, changing the temperature in the Capitol. And a fat state bank account made it possible to do the kinds of expensive things that lawmakers rarely get to do.

Many issues dear to the far right got only fleeting attention from the 86th Legislature. Lawmakers passed a bill protecting babies born alive after abortion attempts — a rare circumstance — that was a political goal of anti-abortion groups. But the state didn’t join in efforts — like those in Missouri, Alabama and Georgia — to pass “heartbeat” abortion laws limiting legal abortions to the first few weeks of a woman’s pregnancy. They did succeed with legislation barring cities from doing business with groups that provide abortions, such as Planned Parenthood.

Another skirmish in the culture war was waged via the so-called Chick-fil-A bill, with lawmakers ultimately passing a watered-down measure preventing public entities from acting against businesses and people on the basis of sincerely held religious beliefs. And an effort to throw out municipal non-discrimination ordinances undermined an otherwise surefire bid to ban sick-leave laws passed by local governments.

Proposals to allow gun owners to carry guns without permits — an idea popularly known as constitutional carry — fell apart after an enthusiastic advocate decided to help the cause by visiting the private homes of legislators while those legislators were in Austin. The lawmakers saw that as threatening behavior and shut down both the visits and the legislation those visits were intended to promote.

Budget writers temporarily threw another $100 million in spending at the Texas-Mexico border, adding it to — and then quickly deleting it from — the appropriations bill on the last weekend. The governor’s office wanted to put emergency money into those efforts but needed to tap into the state’s rainy day fund to do it; that grab was blocked by Democrats in the House.

The big new spending item in the next budget is the $11.6 billion going into education and property taxes — a number that includes, to the delight of the right and others — $5 billion for property tax relief. Lawmakers hope that will show up as an 8-cent reduction in your school property taxes the first year, and a 13-cent reduction the second year. Some Democrats would rather have spent that money on public schools, but that was the compromise. State leaders tried, at one point, to sell everyone on a sales tax increase that would pay for a property tax cut, but the swap turned out to be unpopular on a bipartisan basis. It never came up for a vote in either the full House or the full Senate.

The success of the education/property tax package is testament to the last elections. Everyone in the Legislature was hearing about property taxes from Texas homeowners and businesses. And the cultural conservatives who’ve dominated Republican primaries for the last decade were effectively shunted to a political siding this time as the education train moved through.

The House had a new speaker, but that’s not enough to turn a government around. It takes some turned heads in the other two offices — governor and lieutenant governor — to get the change in direction Texans saw in their Capitol this year.

More voters showed up last November, and while Texas remained red, it was less red than recent history led people to expect. Republicans nervous about Democratic advances were looking over their shoulders and thinking about the 2020 election cycle.

Noisy suburban Republicans demanded more attention on the public education systems that drew many of them to the suburbs in the first place; some Republican incumbents had unexpected turbulence in their elections. That turned heads, too.

And the comptroller started this legislative session with good news for anyone seeking solutions to expensive political problems like schools and property taxes: The state had plenty of money — at least for the next two years.