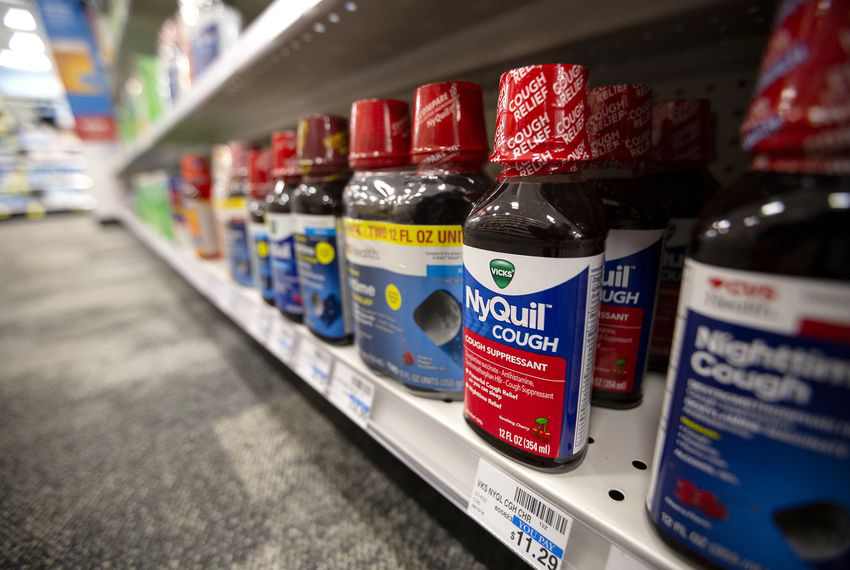 Bottles of cough syrup on sale at CVS on May 20, 2019. (Juan Figueroa/The Texas Tribune)

Starting in September, Texans under 18 years old will no longer be able to buy popular over-the-counter cough medicines like NyQuil and Robitussin under a bill Gov. Greg Abbott signed earlier this month.

About 3% of teens in twelfth grade reported taking large doses of cough medicine to get high, according to a 2017 study from the National Institute on Drug Abuse. In large doses, dextromethorphan can cause hallucinations and is also known as “robotripping.” Coleman said he hopes the law will prevent teens from using cough medicine as a “gateway drug” to more dangerous substances.

“We know that young people will find anything that will alter their states, and particularly substances that are legal, and when used inappropriately, they get high,” Coleman said. “The first thing we need to do is crack down on the access to those types of of legal over-the-counter drugs.”

Texas joins 18 other states that have passed similar laws restricting access to the cough suppressant. In January, U.S. Reps. Doris Matsui, D-Cali., and Bill Johnson, R-Ohio, filed a bill that would prohibit selling dextromethorphan to minors nationwide. However, the bill has not moved since it was filed.

The Texas law will also strengthen the connection between pharmacies and their surrounding community, said Chris Krese, a spokesperson for the National Association of Chain Drugs Stores, a trade group that represents pharmacy chains including Walmart and Walgreens.

“Pharmacies, as the face of neighborhood healthcare, also have a commitment to preventing abuse and addiction,” Krese said. “We really want to maintain safe and strong communities and helping to prevent the abuse of certain products is very much integral to that.”

Stores caught violating the new law will first receive a warning, then a $150 fine for a second violation and $250 fines for every violation after that, according to the bill.

Even after the law takes effect on September 1, Coleman said Texans under 18 will be able to buy medicine to treat a cough or a cold that doesn’t include dextromethorphan.

“There’s no dextromethorphan in a cough drop,” he said.

Disclosure: Walmart Stores Inc. has been a financial supporter of The Texas Tribune, a nonprofit, nonpartisan news organization that is funded in part by donations from members, foundations and corporate sponsors. Financial supporters play no role in the Tribune’s journalism.