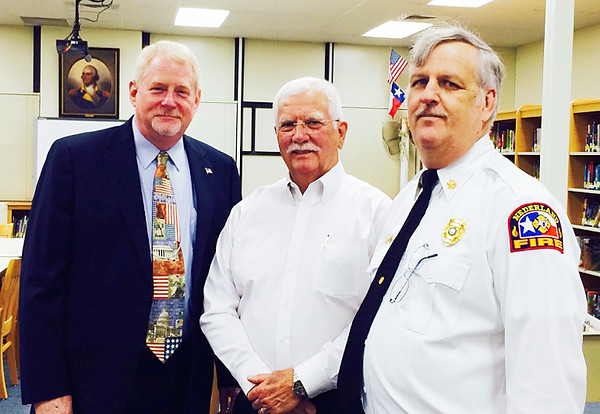 Collins, initially a volunteer, began paid service with the fire department on Oct. 4, 1979, rising to chief in October 2005.

In 2016, Collins was diagnosed with colon cancer, which caused him to miss time. Assistant Chief Terry Morton was named interim chief in August 2018.

Morton told The Port Arthur News then that Collins was always available when he had questions. Collins officially retired Jan. 31 and Morton was named as his permanent replacement.

“I’m really at a loss for words right now,” said Morton, who was hired in 1985 when Collins was assistant chief. “It hasn’t totally sunk in. Gary was a great guy. He was a really good firefighter and a really good chief. I don’t have a bad thing to say about him. He’ll be truly missed around here, I’ll tell you that.”

“He was very dedicated to the fire department,” Morton said. “We didn’t have a hurricane around here for many years until he became chief. Then, it just seemed like he had one after another. That was kind of unique.

“He was christened by fire, so to speak. He taught me a lot and we learned a lot together in those days around those storms.”

Nederland City Manager Chris Duque worked with Collins for 10 years and said Collins was dedicated to his department.

“I repeatedly saw Chief Collins demonstrate his dedication to the men and women in the NFD,” Duque said. “His hard work was instrumental in securing the federal grant funding that resulted in the remodeling of the old City Hall into the Homer E. Nagel Public Safety Complex. Chief Collins will be missed by his friends and colleagues at the city.”

Melancon’s Funeral Home will handle arrangements. Details were incomplete pending a meeting with the family.