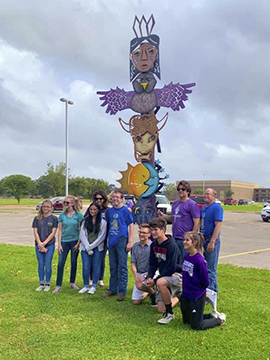 Port Neches-Groves students and staff pose with the totem at Groves Middle School in this recent photo. Courtesy photo

GROVES — Groves Middle School has another source of pride for the Braves — its own totem pole.

The totem was the brainchild of GMS Principal James Arnett and was years in the making.

Shortly after the demolition of the former GMS about nine years ago, Arnett noticed the unused utility pole by the school’s electronic sign. He asked contractors to remove it but it never happened. About three years ago, he came up with the idea of using it as a totem pole, he said.

The pole was actually too tall so the school district’s maintenance department cut it. Then arts teacher Lori Lofton came up with the idea of have art students design the characters for the totem but she retired before it was completed.

Arnett said there are totems at the high school and Taft Elementary School and figured they needed one to represent the Braves at GMS.

The totem was a group effort, he said, and is something that will be around for current and future students as well as the community to enjoy.