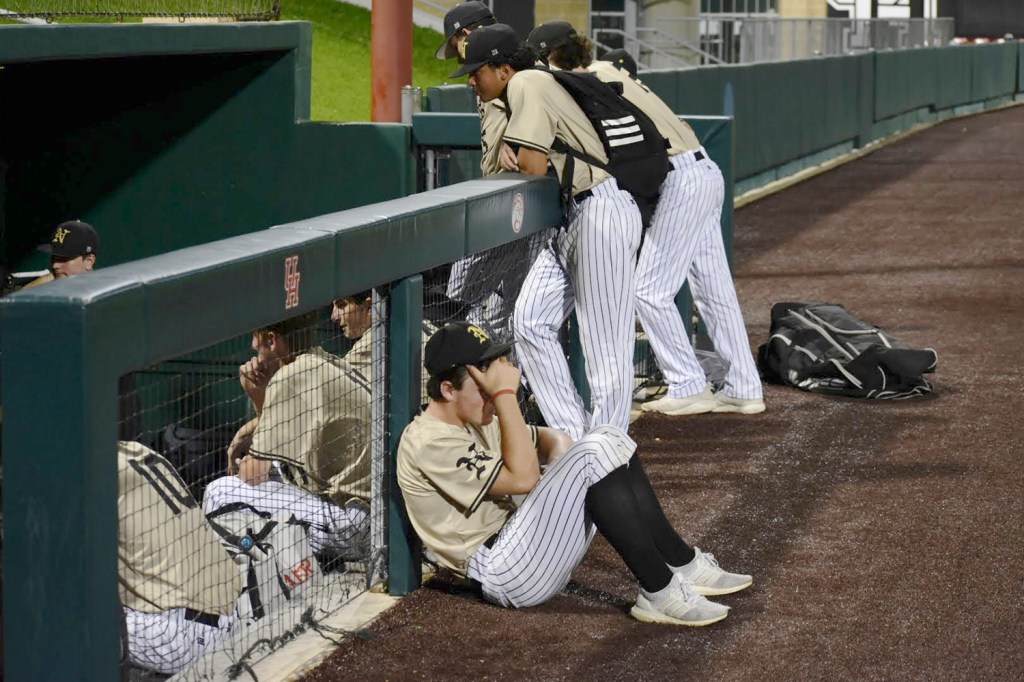 Nederland players exude disgust following a 4-2 loss to Magnolia West in Game 2 of a 5A Region III semifinal at the University of Houston on Thursday. (I.C. Murrell/The News) 5-23-19

Following a series where a controversial call led to one team advancing and another team’s season ending, the opposing head coaches agreed on the interpretation of the ruling itself.

Nederland coach Bryan Spell couldn’t immediately recall in his 20-year coaching career a development like in the bottom of the seventh inning — with his team batting — of Thursday’s Game 2 against Magnolia West. Wade Butler lined a ball that rolled into foul territory only after it passed third base, which under baseball rules should originally be called fair.

Instead, the third base umpire ruled foul, only for the home plate umpire to overrule and call it fair, allowing Omar Mascorro to cross home plate and pull the Bulldogs within 4-3 with one out, needing a win to keep their season alive.

The run was only temporary. A few minutes later, all four umpires gathered, and the changed call was overruled back to the original call. Mascorro was called back to third, and Butler was sent back to the batter’s box.

Two pitchers later, Butler grounded into a catcher-to-first base play, and Mascorro was called out at the plate on the first baseman’s throw for a double play. Final score: West 4, Nederland 2.

“It’s the home plate umpire’s call, but once the third base umpire calls it foul, it becomes a dead ball,” said Spell, a Nederland graduate who wrapped up his fourth season at the helm. “He called it foul. It’s like an inadvertent whistle [in football].

“I just wish he had looked at the home plate umpire and let him make the fair call and see how it would have ended up because we had a little momentum going there. It kind of stings for our kids, but it doesn’t take the pride away I have in what they’ve done.”

For all the thrill of victory in West’s longest playoff run in school history, second-year Mustangs head coach Justin Faltysek’s interpretation was similar to Spell’s.

“My argument was, if it’s foul, you can’t reverse it to fair,” Faltysek said. “I went to the field and voiced my opinion. Fair or foul, we’ll never know, but once a call is made, eventually that’s the call because the call can’t be overturned.”

Now, West (28-5) awaits the winner of the Santa Fe-Georgetown series in next week’s 5A Region III championship round. Nederland finished its season 22-13-2, having made its first region semifinal since 2009 and gone one round further than last year.

Spell looked at the bright side of things shortly after the game, some of his players fighting tears and some waiting just outside of their dugout in disgust that a double overruling likely stifled a comeback that potentially could have resulted in Game 3 Friday.

“I can only think about how proud I am of my kids,” he said. “They battled to the very end. I knew we would.

“A lot of people have seen what we did in the playoffs, but I’ve seen it all year long,” Spell said. “I’ve seen where we’ve been and I know what we’ve gone through. To come out and to end up where we’re at right here is a testament to the absolute toughness of our kids and the leadership of our senior class. I’m just extremely proud of how they represented Nederland, how hard they played and the work they put in. This will hurt, but life ain’t always fair, is it?”

His son Adam was a second baseman on a Nederland team that had lost Game 1 twice before the West series: once to Galveston Ball and again to Port Neches-Groves, where Adam’s first cousin, Carson, is a pitcher and center fielder.

If ever there was a time for the Bulldogs to perform more playoff magic, the seventh inning was it. The Bulldogs loaded the bases in the sixth with two out, but a flyout ended the threat and preserved a 4-1 margin for the Mustangs.

Adam Roccaforte’s single and Mascorro’s double brewed the seventh-inning comeback attempt with a single. Brock Holton grounded out to first base, allowing Adam to touch home.

Butler’s apparent one-run hit was ruled foul, then a hit, then a foul again, much to the dismay of Bulldogs supporters.

“Disappointed and then confused and then frustrated is probably the order of things,” Charles Roccaforte said. “I’ve been a baseball player all my life, and I’ve been an umpire [in girls softball] as well. I’ve seen a lot of different perspectives. Everything I know about the game, the umpire has the call at third base.”

Spell and Faltysek would concur, but Charles thought the third base and home plate umpires had corrected the call.

“That’s what I understood, but I thought they made the right call by putting a guy on first,” Charles said.

Game officials in the University Interscholastic League are typically not available for comment after a contest. Spell said in each of Nederland’s playoff series this year, two officials from each team’s chapter were used. Coaches may also agree to using one chapter’s crew or ask the UIL to assign umpires if a compromise cannot be reached.

“Coach Spell came out and did what he had to do, absolutely,” Faltysek added, referencing Spell’s contest of the foul call. “Nederland, that’s a gritty team. They were tough and battled. They were going to put up a fight. The call may have changed the momentum a little bit.”

That would be the call that changed the overruling. It was not clear which umpire initiated the meeting that resulted in the run being called back.

Mascorro let his frustration show following the close double play at the plate, spiking his helmet in reality that a late surge was stopped.

“I’m not as mad about that,” Charles Roccaforte said. “It was a bang-bang play that could have gone either way. The frustration is that you were so close, and then all of this happened.”

Adam’s fellow senior, Noah Gregory, pitched one batter into the sixth inning, a hit by Willie Ibarra starting a three-run frame that gave the Mustangs some separation. Gregory struck out five and allowed two runs on three hits (West totaled seven hits, one fewer than Nederland). He was asked how he would mentally process the controversial ending.

“I don’t know what to say,” he answered. “I love this team. They work hard for everything we did. It’s been a hell of a year with these guys.”

Heck of a year, indeed.

The Bulldogs started the season 3-7-1 and had gone 10-0 in District 21-5A before missing a chance to clinch the league championship with two straight losses to Barbers Hill. Spell said earlier in the playoffs it was a matter of getting the little things right to change the season’s fortunes.

On Friday, the Bulldogs’ leadoff hitter, Landon Hiltz, announced his intent to play baseball at Coastal Bend College in Beeville, near Corpus Christi.

Despite an ending that will be talked about for years, so will the memories of a season where a team often fought back from adversity.

“I’ve been here 20 years, and I don’t know if I ever coached a tougher group,” said Spell, a 1995 Nederland graduate whose father Delbert also coached the Bulldogs in the early 1990s. “We’ll talk about them for years and the things they’ve been through and overcame.”

Spell just wasn’t immediately sure what words, if any, could console a team so stunned. Charles Roccaforte gave it a shot with his own Bulldog.

“Look, you played your heart out,” Charles recalled telling Adam. “You left it on the field. Things don’t happen the way you want it to. The fact we got as far as we did after the way we started … keep your head up.”

Sixth-inning homer puts Bulldogs one down in series