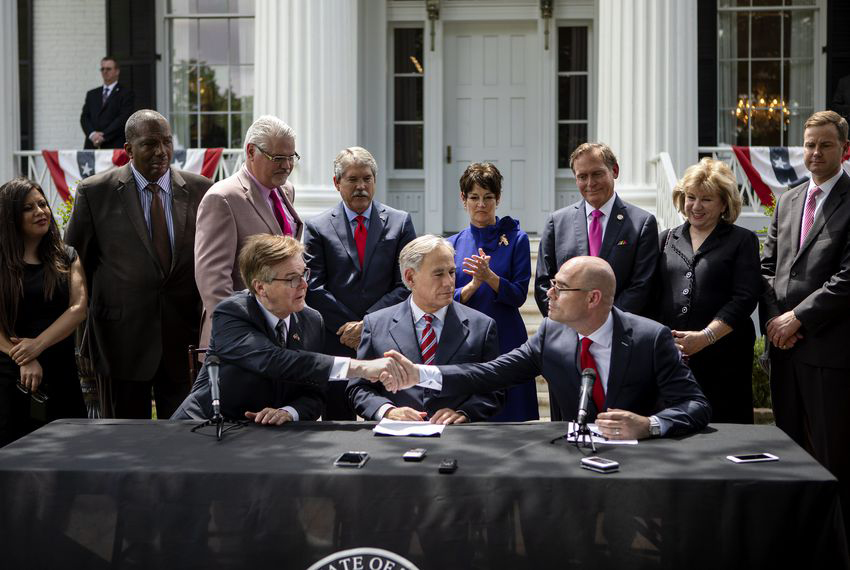 By Cassandra Pollock
and Aliyya Swaby

Texas’ top three political leaders declared Thursday that the Legislature had reached agreements on its three main 2019 priorities: A two-year state budget, a comprehensive reform of school finance and legislation designed to slow the growth of rising property taxes.

Republican Gov. Greg Abbott broke the news on the lawn of the Governor’s Mansion in Austin, just a few days before the Legislature is scheduled to gavel out. Both chambers will need to sign off on the three negotiated bills — House Bill 1, the proposed budget; Senate Bill 2, the property tax bill; and House Bill 3, the school finance bill — before the regular session ends Monday. Language for the compromised legislation, much of which was worked out behind the scenes between lawmakers from the two chambers, had not yet been made public as of Thursday afternoon.

“We would not be here today, making the announcement we are about to make, without the tireless efforts of the members of the Texas House and Senate,” said Abbott, flanked by Republican Lt. Gov. Dan Patrick, House Speaker Dennis Bonnen, R-Angleton, and other House and Senate members who played key roles in negotiating the three pieces of legislation. Almost five months beforehand, as state lawmakers began tackling the issues before them, Abbott, Patrick and Bonnen had pledged from that same spot in front of the Governor’s Mansion to work together and deliver on meaningful school finance and property tax reform.

“Frankly, we’re more together than we’ve ever been,” Bonnen said. “The people of Texas are those who win.”

Thursday’s presser maintained the “kumbaya” theme that the three leaders have worked hard to set this session as the Legislature tackled reforms on some of the state’s most complicated and thorny policy issues. And, though the conference was light on policy specifics, Bonnen told reporters that the House would vote on the trio of updated legislation “as soon as it’s available.”

According to a flyer detailing some of the components of the compromise reached Wednesday night, the school finance bill will include funding for full-day pre-K and an increase in the base funding per student, which hasn’t changed in four years. It also pumps in $5.5 billion to lower school district taxes up to 13 cents per $100 valuation on average by 2021 — though leaders dodged questions Thursday on exactly how and where the extra money would come from.

The compromise bill, Bonnen said, would reduce recapture payments that wealthier districts pay to shore up poorer districts by $3.6 billion, about 47%. But he also said the state could not afford to completely eliminate recapture, also known as “Robin Hood,” because it would cost too much to completely reimburse school districts from state coffers alone.

The bill will include funding for districts that want to create a merit pay program, giving more to their higher-rated teachers. Though the House decided to nix this from its initial version of the bill, the Senate put it back in and apparently won the fight to keep it in.

Teachers associations and unions argued a merit pay program would open the door to school districts using the state standardized test to decide which teachers receive bonuses. The bill does not require districts to use that standardized test.

It also would include additional funding for “dynamic teacher compensation” tied to the base funding per student. But it was unclear exactly how much school districts could expect for these raises or how they would be required to allocate them for teachers, librarians, counselors, nurses and other school employees.

Bonnen, asked by a reporter after his remarks about how the two chambers had handled differences on the teacher pay issue, said he was going to “shut it all down right now” before diving into a football reference.

“We won the Super Bowl today,” he said, “and we’re not going to talk about whether the quarterback or the running back had more success in our win.”