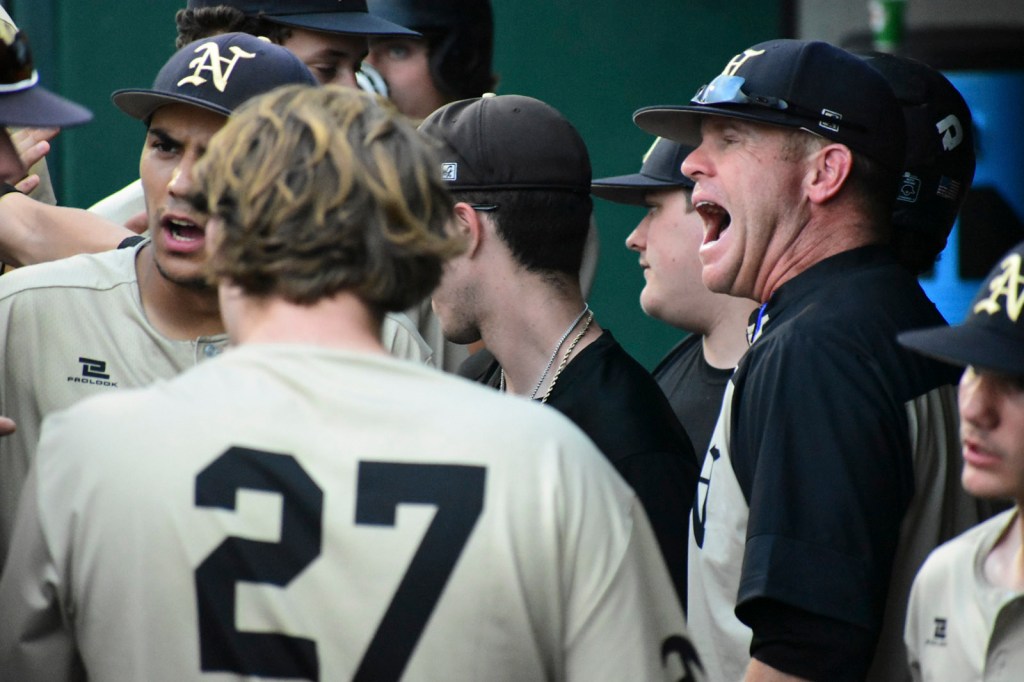 HOUSTON — It was one thing that Magnolia West came from 1-0 down and beat Nederland a second straight game.

It was another thing that a hit Nederland so desperately needed in the seventh inning was ruled foul, then a hit, then a foul again.

A call that was overturned, then changed to the original ruling in the bottom of the seventh inning stifled the Bulldogs’ comeback attempt and led to a 4-2 West victory Thursday to clinch a 5A Region III semifinal series in two games at the University of Houston’s Schroeder Park.

With one out and Nederland down two runs, Wade Butler hit a roller that went past third base in fair territory and then rolled over the foul line to apparently score Omar Mascorro. That’s when the third base umpire ruled a foul ball despite the home-plate umpire calling fair at the same time.

The call was overturned to make the score 4-3, only for it be overturned again, sending Mascorro back to third and Butler back to the plate. Butler grounded out to catcher Brody Szako, and then first baseman J.P. Ellwanger threw out Mascorro at the plate to end the game.

Bulldogs coach Bryan Spell said the play was essentially ruled dead once the third-base umpire called foul, adding he wished the official had checked with the home plate ump before making the call.

Nederland (22-13-2) started its truncated rally with an Adam Roccaforte single to chase starter Robert Revels, who saved Game 1 and won Game 2. Mascorro doubled and Brock Holton drove home Roccaforte, batting into an unassisted play for Ellwanger to bring up Butler.

West (28-5) came from a run down for the second straight game and posted three runs in the sixth inning. The Mustangs earned their fourth best-of-three sweep, while Nederland was denied a third comeback from one game down this postseason.

The Bulldogs have lost in four games at Schroeder the past two seasons, dating back to last year’s 5A Region III quarterfinal loss to Barbers Hill.

Nederland starter Noah Gregory retired the first two batters in the top of the fifth before No. 9 batter Austin Maddox and top-of-the-order Dylan Van Wicklen drew back-to-back walks. Carson Carpenter capitalized with a one-run single to tie the game at 1-1.

The Mustangs pulled away with a three-run, five-hit sixth inning. Willie Ibarra, Connor Phillips and Szako each singled to lead things off. Ibarra’s hit ended the night for Gregory, who allowed two earned runs on three hits and four walks.

Ibarra scored the go-ahead run on a wild pitch, and J.P. Ellwanger and Maddox delivered back-to-back one run singles off Jacob Mares, who was 3-0 in the playoffs. Revels escaped trouble and left bases full in the Nederland sixth. Wade Butler was hit by a pitch, and with two outs, Chandler singled and Brian Davila walked. But Landon Hiltz’s pop-up to shortstop quelled the opportunity.

The Bulldogs led 1-0 in the bottom of the fourth thanks to Corbin Chandler’s double to send home Rene Cunningham. Chandler and Mascorro each went 2 for 3, while Kamden Grant and Butler each had a single.

West will take on either Santa Fe or Georgetown.