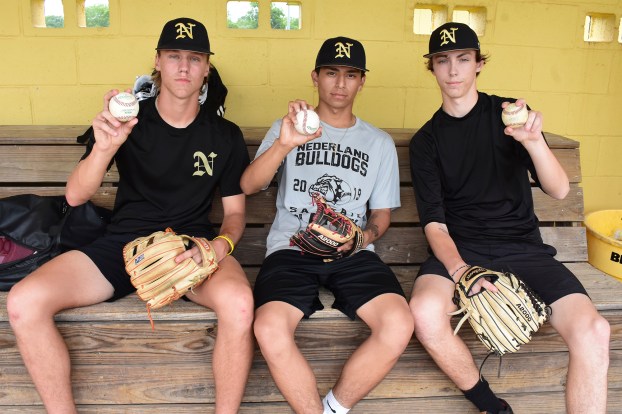 From left, Noah Gregory, Jacob Mares and Conner Kemp have pitched Nederland’s way into the 5A Region III semifinal round against Magnolia West. (I.C. Murrell/The News) 5-21-19

For much of this season, Jacob Mares was a relief pitcher for Nederland.

His four saves were indicative of his ability to close out big wins for a team that made the third round of the 5A playoffs a season ago. They only tell part of his story, though.

“They helped me get ready for games I needed to come in to play and do my best,” he said.

The senior was elevated to the starting rotation for this year’s playoffs, and a 1-0 regular season record is now 4-0 with a 0.86 ERA and 40 strikeouts in 40 2/3 innings. Mares has allowed one earned run in three playoff games, and that was in a complete-game, must-win Game 2 against Galveston Ball, when the Tornadoes tagged him for three total runs.

“Jacob pitched for our JV last year and did a real good job,” Nederland pitching coach Kyle Green said. “The whole thing with these guys is that they have bought into the system of what we wanted to do. … I told [head] coach [Bryan] Spell, we really need to look at bringing this guy up for our playoff situation. He stepped into crucial situation and did a great job for us.”

It took a complete-game effort each for Mares and his fellow seniors, left-hander Conner Kemp and Noah Gregory, to help Nederland move past Port Neches-Groves in the 5A Region III quarterfinal round. PNG won Game 1 without an earned run with Kemp (8-4, 1 save, 1.64 ERA) on the mound, but Gregory and Mares came on to toss back-to-back wins.

“Even after that first loss, they bounce back to win the next two,” said Kemp, who also lost Game 1 to Ball but won Game 2 to sweep Angleton in the area round. “That just proves to me they have my back, no matter what. Even after losing that first game, they never lose faith in me. They always go at it, like 100%, when I’m on the mound. If we do lose, they’ll try their hardest, no matter who’s pitching.”

Green, a 1989 Nederland graduate and former Lamar pitcher and coach, said Kemp and Gregory have matured from last season, when Nederland won the District 22-5A title and made the 5A Region III quarterfinals.

“… Gregory has always had the arm strength, the velocity and all that going. Learning how to pitch, getting everything under control with his control has helped him out.”

Gregory spent the past summer improving his velocity while working with Matt Thompson, coach of the Texas Sun Devils USSSA team from Beaumont.

Mares said he’s learned to stay consistent from Gregory and Kemp throughout the season. Gregory did not break into the starting rotation last year, when Braydon Credeur and Alan Underwood were among Nederland’s key arms.

“They’ve put in a lot of work to stay consistent throughout the game, so that’s what I had to do,” Mares said.

The Bulldogs will get to see the University of Houston’s Schroeder Park (3100 Cullen Blvd.) for the second straight year and are hoping for a better result this time against a Magnolia West squad that bats .369 and has smashed 18 home runs. Barbers Hill won last year’s region quarterfinal there.

“I think we’re ready for them,” Kemp said. “I mean, we can beat anybody in the state if we play good. We’ve just got to put it all together.”

Kemp, a Lamar and McNeese State prospect who needs just two strikeouts for 100 on the season, is expected to start Wednesday. Gregory (9-2, 1 save, 2.18 ERA, 71 strikeouts) is the likely Game 2 starter.

“It’s going to be a big game,” Gregory said. “They’re a good hitting team, apparently. I’ve just got to command the strike zone and throw my best.”

Nederland, West to tangle at UH

Nederland made the most of a baseball playoff series within a short radius of its own backyard. As a reward... read more