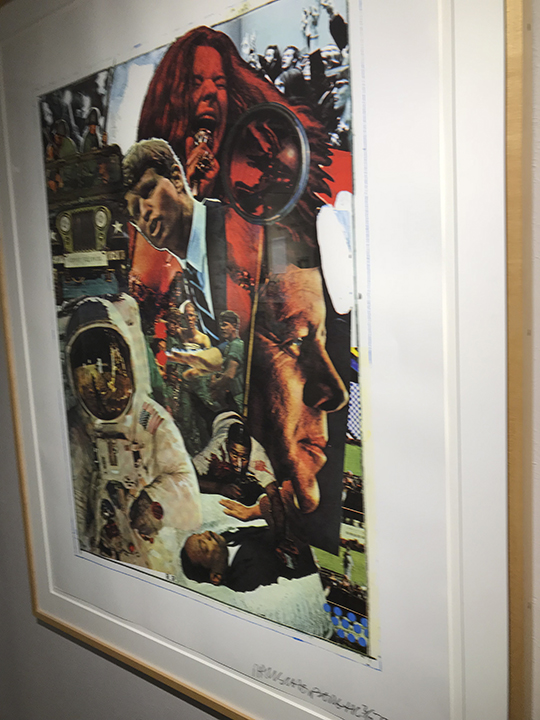 A limited edition print of Rauschenberg’s work about the 1960s is shown at the Museum of the Gulf Coast in his hometown of Port Arthur. (Ken Stickney/The News)

The artistic genius of Port Arthur native Robert Rauschenberg entered a new value stratosphere this week, drawing a winning bid of $88.8 million for his 1964 silkscreen Buffalo II, auctioned at Christie’s on Wednesday.

“In my recollection he sold that work for $16,900 in 1964,” said Dr. Sam Monroe, former president of Lamar State College Port Arthur and president of the Port Arthur Historical Society. The work was in the hands of a private estate.

“Bob liked to do large pieces,” said Monroe, who was a friend of the artist. Rauschenberg gave generously to the Museum of the Gulf Coast in Port Arthur, where he donated several pieces to the gallery in his name — which he also set up.

Last summer, the Rauschenberg original “Barely There,” a combine work, was shown for the first time publicly at the museum.

The artist was born in Port Arthur in 1925 and graduated Port Arthur High School. He lived with his family on 17th Street in a home now torn down. He later graduated the University of Texas and eventually moved to New York City, where he earned lasting fame.

The piece was created in the same year that Rauschenberg won top honors at the Venice Biennale, which cemented his fame.

“It was a great piece, one of his first or early silk screen pieces,” Monroe said of Buffalo II.

Tom Neal, director of the Museum of the Gulf Coast, said with the piece up for auction, the museum received visitors this week from north Texas who came specifically to see the gallery. Some of the Rauschenberg merchandise in the gift shop was also sold.

Monroe said that Rauschenberg, an abstract expressionist who created numerous pieces related to the decade of the ‘60s, included images of President Kennedy in several works, such as Buffalo II.

Ironically, the artist also lobbied personally before Congress for legislation that would protect artists when their works were resold, enabling them to share in the benefits of a rising market. That effort failed nationally, but achieved success in California.

The artist, Monroe said, was “very much an activist for social causes.”

Monroe said “there is value” in artistic work, and Rauschenberg’s may get a boost by this sale price.

“The art world has seen prices go up and down,” Monroe said. “It’s almost like precious metals. It’s another form of capitalization if you hang on to it.”

Image adjustment: Will downtown project uplift all of Port Arthur?

For Sam Monroe, community outpouring of emotion that was unleashed at Motiva’s downtown celebration this week was about more than... read more