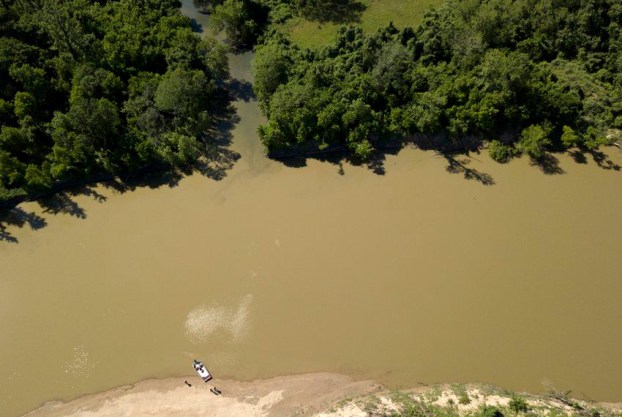 Downstream from Inland Environmental and Remediation, contaminated water empties from Skull Creek into the Colorado River south of Columbus, Texas. (Michael Stravato for The Texas Tribune)

Three months after the waters of Skull Creek first turned black, a Travis County state district judge issued a temporary injunction Tuesday against Inland Environmental and Remediation and David Polston, its president, requiring the company to stop accepting waste and halt any further polluting of the creek.

The injunction prevents Polston from storing or processing any waste at the company’s site near Altair, just south of Columbus, in a manner that “causes, suffers, or allows discharge into or adjacent to waters” in the state. The agreement — reached among the Texas attorney general’s office, the Lower Colorado River Authority and Polston’s lawyers — also requires the defendants to “abate and contain all spills and discharges at the site” and start removing and properly disposing of waste.

Inland processes oil and gas drilling waste and turns it manufactured products like road base, according to its website. Its site is adjacent to Skull Creek, which flows for more than 10 miles before emptying into the Colorado River, which ultimately flows into Matagorda Bay, a popular fishing and boating spot on Texas’ Gulf Coast.

Under the injunction, Polston is required to submit progress reports every Monday to the Texas Commission on Environmental Quality, the LCRA and the attorney general’s office detailing the actions Inland has taken to comply with the injunction’s stipulations. They include assessing the extent of the contamination, removing road base material along the creek, and creating a detailed inventory and a map of all waste at the site.

“I hope I have not left any doubt in your mind as to how serious I am taking this — the court is taking it,” Judge Dustin Howell told lawyers Tuesday. “Certainly, having heard the day of evidence that I heard yesterday, it’s obvious that there is something that needs to be addressed here.”

Howell listened to testimony from an environmental investigator, a toxicologist and other officials from the TCEQ who described deteriorating and improperly stored containers at the site. An April toxicology report from the TCEQ said that water samples collected in Skull Creek showed elevated levels of xylene, toluene and ethylbenzene, all hazardous chemicals associated with oil and gas waste.

Howell, who set a January 2020 trial date for the case, also ordered the company to:

Residents around the unincorporated community of Altair first noticed black water in the creek in early February. Investigators from the TCEQ made a visit to the site two days later, when they hand delivered a letter demanding Polston take immediate action to halt the discharge of waste into the creek.

Last month, the court issued a temporary restraining order against the company to halt the discharge of waste into the creek.

The Texas Railroad Commission ordered the Altair facility to stop storing oil and gas waste in 2017, after the commission turned down an application for a permit renewal from Boundary Ventures — a company at the same location that lists Polston as its president and director — as the company was entering bankruptcy. An April 2017 letter from the commission’s oil and gas division said the facility “may not accept any additional waste, and must begin closure activities.”

The creek was still flowing black earlier this month before last week’s heavy rains flushed out much of the dark water, according to Charles Rogers, an emergency management coordinator for Colorado County.

Associated Press BAYTOWN — A medical examiner has ruled the fatal shooting of a 44-year-old Houston-area woman by a police... read more