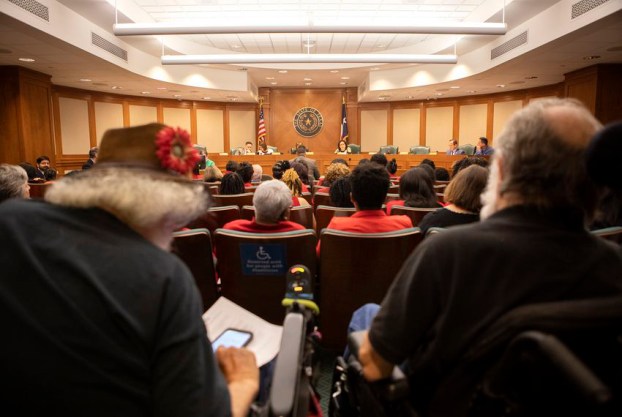 The House Elections Committee holds a May 15 hearing on Senate Bill 9, which passed through the Senate last month.  Miguel Gutierrez Jr./The Texas Tribune

Texas Republicans and advocacy groups typically on opposite sides of voting rights fights went into 2019 with one bit of electoral common ground — voting machines with paper trails.

But with less than two weeks remaining in the legislative session, the main legislative vehicle for a statewide move toward that kind of election equipment appears to be gutted. Left in its place is a controversial, wide-ranging election bill that’s been offered as an election security measure but has instead been catalogued by opponents as a pathway to state-sanctioned voter suppression that could go as far as criminalizing honest mistakes while voting.

In opening his pitch on the Senate floor in mid-April, Hughes said the “heart of SB 9” was a provision requiring counties to use voting machines that provide an auditable paper trail that can be verified by voters by the 2024 general election.

“It’s our responsibility on behalf of the people of Texas to make sure each county is conducting elections in the most secure way possible or practicable and that voters can truly trust the results,” Hughes said. “This shift to systems with a paper component, with those audits that will follow, will give certainty to every Texan that their vote will be counted fairly.”

The Senate signed off on the measure on a party-line vote. But when it made it to the House Elections Committee on Wednesday, state Rep. Stephanie Klick, a Fort Worth Republican and the panel’s chair, offered up a substitute version of the bill that stripped the voting machine language altogether.

She left in place the other changes to election practices that proponents have generally described as election security and integrity measures meant to zero in on wrongdoers, not legitimate voters. Hughes previously chalked the other changes up to an attempt to address problems he had heard about from election administrators, district attorneys and the attorney general’s office.

But those changes — many of which are actually opposed by election administrators — are extensive and significant.

The legislation would make it a state jail felony for Texans who vote when they’re ineligible even if they did so unknowingly, elevating that offense from a Class B misdemeanor to include possible jail time and a fine of up to $10,000. Though federal law generally allows voters to receive assistance in filling out a ballot by the person of their choice, SB 9 would authorize partisan poll watchers or election officials to be present at a voting station if a voter is getting help from someone who isn’t a relative. Those individuals would then be allowed to examine the voter’s ballot before it’s submitted to determine whether it was filled out “in accordance with the voter’s wishes.”

If they’re not related, SB 9 would require people who drive at least three voters to the polls at the same time for curbside voting — popular among the elderly and people with disabilities — to sign a sworn statement affirming those voters are physically unable to enter the polling place without personal assistance or health risks.

And the legislation grants the state attorney general direct access to the voter rolls and essentially allows Texas to participate in a controversial, Kansas-based voter verification program that’s intended to allow states to compare voter rolls to find people registered in multiple states but has proved to be ineffective, inaccurate and mired in cybersecurity weaknesses.

Laying out SB 9 before a packed committee room Wednesday, Klick told her colleagues the intent of her version of the bill was “neither voter suppression nor to enable voter fraud.”

“Ultimately, the intent of SB 9 is to strengthen election integrity and make sure all votes cast are legitimate votes and no legal voter is inhibited from casting their ballot,” Klick said.

But that was quickly countered by the first few individuals who testified before the committee recessed.

The Texas Association of Election Administrators re-upped its opposition to the legislation, with its president, Chris Davis, speaking against what he called the “criminalization of poll workers” and other “bad policy” in the bill. He focused on the provisions allowing poll watchers to record ballot counting where voting is happening, the curbside voting provision and new language added by Klick that regulates where counties can place voting centers if they allow what’s known as countywide voting, which allows voters to cast their vote at any polling place and not just the one in their voting precinct.

“As the very people that will be tasked to carry out this bill’s measures and quite frankly administer your next elections, these are our problems with it,” said Davis, the election administrator in Williamson County.

Several individuals testified against the bill citing concerns about the chilling effect it could have on voters with disabilities. Jeff Miller of Disability Rights Texas explained there was no safe harbor for those assisting people with disabilities from a provision that would make it a state jail felony to unlawfully assist a voter by suggesting even by gesture how a person should vote.

Miller said the harsher penalty could make it tougher to find people willing to assist voters if they fear they could be charged with a crime while helping voters with intellectual or developmental disabilities through gestures or questions.

Among the several individuals with disabilities at the hearing, Alex Birnel with MOVE Texas was more direct about the barriers the bill would create for voters with disabilities through additional requirements on those assisting them.

“As someone who uses crutches, I think I know a crutch when I see it,” Birnel said.

They’re expected to be joined in their opposition by the League of Women Voters, which has previously said any good in the bill is outweighed by problematic provisions; progressive groups worried that voters would be thrown in jail for making honest mistakes; and organizations with long histories of fighting unlawful voting restrictions, including the Mexican American Legal Defense and Educational Fund and the ACLU of Texas.

The clock is ticking on the legislation, but the hostility building toward the bill could reach a fever pitch in the waning days of session.

SB 9 faces several procedural hurdles to be considered by the full House. First, it must be voted out of the House Elections Committee ahead of key weekend deadlines to get on the full chamber’s agenda. Then, it will need to get on a House calendar and be approved by the full House before a midnight deadline on Tuesday.

That rush was apparent on Wednesday when Klick took the unusual step of closing registration for members of the public wishing to testify half an hour into the 8 a.m. hearing. A motion to reopen registration by state Rep. Art Fierro, D-El Paso, was not immediately recognized. More than 200 people registered their opposition to the bill, with more than 100 signed up to testify before the 8:30 a.m. deadline.

The episode served as a potential preview of the simmering partisan tensions the bill could stoke in a Legislature historically roiled by electoral issues. The Texas Democratic Party, which opposed the legislation, pounced on the decision to cut off witness registration, claiming Republicans “intend to silence the voices of Texans” who want to speak against the bill. Soon after the committee took a break so members could join their colleagues for the House’s regular agenda, a coalition of 15 progressive and voting rights groups sent a letter to the committee imploring them to reopen registration.

“As you saw this morning, interested parties traveled from all over the State, many leaving home as early as 4:00 am this morning to be heard on this bill,” they wrote. “These folks have gone out of their way to be with us here in Austin today, including some people who have taken off time from work and spent money on childcare, travel, and other expenses in order to speak with your committee.”

Democratic state Rep. Philip Cortez, who is presiding over the hearing as vice chair, said Fierro was not recognized because he hadn’t discussed with Klick what the motion would entail for reopening registration. The committee is working to vote the bill out at the end of the marathon hearing that’s expected to go late into the evening, Cortez said.

HOUSTON — Authorities say three suspects have been arrested in the investigation of at least seven drugstore armed robberies... read more