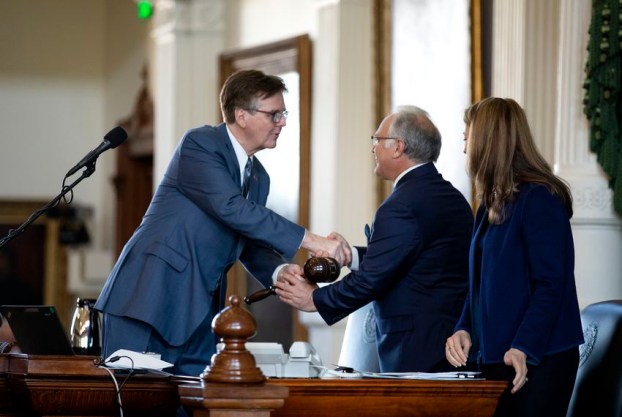 ANALYSIS: A rumor of a game of succession in the Texas Senate

Lt. Gov. Dan Patrick has denied he’s going to leave his state gig for a post in the Trump administration. His aides have denied it, too, some of them adding a layer of umbrage for reporters who would dare ask about such a ridiculous thing.

You have no idea how many ridiculous things we ask about. And how many of them turn into stories. Like that crazy one about then-Gov. Rick Perry running for president. Or that time when a state senator who had never been on a ballot outside of Houston thought he could take on three statewide elected officials, including a sitting lieutenant governor, and win a Republican primary for lieutenant governor?

Perry did run. Twice. And Patrick won that 2014 primary and the general electionthat followed.

The Washington rumors about the lieutenant governor aren’t new, yet they have persisted. Patrick missed the first day of this legislative session for meetings with aides to President Donald Trump at the White House. When he got back, questions about his intentions and ambitions were common — so much so that he addressed the topic in an appearance before a trade group, the Texas Realtors: “I’ve not been offered a job, I’m not gonna take a job, I’m not interested in taking a job. Just end the rumor,” Patrick said. “It’s crazy. It’s out of control.”

Then it came up three months later, in an interview with Lubbock radio host Chad Hasty after Kirstjen Nielson was ousted as Homeland Security secretary. “I’m not going to Washington,” Patrick said. “I’m staying here.”

And now, in the waning days of the 86th regular legislative session, the murmurs continue.

So, this is about what the hot rumor — hotly denied — would mean if only it were true.

Who would replace Patrick as lieutenant governor and — more to the point — how would that work?

The first thing that would happen is that the president pro tem of the Senate — that’s currently Sen. Kirk Watson, D-Austin, but will soon be Sen. Joan Huffman, R-Houston — would become the presiding officer of the Senate. And assuming Patrick stepped down after the current session ends later this month, it would be the interim presiding officer’s job to call the Senate back to Austin to choose one of the 31 senators to run things until voters elect a new lieutenant governor.

If that rings a bell, it’s because this is what happened when Gov. George W. Bush became president and Perry, then lieutenant governor, took his place as governor. Then-Sen. Rodney Ellis, D-Houston, became lieutenant governor long enough to drink a cup of coffee, and the Senate elected one of its own — Bill Ratliff, R-Mt. Pleasant — to serve until the next general election.

In Ratliff’s case, that happened to be the rest of Perry’s term as the lieutenant governor. The 2002 election put David Dewhurst into office, and he served until Patrick defrocked him in 2014.

But Ratliff grabbed the upper chamber’s gavel in the last days of 2000, and Perry had already served half of his four-year term. That’s why Ratliff served as lieutenant governor during a regular session of the Legislature in 2001.

In the present case/fantasy/fandango, Patrick has not yet served half of his term. If he were to move to some fancy office in Washington, the Senate would elect someone to serve until the 2020 elections put someone else in the job. That person would preside over the Senate during the next scheduled legislative session in 2021 — not a small thing, since the order of the day will be to draw new political maps for the state’s congressional and legislative delegations.

This interim lite guv wouldn’t have the clout Ratliff enjoyed, if only for a little while. And Texas would have a higher profile statewide race in 2020 than usual. After the races for president and the U.S. Senate, the next statewide contest is for one of three seats on the Texas Railroad Commission. In political terms, that’s ordinarily a junior varsity game.

But a race for lieutenant governor in an otherwise off year could be interesting, pitting lots of people who want to move up against one another. Senators are always interested, and Republicans like Kelly Hancock of North Richland Hills and Lois Kolkhorst of Brenham get mentioned by the speculators. So do the Republican statewide-officials-in-waiting, like Comptroller Glenn Hegar, Land Commissioner George P. Bush and Railroad Commissioner Christi Craddick.

It’s a road test, in some ways, for the fuller set of statewide offices that will be on the ballot in 2022, from the governor’s office on down. It would start that cycle a couple of years early.

It’s fun to talk about. But don’t think on it too much. It’s just a rumor.